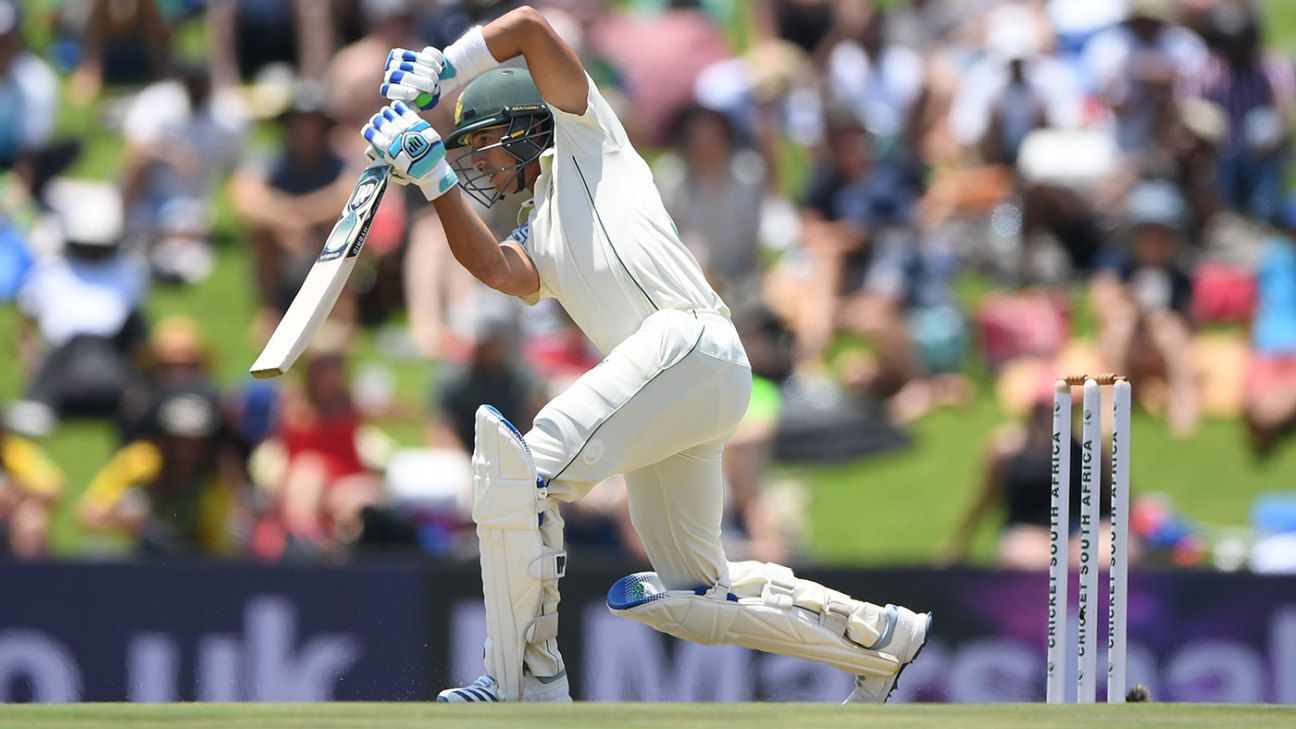 Zubayr Hamza knows how to hold a pose.

He stood, in the final flourish of his drive, when he hit Jofra Archer through the covers.

He stood even longer when he timed Archer sweetly down the ground.

And he stood longest of all when he bisected extra cover and mid-off off Stuart Broad, feasting on the fullness and relishing the aftertaste.

Hamza will likely be ragged about that for many innings to come, but only because he was out to the next ball. He fished at a wide delivery that he could have left but that doesn’t change the fact that he looked South Africa’s most fluent batsmen, if not their most successful.

If anyone came back from India with their confidence intact, and maybe even slightly elevated, it was Hamza. From the ruins of Ranchi, with the series lost and South Africa dismissed for their lowest first-innings total on the tour, Hamza scored his first half-century, in his second Test. He held his own against the Indian pacemen who were more threatening than their spinners (yes, really) and came into his own against R Ashwin. Hamza showed himself to be technically sound, aesthetically pleasing and deserving of a decent run in a line-up searching for its new No.3.

This series is his chance to secure the most prized spot in the side, with his nearest rival Theunis de Bruyn not considered for the first two Tests, and he played with the confidence of a man who knows it.

Hamza would have been permitted a few nerves when he arrived at the crease for the second ball of the match, after seeing Dean Elgar, the most experienced member of the top three, fall victim to a leg-side strangle. Elgar was likely expecting to watch something on a length and outside off carry through to the wicketkeeper as England tested the bounce and carry. Instead, he received a leg-side half-tracker and shaped up to glance it to fine leg. Elgar misjudged, edged and was caught behind to put South Africa in a familiar position: early trouble.

It’s not a place a team that is attempting to rebuild wants to be. It is not a place a relative newcomer may want to be. But it is a place from which reputations can be made and Hamza enhanced his with a commendable, if incomplete, repair job.

Aiden Markram is definitely not a poser, in the non-cricketing sense.

There’s no pretence from the young opener, especially not when it comes to showing how much he cares about his game. Markram was so disappointed with his performances in India. 44 runs in four innings, which included a pair in the second Test – that he punched a wall and broke his wrist. That cost him a Mzansi Super League (MSL) deal and the chance to re-find form in familiar conditions, but it also showed how much it mattered to him. His next challenge is to find balance between the extremes of aggression and uncertainty because as far as ability goes, it’s clear he has it.

Markram’s timing, against Broad in the second over, and his instincts when he pounced on back-to-back James Anderson deliveries, were impeccable. The disdain with which he treated Sam Curran’s loosener showed his appetite for taking the opposition on. But the way the rest of that Curran over played out illustrated where Markram needs to learn restraint. The second delivery was much better and beat the outside edge; this third found it, but fell short of the slips. The fourth was fired into the legs and Markram could not resist taking it on and chipping to midwicket. After cashing in and then surviving, Markram did not want to wait before cashing in again.

At 25, in only his 20th Test, he is still fairly young and will mature. The trouble is that South Africa needs his growth to happen now and his confidence to come quickly, especially because half of their top six is even more inexperienced. Rassie van der Dussen is the last of the green crop and his debut knock does not need to be overanalysed. It won’t go unnoticed that he took 34 balls to score 6, a scoring rate for which the man he replaced, Temba Bavuma, was often criticised. Van der Dussen had reason to be circumspect – South Africa were 71 for 3 in the morning session when he was called upon – but he will know how the go-slow has haunted Bavuma, who may yet recover in time for the second Test.

And then there is Quinton de Kock, who doesn’t care much for posing either.

De Kock rescued the innings from 111 for 5 through a combination of bloody-mindedness and luck and a selection of strokes that were both foolhardy and fantastic. He began with five boundaries, three off one Curran over and one-off Broad. De Kock’s most assertive shot was his fifth, a slap to third man off the stand-in spin of Joe Root, which took him to 21. Root could have ended his innings two balls later, when de Kock top-edged but the ball landed safely between mid-off and mid-on.

Curran was dispatched for two more boundaries but then Root created another chance, when de Kock, on 35, edged but the ball was deemed not to have carried to Ben Stokes at slip. Another two edges off Anderson followed – the first flew over the cordon, the second scooted past gully before Root had a third bite. De Kock, on 45, top-edged a paddle sweep that once more eluded Stokes at slip.

Four balls later, de Kock brought up the only South African half-century of the day and it was cheered with the gusto a hundred would have received. Still, things did not exactly get easier for de Kock after that. He was on 59 when he almost dragged an Archer delivery onto his off stump.

It was only after the tea break, with the Centurion sun belting down, the opposition attack fighting dehydration and one wicket between de Kock and the tail, that he owned a period of the day. He lashed out – at Broad, at Anderson the tail, at anything that suggested there were runs to be had – until Curran nicked him off just as the heat was cooling and South Africa were starting to feel settled. De Kock was five short of what would have been a third century this year. He was applauded off but some of the gusto was gone.

South Africa’s day did not have a final sting – quite the contrary as Kagiso Rabada was bowled off the final ball – but they will not be entirely unhappy with how they finished, even though the best batting conditions are still to come and England will be able to make use of them. But nor will South Africa be able to go so far as saying they have repaired their confidence just yet. For now, they’re still posing.