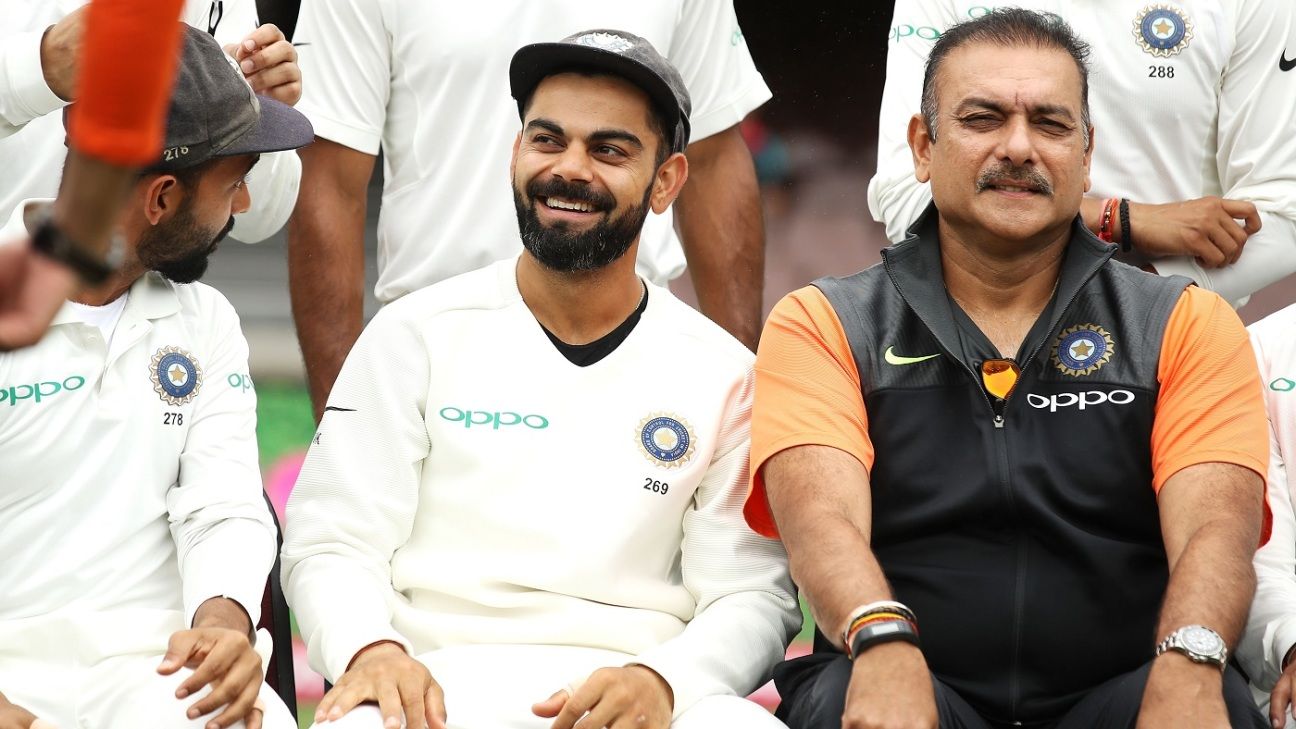 India’s captain and coach are both World Cup winners, but they rate this series win in Australia higher than those triumphs, albeit for different reasons. Ravi Shastri, the coach, was part of the India squad that won the 1983 World Cup although he didn’t play in the final. Virat Kohli played through the 2011 World Cup that India won.

“I was part of 2011 World Cup team,” Kohli said, “but I didn’t have the emotion of not having been able to win a World Cup before. Playing at home and winning it eventually… a lot of the senior players had that emotion. So, for them it was really hard, as to what ‘we have achieved’. Yes, it was a great moment for me to be part of but if you ask me which moment is more emotional, I would say this one because this is my third tour here and I have seen with experience and being in the field as to how difficult it is to win here. And all the struggles that we have gone through in the past 12 months as well as the team.

“So from that point of view this one is more emotional to me. Definitely will be more special, purely because of the fact that we really wanted to win a series away from home. We didn’t want to be a one-match wonder kind of team. So, having stuck to our task and executed what we wanted and gotten the result, we, as a team, feel absolutely complete now that we have done what we set out to do, not to show to anyone else but to prove ourselves that yes, we could do it and we have done it. From that point of view this one is more special for me.”

To Shastri, this is a win achieved in a purer format. “I will tell you how satisfying it is for me,” Shastri said. “World Cup ’83, World Championship ’85. This is as big, or even bigger, because it is in the truest format of the game. It’s Test cricket, which is meant to be the toughest.”

There was the usual combative reaction to criticism – Shastri took another potshot at Sunil Gavaskar’s criticism, calling his shots “blanks” that are “blown away like a tracer bullet” by the time they reach the southern hemisphere – but there was a genuine feeling of relief and pride in Kohli. All the psyching up he had to do, all the efforts put in to not let the mind wander ahead of himself, could now be laid to rest. He was asked about his comments before the Test that history doesn’t mean much to him.

“We all play mind-games, don’t we” Kohli said with a smile. “Look, it’s obviously a very proud moment, more so because for the last 12 months, we understand what we have gone through as a team. We understand the kind of cricket that we have been able to play, and I was just mentioning the fact that after losing tosses, we have been in competition throughout in the games that we have lost. We understood as a team we were on the right track. But the fact that what has come in the most historic series for Indian cricket is cherry on top of the cake and something that, as I said, in the 10 years that I have played, is the proudest moment that I have experienced.

“I am so happy for the whole team because a young bunch of guys, to have that belief and to keep striving for excellence on a daily basis and to get a reward like this, we definitely have to be happy. Although changing history or creating history is still not what I am thinking of, it is pure satisfaction of the hard work of 12 months, to understand that what we believed in has been proven right and regardless of the whole world being against you, if you are striving in the right direction with good intent, God’s going to reward you. So that’s what I am more happy about.”

“So history does matter?”

“Of course it does.”

Shastri, though, continued to be caustic. He was asked if he would like to share this success with captains who – from Lala Amarnath to MS Dhoni – tried their best to win in Australia but couldn’t. “Past is history, future is a mystery,” Shastri said. “Okay? We have won today after 71 years, I’d like to live in the present. And salute my captain for being the captain of the team that beat Australia for the first time in Australia in a series.”

When talking about the satisfaction of winning this series, Shastri again referenced teams from the past, and also said Kohli shows more passion for Test cricket than any other captain in the world.

“I don’t think anyone plays Test cricket with more passion than he [Kohli] does,” Shastri said. “At least I don’t see any other international captain coming close to him on the field when it comes to showing that passion needed to play the game. He is very expressive, which is different to others. Other captains could have different personalities but Virat is someone who is in your face and it rubs off on all the youngsters who are watching the game in India. His entire team-mates that watch him, they want to emulate him. And to believe that they can be someone like him who can go out there and strive for excellence.

“So when an individual puts his neck on the line as captain then the others follow. And you have seen that transition happening over the last two-three years where guys in the team have become more and more confident, about their own ability and the ability of the team as well and it’s made all the difference. I said in Melbourne – I think I mentioned people taking pot shots and firing blanks. I wasn’t joking there, because I knew how hard this team had worked. When you fire from there, by the time it crosses the southern hemisphere, it’s blown away by the wind like a tracer bullet. But led, with something in it, can be pretty serious. And that’s what we have fired right through the series against Australia. We were committed, and it jolly well bloody made a difference at the end of it all.

“This is not a team of gods or demigods, seniors or juniors. This is an Indian cricket team that will jump over a cliff to win a match for the country. And that’s the determination, that’s the ruthlessness, that’s the mindset with which this team went to play in this series. And hats off to them to show that courage. Today I can say I am proud of my boys and I can also tell them one thing which Virat touched in the presentation – that this team now has an identity to look at any other Indian team from the past in the eye and say, ‘We play proper Test match cricket. You did, we did too,’ without being intimidated.”