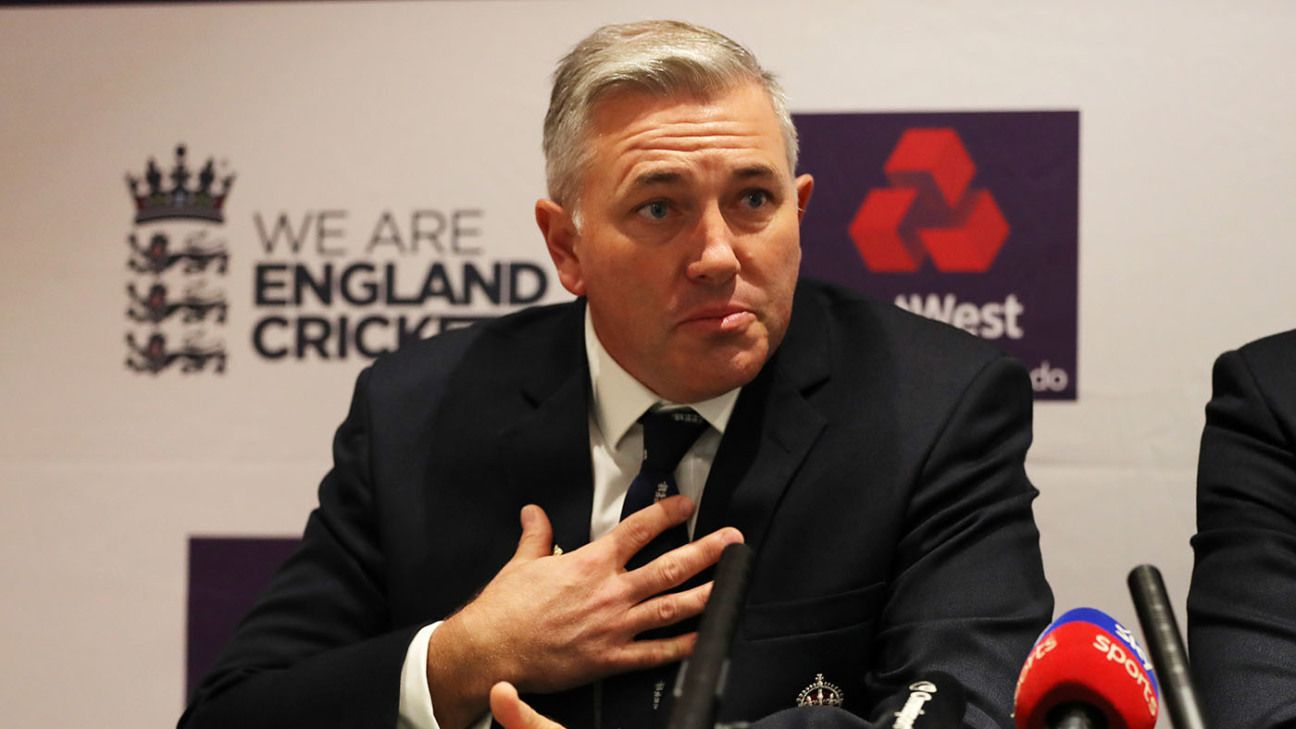 Winning back the Ashes in Australia is top of Chris Silverwood’s to-do list in his role as England’s new head coach.

Speaking to the media for the first time since the ECB announced his elevation from the position of bowling coach to head coach across all formats on Monday, Silverwood said his priority was to work with Test captain Joe Root in driving the success of his team, which is ranked No. 4 in the world and saw Australia retain the Ashes in England for the first time in 18 years after a drawn series last month.

“Job No. 1 would be helping Joe, putting a lot of support around Joe, making sure that the Test team starts moving forward and we keep moving forward, but in two years’ time when we go back to Australia, we can make a real impact out there,” Silverwood said.

“The relationships certainly between myself and the two captains is key but equally I’ve got strong relationships now with all the players and all the backroom staff. I understand how the system works and how the team works as well, so I think the continuity from me as a person to the players is key.”

Silverwood, who emerged as the frontrunner for the job last week after Alec Stewart pulled out of the recruitment process and Gary Kirsten was also interviewed, said he was comfortable with the increased responsibility of his new role, not least of which will be addressing concerns over England’s unsettled Test batting line-up.

“The step up, obviously there’s going to be a lot more responsibility, obviously I’ve got to deal with you guys [the media] a lot more, which is fine, that is something I will feel my way into, but from a relationship point of view, not a lot will change,” he said. “I will have to step back a little bit, but equally, I want them [players] to know I am available and accessible to them as well.

“I’ve already got some very good coaches around me, which is key for me as well, and some good people out there to give advice, but equally we’ll be looking to put the right people in the right places in that batting line-up and push the Test team forward.”

Managing Director of England’s Men’s Cricket Ashley Giles said Silverwood would have a strong support network, including batting coach Graham Thorpe and Paul Collingwood, who has worked with the team as a contractor over the past year and is poised to be added to the coaching staff full-time. Giles also remained steadfast in his belief that there should be one coach across all three formats.

“I think one man should lead,” Giles said. “The important thing around that one man is having the diversity in thought in the individuals who support him. So he’ll have a good group of coaches working under him. We are crossing the t’s and dotting the i’s on, hopefully, Paul Collingwood joining us full-time and Graham Thorpe is obviously there, has been there for some time.

“Those two guys will offer Chris a huge amount of support and knowledge and knowledge of different experiences. The bowling coach position is obviously now vacant. I would like Chris to have a massive say in who that person is.”

The 44-year-old Silverwood became England’s full-time fast bowling coach at the end of 2017. After his retirement from playing, Silverwood joined the coaching staff at Essex in 2010. He was appointed head coach ahead of the 2016 season, leading them to promotion that year and then on to the Championship title in 2017. Essex won the Championship again in 2019 with Anthony McGrath as head coach.

On announcing the appointment, the ECB cited Silverwood’s intimate knowledge of the current England set-up along with his strong relationships within the county system, forged largely during his time at Essex, and Giles emphasised those credentials.

“He’s a winner,” Giles said. “He could only prove that where he’s been able to prove it and that’s in the domestic game but the job he did at Essex was fantastic and we’re still seeing the legacy of that now. The sign of a good coach or a good manager is leaving a team in a better state than you found it and that team is still moving on without him at the helm.

“No disrespect to Anthony McGrath or anyone else at the club right now but that’s his work still in action. His relationships and his knowledge of what we’re doing is really important but I think next to me here we have an exceptional bloke who cares deeply about what we’re doing and is a very good coach.

“You can only be tested within the environments you’ve worked and he couldn’t have worked in a more pressurised environment, whether he was head coach or assistant coach, this summer, as a World Cup and an Ashes summer, and he’s proven he can deal with that.”

Silverwood’s first competitive series at the helm will be England’s tour of New Zealand, which includes a five-match IT20 series starting on November 1 in Christchurch and two Tests against the Black Caps from November 21.