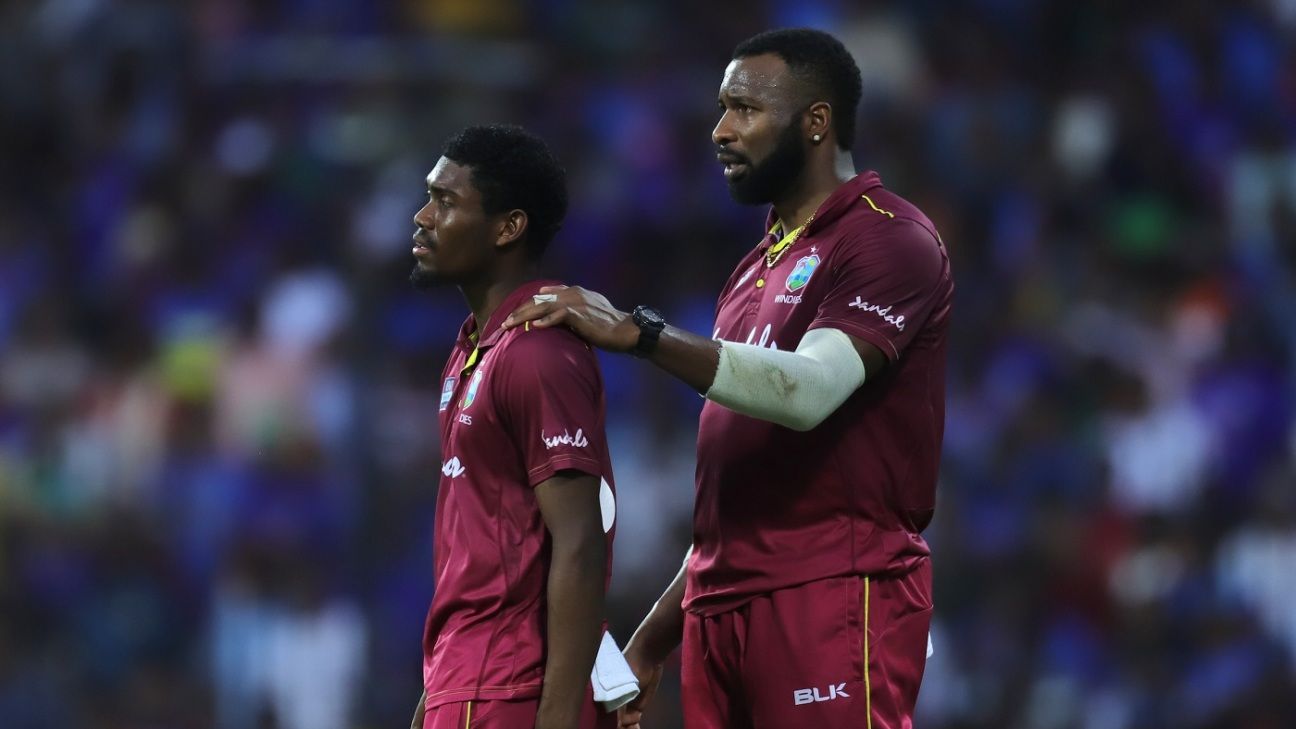 They may be defending champions but West Indies won’t be “overwhelming favourites” at the men’s T20 World Cup slated to be held in Australia in October-November according to chairman of selectors Roger Harper.

In 2016, Darren Sammy’s West Indies became the first team to win two World T20 titles (they’d previously won in 2012). Over the last four years, their fortunes have plummeted; they’re currently ranked No. 10 in the format.

“You have to be realistic here,” Harper told Trinidad-based radio station i9555 fm last week. “We are the defending champions, yes, but at the same time we are not the No. 1-ranked team in the world. That in itself says what has transpired since we won the last World Cup.”

West Indies have a ray of hope, though, with new captain Kieron Pollard, who recently played in his 500th T20 game, joining hands with Dwayne Bravo – among the seniors to make a comeback – to chart a revival.

Pollard took over the ODI and T20I captaincy from Jason Holder and Carlos Brathwaite respectively last September. As part of their plan to bring in experience to mentor youngsters, Bravo was brought out of retirement.

“My memory doesn’t tell me exactly where we were ranked that time but the team [in 2016] we put out for that World Cup was filled with a lot of very experienced T20 specialists,” Harper said. “Now we have a little blend of a few experienced T20 players and some of the young guns coming through.”

The rankings notwithstanding, Harper felt West Indies still remain a threat at the T20 World Cup, which is in considerable doubt due to the Covid-19 pandemic. While the ICC and the event organisers remain optimistic, they aren’t in a hurry to make a definitive decision yet.

“Don’t get me wrong, I still think we have a good chance of winning the tournament, but I don’t think we would be going into the tournament as overwhelming favourites,” Harper explained. “I think it’s a matter of getting what we think is our best squad, picking our best XI for each game, looking forward to them performing at their best and making smart decisions and winning the critical moments.”

In their most-recent tour, just before cricket came to a grinding halt across the globe, West Indies endured mixed results against Sri Lanka. They lost the ODI series 3-0, but bounced back to register thumping wins in the two T20Is. Despite the results evening out, Harper saw some positives, especially in the batting department.

“In terms of result, it fluctuated but one thing that has been relatively consistent is the way the team has batted,” he said. “[Of late] we have seen the consistency in batting with the white-ball team, both in 50-over and 20-over games. We identified that bowling at times wasn’t as sharp and as smart as it needed to be.

Harper also hoped to see West Indies becoming a better Test side, and for that, simply having a “scattering of world class players” wasn’t going to be enough.

“If you are just making 30s, and the press is slamming that he deserves a strike… I would like my job to be that I don’t have to pick somebody. If you are making 30, we have a person who is making 31, then I have to decide which one to select.

“But if you are averaging in the 60s or 70s, all I have to do is write your name down, you pick yourself. That’s what we have to encourage our players to do: think bigger, aim higher, think of putting in world-class performances and raise their standards to be match-winning world-class players.

“What I have found is that at the U-19 level, we can compete with all the teams around the world but then a lot of those players from other teams make a huge jump from U-19 to the Test team and look completely mature and different.

“We have to ensure our guys can make that leap as well. A lot of it has to do with their thinking and maturity in terms of cricket. We have to help them along by developing their mental skills and tactical awareness, and help them apply their skills better.”

Harper felt it was also the responsibility of the islands to groom their young players instead of doing “buck-passing” to Cricket West Indies (CWI).

“I think a lot of buck-passing has been done. We are very proud to say when a Brian Lara is breaking all those records that he is from Trinidad but when a player is not doing well, you say what the West Indies cricket board is doing. I think there is some inconsistency and we need to get back what we were doing in the past and take the responsibility of developing quality, world-class players.”