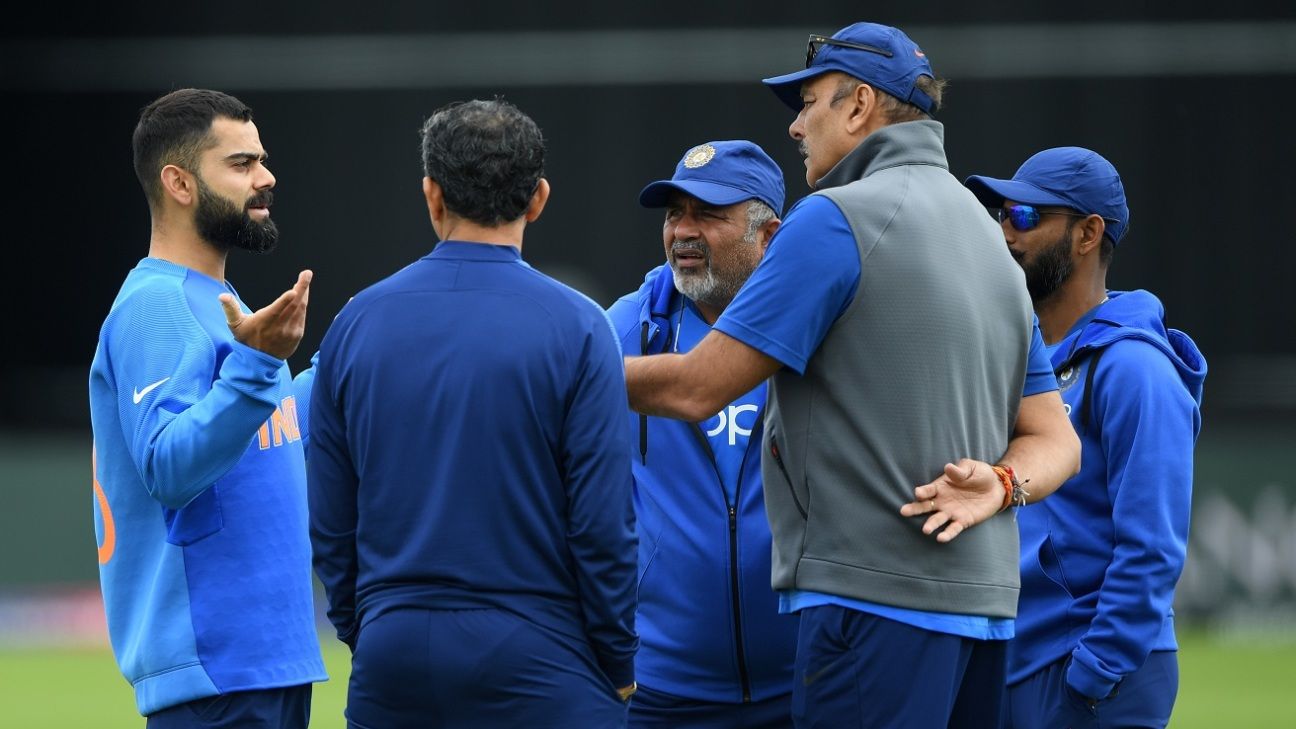 The BCCI has called for applications for the entire roster of support staff for the India senior men’s cricket team, which ended its World Cup 2019 campaign with a semi-final defeat to New Zealand.

The contracts of the coaching staff, led by head coach Ravi Shastri, run up to the end of the World Cup. The BCCI subsequently extended the contracts by 45 days to include India’s tour of the West Indies, which starts on August 3 with the first of three T20Is. Three ODIs will follow the T20Is, with two Tests – part of the World Test Championship cycle – to come after the limited-overs matches.

The applications have been called for the positions of head coach, batting coach, bowling coach, fielding coach, physiotherapist, strength and conditioning coach, and administrative manager, with the deadline being 5pm on July 30.

The BCCI said that the current coaching staff of the team would get “automatic entry in the recruitment process”, but it’s unclear as yet if Shastri, Sanjay Bangar (assistant and batting coach), Bharat Arun (bowling coach), R Sridhar (fielding coach), and Sunil Subramaniam (team manager) are going to re-apply for their positions or not.

Physiotherapist Patrick Farhart and strength and conditioning coach Shankar Basu have both opted not to renew their contracts, and ended their association with the Indian team after the World Cup.

For the position of the head coach, who should be below 60 years of age, the BCCI wants the candidates who apply to have a BCCI Level 3 qualification. Failing that, the person should have played at least 30 Tests or 50 ODIs.

The support staff – with the exception of the team manager – have all had long stints with the team. While Shastri, Bangar, Arun and Sridhar all joined the team in mid-2014 for the limited-overs leg of the tour of England after a heavy loss in the Test series, Farhart and Basu had been part of the set-up since July 2015. Shastri, originally brought in as team director, was not part of the support staff for a year between mid-2016 to 2017, when Anil Kumble was in charge – and neither was Arun – but returned as head coach after that.

The BCCI’s elections are scheduled for October 22, which will also mean the exit of the Supreme Court appointed Committee of Administrators, and CoA chairman Vinod Rai had clarified earlier that until the elections were held, the body would continue to monitor and authorise cricketing operations, including matters related to the appointment or renewal of coaching staff.