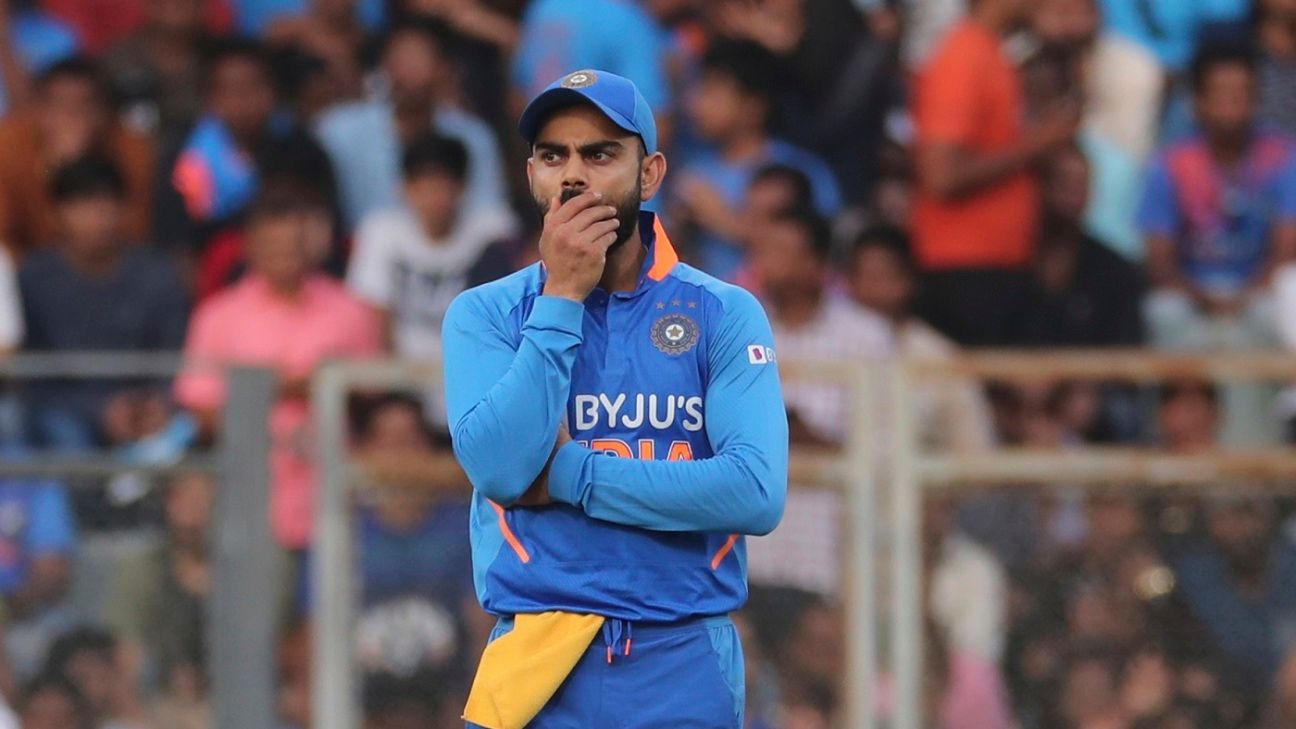 India captain Virat Kohli has said that he will rethink his batting at No.4 after another failure at that position in the side’s ten-wicket defeat in the ODI series opener against Australia in Mumbai on Tuesday.

There has been plenty of chatter around India’s top-order combination, with the return of Rohit Sharma for the three-match series against Australia, and Shikhar Dhawan and KL Rahul being in good form. All three played in the first game, pushing Kohli to No. 4, and with the others also having to move down a place Kedar Jadhav couldn’t fit in the XI.

ALSO READ: When Rahul fell, we lost the momentum – Dhawan

While Dhawan had made 74 at the top and Rahul 47 at No.3, Kohli couldn’t get going at No.4 and was dismissed for 16 by legspinner Adam Zampa. Kohli’s last few scores at the No. 4 position in ODIs read: 16, 7, 12, 11, 3*, 4 and 9, dating back to January 2015. The last time he scored big at that position was way back in November 2014, and Kohli admitted at the presentation that the team had not benefitted much when he had batted at that position recently.

“We’ve had this discussion many times in the past,” Kohli told Star Sports, the host broadcaster, about his batting position. “Because of the way KL has been batting, we have tried to fit him in the batting line-up. Having said that, I don’t think it’s quite gone our way whenever I’ve batted No. 4 so we’ll probably have to rethink about that one.

“All in all it’s about giving some guys opportunities and you’ll never know if this works or not if you don’t try. It’s very easy to just go with one template and just follow it non-stop. I think people need to relax and not panic with one game, I’m allowed to experiment a little bit and fail as well at times. You lose games here and there but today was one of the days where it didn’t come off.”

Dhawan also said where Kohli batted was “the captain’s choice” and that the team had been doing well of late, which didn’t give them a reason to worry yet.

“It’s just one bad day at office,” Dhawan said. “We played well against West Indies as well, where all the batsmen did well and as players, we don’t focus too much on facts that are not happening. Shreyas [Iyer] has been doing so well, he is a young lad, whose one-odd innings could go here and there. As a team we back each other and we don’t focus too much on a loss. It’s alright. They played really well. We were a bit unlucky as well, like a few top edges went here and there, they didn’t go in the hand, but they played well.”

India have been flexible with their top order in T20Is too, in recent times, with six different players occupying the No.3 spot in India’s last six (completed) games in the shortest format. Wicketkeeper-batsman Sanju Samson was the latest to the trialled in that spot in Pune last week. In Thiruvananthapuram against West Indies last December, it was batting allrounder Shivam Dube who had made the most of the promotion by cracking a 30-ball 54. Then, in the second T20I against Sri Lanka in Indore, Shreyas Iyer pitched in with a fluent 34 to hasten India’s victory. Apart from Kohli, Samson, Dube and Iyer, Rahul and Pant have also batted at No.3.

“See, it is more to give players [game-time], like how Sanju Samson came in today (at No. 3), then Shreyas [in Indore], so they can get more time in the middle, because it is totally different feel when you are batting in the match and having more overs and so that was the reason today,” Dhawan had explained after India clinched the series 2-0 against Sri Lanka in Pune.

“Even Manish Pandey went up [the order]. So, they can have more time, otherwise it’s the same pattern [that’s] going on. In these series, we can do the experiment, it is best time to experiment and once we know, ‘okay that this guy is clicking’, then we are going to go ahead with those pattern[s] again.”