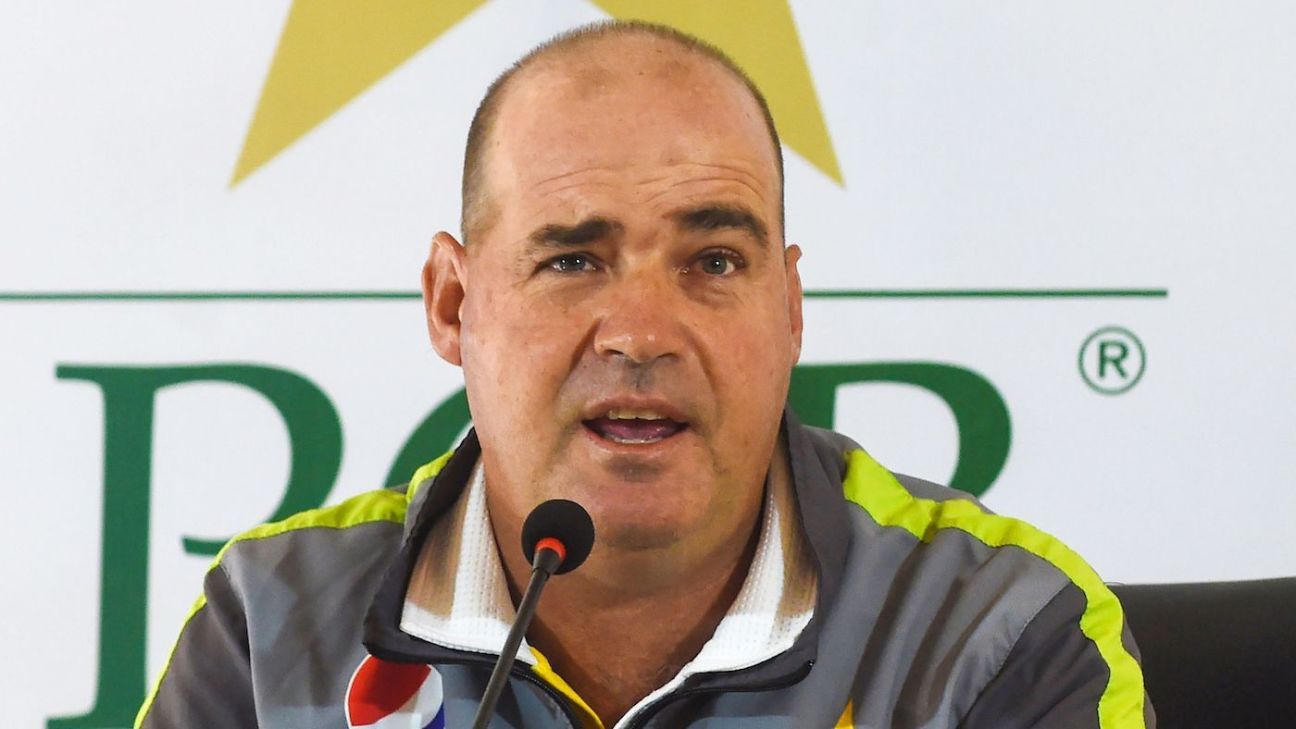 With under four months to go for the World Cup in England, Pakistan head coach Mickey Arthur has said the selectors and team management will look at the upcoming PSL and the ODI series against Australia before finalising a squad of 15 for the global tournament. Pakistan play 10 ODIs before the World Cup – five against Australia in the UAE after the PSL and five in England in May – and Arthur said he and chief selector Inzamam-ul-Haq had 19 players in mind and would want to have two game plans in place for the conditions in England during the summer.

“Inzi and I have been on the same page for a long while here. And I’m going to be honest because I’ve told the boys in the dressing room the same thing the other night,” Arthur said in Lahore after returning from South Africa. “I think we’ve got probably 19 players for 15 positions. PSL always throws up one or two good individual performers, so we are going to have a look at some of our borderline players, the guys that we are not sure about. We have to look at them during the Australian series and then we will make our minds up leading into England, obviously we will be taking 15 there. The key is players get clarity in terms of their roles and role clarity is particularly important.”

Pakistan have given opportunities to youngsters with the advent of the PSL in the last couple of years. With the T20 league starting in under a week, players will want to impress the selectors particularly for slots in the middle order and the fast-bowling attack. The current probables for the pace attack comprise Mohammad Amir, Shaheen Shah Afridi, Hasan Ali, Usman Shinwari and bowling allrounder Faheem Ashraf. Among the spinners, Shadab Khan and Imad Wasim are the likely candidates to make the trip to England.

“The other thing that’s important for us is having an option with two game plans,” Arthur said. “I’m saying two game plans because the weather in England at any given time is very unpredictable, so we need an option where we have our spinners, who are able to suffocate through the middle [overs] because the key for us to win one-day games is about taking wickets through that middle period.

“Either we do that with two spinners or little bit of reverse-swing if the weather stays dry, or if the weather is wet over that period of time there we have to have an option of a seam-bowling allrounder who can come in and bat at No. 7 for us. So we’re very close, we’ve covered all our bases in terms of our personnel at the moment.”

Pakistan fought hard against South Africa in the ODIs, losing the series 3-2, but their form since they won the Champions Trophy in June 2017 hasn’t been impressive. They have won 15 of their 27 completed matches since then, completing series wins only against Sri Lanka, ranked eighth, and Zimbabwe. In this time they were also blanked 5-0 in New Zealand a year ago, won matches only against Hong Kong and Afghanistan in the Asia Cup in September, and drew the three-match series 1-1 against New Zealand in the UAE in November.

Looking back at the South Africa tour, where Pakistan lost the Test series 3-0, ODIs 3-2 and T20Is 2-1, Arthur said he was proud of the way the team showed their “passion” and “intensity”.

“I just think it is really important that I reiterate how proud I am of the cricket team,” he said. “We were two months away on the road. Four-and-a-half months away is a hell of a long time and the intensity and the passion that these guys trained with has been fantastic. So, look I am very very proud, players are very proud, of the development of the lot of our young players.

“We’ve played the most cricket over the last four-and-a-half months than any other team in the world. That’s not an excuse, I’m not using it as an excuse because that’s the way it is. We’ve got to handle that. India have a large pool of players available to them. We didn’t rotate our players as much because we are in a process, we need to educate them in all conditions so that’s exactly the decision we’ve made.

“Our planning is done. We’ve got our schedules, we’ve got everything in place leading upto the World Cup. Myself, Inzamam and Sarfaraz [Ahmed] have been completely united in the process that we are going forward.”

Even though Sarfaraz’s own form has been under scrutiny, he recently got the backing of the PCB to lead the team in the World Cup. He has averaged only 26.62 in 12 ODI innings over the last year, scoring only one half-century. But with his replacement Mohammad Rizwan not impressing much with the bat in two ODIs and three T20Is against South Africa, the pressure on Sarfaraz was not mounting and Arthur, too, backed the captain primarily for his wicketkeeping skills and form.

“It’s very simple, we need to be very fluid with out game plans,” Arthur said. “Sarfaraz has done exceptional work for us up and down the order. I think the thing that we’ve got to realise is over a long tour, form comes and goes and players start playing well and then they slip off the radar a little bit, and we need to then be able to send our form players at any given minute. In terms of fluidity in our batting order it’s whoever is in form and what that situation demands at that particular time. If you see all the best teams in the world have the ability to be flexible. We’re trying to be as flexible as we can. If we didn’t give the opportunity to players in those positions we wouldn’t know.

“Sarfaraz will be the first one to admit that his batting form has come and gone. We have worked exceptionally hard on Sarfaraz’s batting going forward. When Sarfaraz plays well, he wins games for us. I want to reiterate I am not worried about Sarfaraz’s form. Sarfaraz Ahmed is a very very good cricketer. He and I work incredibly close together, we’ve got very close working relationship, as good as I had with any captain. I just need to put that to bed.”