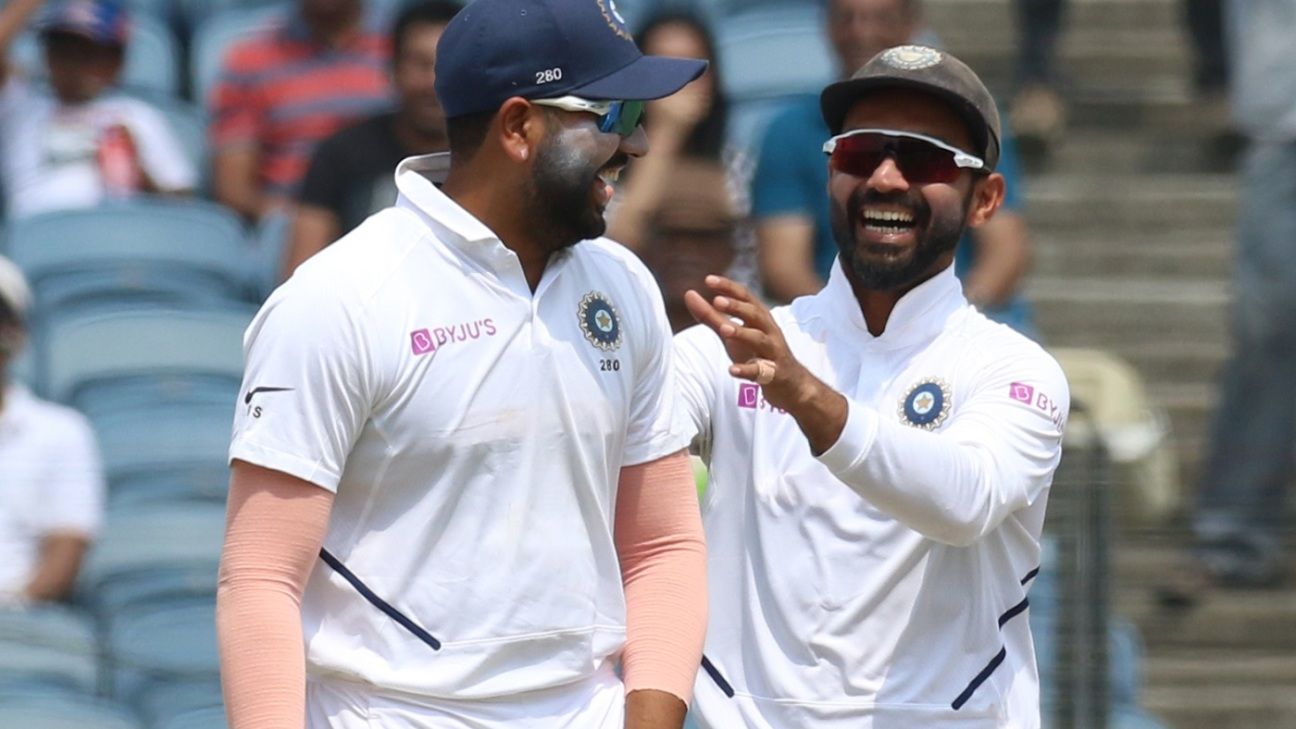 Rohit Sharma had scored three double-hundreds in international cricket before this one in Ranchi, but this was a different experience. This was in a Test match, and when India reached the 50-over mark, he had only scored 107. He got to 200 with an utterly characteristic shot, a pulled six well in front of square off Lungi Ngidi, but he had had to wait a while to play that shot. He spent the entire lunch break on 199, and then had to see off a maiden after play resumed.

“That’s the nature of the game,” Rohit said on the time he spent waiting for his 200th run, after the second day’s play. “You can’t do anything about it. I wouldn’t say it’s frustrating. It’s just the laws of the game. The time [a session] has to finish, it has to finish on that time.

“From my side, I wasn’t thinking about that at all. Because I knew the time will come and whenever it’s supposed to happen, it will happen. I was just trying to be positive, think positive at that particular time. I know it can be frustrating at times but there’s nothing you can do about it. I just went back happy [at lunch], you know, 199 not out, I’d take that any day.”

This was Rohit’s sixth Test hundred, and in the short, stop-start career he’s had so far in the format, he rated this one as his most challenging innings yet. “I haven’t played much, I have played only 30 Test matches. Yes, in terms of what was thrown at me in this particular Test match, I would definitely say that it was probably the most challenging one.”

On the first morning, Rohit watched from one end as India slipped to 39 for 3, with Kagiso Rabada leading a testing South African effort with the new ball. He was then joined by Ajinkya Rahane, and the two resurrected India’s innings and put them in command with a fourth-wicket partnership of 267.

Rohit singled out Rahane’s positive approach after lunch on the first day as a key factor in India regaining the momentum.

“Our plan was very simple,” Rohit said. “When we knew there was something in the pitch for the bowler, we just wanted to respect that spell, and we knew the time will come for us to get those runs in the second session, so we just wanted to play the first session out cautiously, and then see where we stand [at] lunch.

“Once we got out in the middle after lunch, it was Ajinkya who started taking that momentum, and it was he who actually got us the momentum. If I’m not wrong, he was batting on 40 off 43 balls just around the first drinks after lunch, which means we capitalised on the loose balls, we got those singles as well, so the rotation of strike was happening every now and then, which is always good for a batsman.

“When you keep changing strike, it doesn’t allow the bowler to keep bowling there, because different batsmen, different style of play, the bowlers have to adjust their length as well, so I think we did that pretty well, particularly Ajinkya. He came out and started playing his shots, and from there he never looked back. The partnership after that kept growing.”

Rahane made his 11th Test hundred, and Rohit was all praise for his mate’s ability under pressure.

“We’ve seen Ajinkya for so many years, the way his Test career has progressed, and whenever the team has been in a difficult situation, he’s come and rescued us,” Rohit said. “And this isn’t something he’s done just once or twice, he’s done it in many innings. This shows how strong he is, mentally, and how much hunger he has, to be able to steer the team out of bad situations.

“We’ve seen it outside India, we’ve seen it in India as well, so Ajinkya’s Test graph, it’s climbing one step at a time, and there can’t be anything better for the team, because if your middle order is strong, whatever situation comes, you’re confident that one guy will always put his hand up and take the team forward.

“The partnership Ajinkya built with me at that moment, it was very crucial from the team’s point of view. We’ve played together quite a bit, so we have a good understanding, which singles to steal, which runs we shouldn’t go for, we had quite a bit of communication going on those things, and I’m happy that he’s made a hundred, he was really looking forward to making a big score, and he’s done it now. There was no doubting his ability at any given stage, and again, carrying from where he left in the West Indies, he’s in great form and it just augurs well for the team.”

Bad light ate away most of the post-tea session on day one, and India’s approach on day two was influenced by the knowledge that the same could happen again. It panned out exactly that way, and India, having declared at the stroke of tea, got just five overs to bowl to South Africa, in which they dismissed both openers.

“In India, if you want to win the Test match, you’ve got to bat five sessions, get as many runs as possible, so that was the idea,” Rohit said. “[Rahane and I] wanted to bat long and see where we stand the next day, which is today, during lunch, and then we can take the game forward.