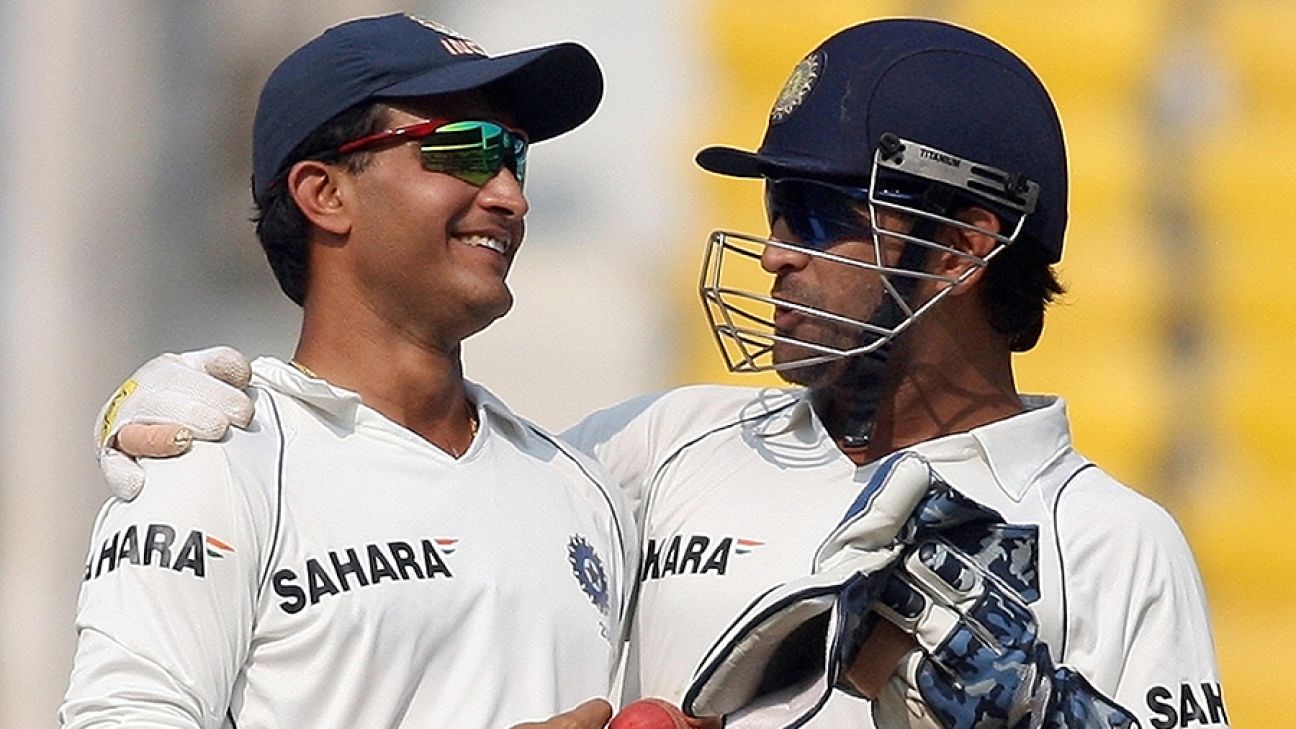 In November 2008, Indian cricket witnessed one of its more poignant sights when Sourav Ganguly was asked by MS Dhoni, the captain, to lead out the Indian team in the closing moments of Ganguly’s farewell Test. The back story to that decision added to the sentiment of the moment – earlier that year, Dhoni had not picked Ganguly (and Rahul Dravid) in the ODI squad for the tri-series in Australia, forcing Ganguly to return home when the Test-match leg of that tour ended.

Now, 11 years on, the tables have turned to some extent, with Ganguly in a position to influence the final stages of Dhoni’s career, which began in spectacular fashion on his watch. On October 23, Ganguly will take charge as the BCCI president; the next day he will sit with the selection committee to discuss, among other things, Dhoni’s future.

Dhoni has not featured in any limited-overs series India have played since the World Cup, in the West Indies and at home against South Africa. Ganguly has always maintained that Dhoni would need to be clear about the road ahead and communicate that to the team management led by Virat Kohli, the captain, and Ravi Shastri, the head coach, and most importantly the selection panel.

On Wednesday, Ganguly reiterated his stand, saying he would first seek clarity from MSK Prasad’s selection panel. “I need to find out from the selectors when I meet them next. We should find out what the selectors think,” Ganguly told reporters in Kolkata. “It’s not my opinion. I was nowhere in the picture all these days. My first selection committee meeting will be on the 24th.”

He said he might speak to Dhoni if needed. “What he (Dhoni) wants to do, what he doesn’t (want) to do…What matters is what Dhoni wants. Maybe there is clarity between Dhoni and the selectors, but I do not know of it as yet. Neither side has discussed anything with me. They’ll decide on the way forward.”

It’s consistent with his earlier statements on Dhoni’s future, that there was no pressing need for him to leave the game. In March, Ganguly had said if Dhoni continued to be a key performer there was no reason why he should not carry on even after the World Cup. This was weeks after Dhoni finished as the Man of the Series in the three-match ODI series in Australia with three match-turning half-centuries. “Age is never a factor if talent is there,” Ganguly had said.

Post the World Cup, Ganguly said the onus was on Kohli, as captain, to decide on Dhoni’s future. “Virat is very important as to what he is communicating to Dhoni. What he (Kohli) expects of him (Dhoni) is very hard to say. But I don’t think anybody should jump the gun and pass a statement. If Virat and the team management expect Dhoni to come back and play, he will play. If they feel like moving forward, they would move forward. Of course, the selectors will also play an important role.”

Ganguly did point out that Dhoni would need to take that “hard call” every athlete needs to take as the time comes to wind down. But he made it clear that Dhoni was not the “elephant in the room” as far as he was concerned. “I don’t think there is any elephant in the room. Rishabh (Pant) is not Dhoni. Rishabh will not become Dhoni in the next three-four years. It took 15 years for Dhoni to become who he is.”

It was Ganguly as India captain who told senior journalist Pradeep Magazine to watch out for a youngster from Ranchi. Dhoni had impressed Ganguly with his power-packed batting in domestic cricket and he soon made his debut for India under Ganguly’s leadership.

Ganguly would continue to provide confidence, space, and time for Dhoni to convert his raw, brutal strength into something more dependable and consistent. Not just as a batsman but even as a wicketkeeper.

In only his fifth ODI, Dhoni was promoted to No. 3 by Ganguly. In the previous four matches, Dhoni’s highest was 12. In Visakhapatnam, the opponent was Pakistan. Dhoni blasted his maiden ODI century – 148 off 123 – which remains his second-highest score in the format.

Fourteen years on, Dhoni continues to be relevant to India. However, he is 38 years old. The selectors think Pant needs more exposure and time to settle, something Ganguly helped Dhoni with when the wicketkeeper entered international cricket. Once again, Ganguly is around and is likely to play a hand in deciding Dhoni’s fate.