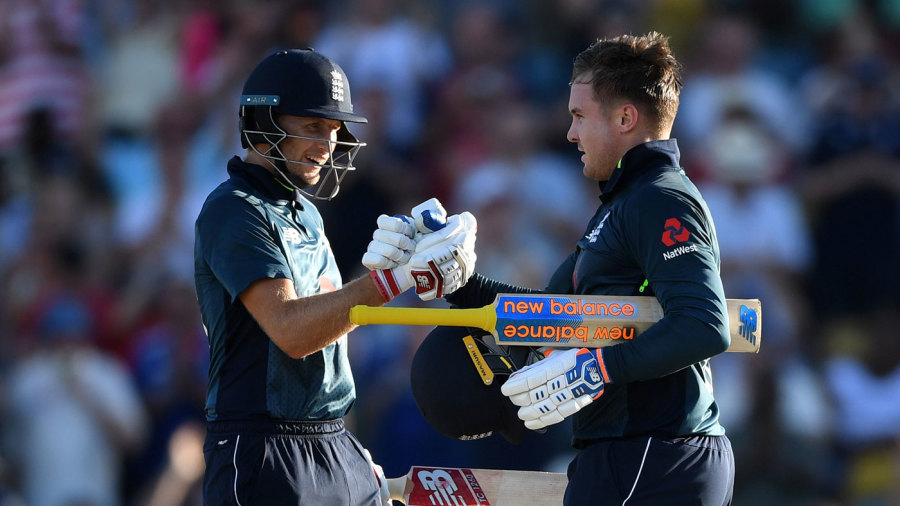 Ahead of the first ODI, West Indies captain Jason Holder said his bowlers needed to be “precise” against an England side that “pack a heavy punch in their batting”, before adding: “The way ODI cricket has gone, 300-320 is par these days.” After watching on helplessly during England’s record-breaking stroll to a target of 361, he may need to revise that up.

With Chris Gayle rising (albeit a little slowly at first) to the occasion on his comeback, like some deep-water leviathan hungry for a sailor sandwich, West Indies made what seemed a good start to the series. John Campbell and Shai Hope took pressure off Gayle early on and while the running was a concern – they only managed six twos – a world record 23 sixes in the innings hinted at the power that has twice made them World T20 champions.

In most circumstances, a total of 360 for 8 is one to be pretty pleased with. But on a Kensington Oval road, against the No. 1 ODI side (whose batting is by some margin their strength), it was quickly shown to be inadequate. West Indies could have made life harder by holding their catches, but with Jos Buttler only required to face one ball and several dangerous hitters below, there was a sense of inevitability about the chase once England had sauntered to 88 for 0 in the opening Powerplay.

England dropped a potentially crucial catch, too, though Jason Roy mostly made amends for putting down Gayle while he was still struggling for rhythm. While several members of the visiting attack went the journey – notably Moeen Ali, off whom Gayle munched five of his 12 sixes – England also had the only two bowlers to concede less than a run a ball, Chris Woakes and Ben Stokes returning combined figures of 18-0-96-5.

Had England lost, Eoin Morgan might have faced more questions about his deployment of Adil Rashid – kept out of the attack until the 34th over, seemingly out of wariness about Gayle, and then asked to bowl right through. But while his bowlers can’t reliably be asked to contain, they do take wickets, and Morgan has proven adept at making best use of his options.

With a rematch on the same ground after just 48 hours’ turnaround, there will be the expectation of further carnage; but while West Indies attempt to engage in bouts of six-upmanship, England’s laser-guided approach looks the more reliable. As Holder suggested, precision – and nerve – will be prerequisite for the bowlers.

Under the harshest of scrutiny once again will be the bowling of both sides. Over the last couple of years, only Sri Lanka have had a worse economy rate in ODIs than England and West Indies. But while England’s combined strike-rate of 36.9 compares pretty well with the best, West Indies only manage a wicket every 49.1 deliveries – a lack of penetration that was in evidence during the first match. Kemar Roach’s injury has deprived them of an experienced option, and while Oshane Thomas bowled quickly and might have had better luck, Carlos Brathwaite was ineffectual in his first ODI in almost a year. For England, question marks continue to hover over Mark Wood and Liam Plunkett, with a Bridgetown local still occupying the thoughts of many when it comes to England’s World Cup squad.

Gayle appeared pretty stiff in the field after his exploits – he had not batted for that long since his double-hundred against Zimbabwe at the 2015 World Cup – and West Indies may need to see how he pulls up. The inclusion of left-armer Sheldon Cottrell would bring some variety to the seam attack.

England may rest Woakes as a precaution, as he manages a longstanding knee problem, with David Willey and Tom Curran in contention to come in. There is no need to tinker with the batting.

The second ODI will see a fresh pitch used, next to the one which yielded 724 runs on Wednesday. With the weather set fair, it could be another day of heartbreak and toil for the bowlers.

“We just didn’t hold our chances and the chances we put down were crucial.”
Jason Holder laments his side’s fielding in the first ODI

“We spoke at the halfway stage about the fact we have been in this situation before and we do believe we can chase big totals. We bat very deep.”
Eoin Morgan sums up England’s no-fear approach