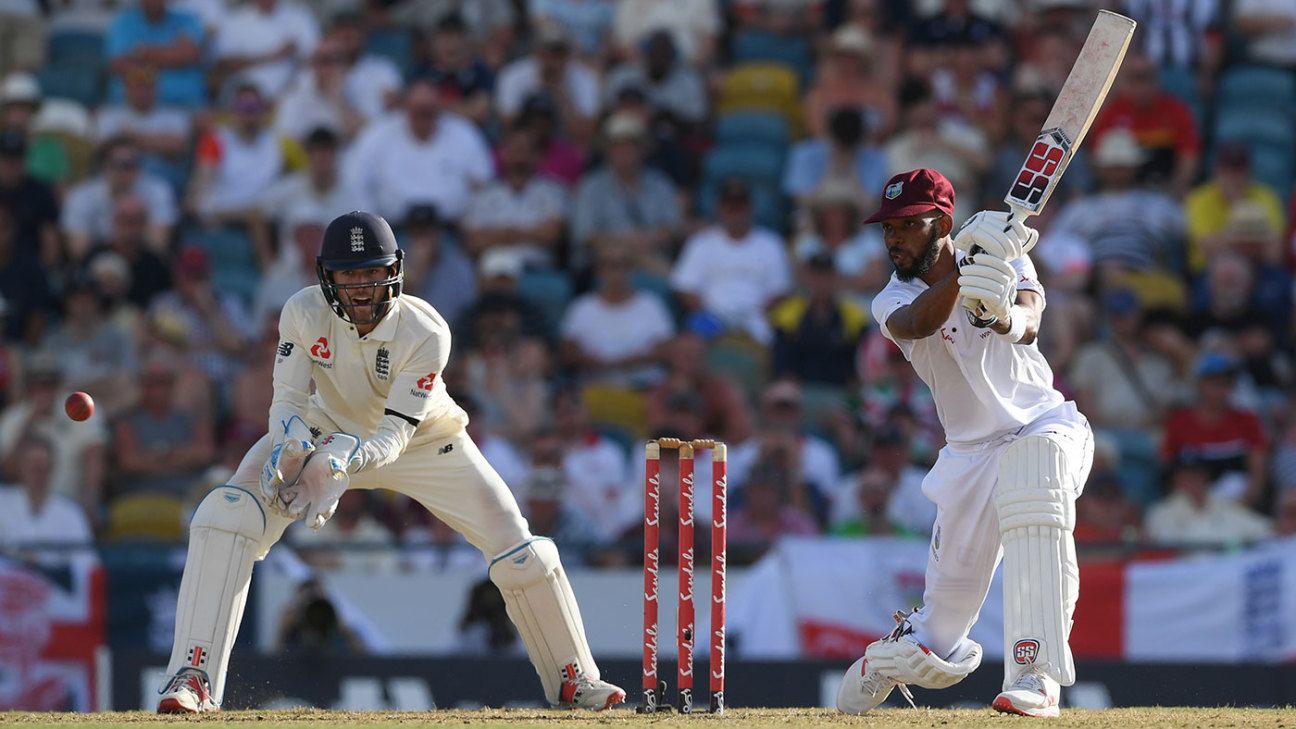 Roston Chase has warned England could face a tough challenge in the fourth innings of the Barbados Test on an “unpredictable” surface. While Chase admitted West Indies were not especially happy about their score at the end of day one, he believes England could struggle against his side’s pace attack on a pitch that may “bounce or keep low”.

Chase had helped West Indies to 240 for 4 with less than an hour of play remaining. But the second new ball, and an inspired spell from James Anderson, saw West Indies lose four wickets for 24 runs in the final 38 deliveries of the day with Anderson claiming three for four runs in 14 balls at one stage.

Underlining the sense that West Indies had failed to take advantage of a strong platform was the fact that Chase, who made 54, was one of five men in West Indies’ top six to reach 40 with none of them so far progressing beyond 57. Shimron Heymyer will resume unbeaten on 56 on day two, however, and provides hope of West Indies reaching 300.

“We lost crucial wickets at the end,” Chase said. “We were looking better when only four wickets were down, but we lost those wickets at the end. Would we have been happy with that score at the start of the day? Probably not.

“But Anderson is a quality bowler. He has 500-odd wickets and he bowled a brilliant spell. You have to give credit to him: he bowled tremendously.

“Hopefully Hetmyer can take on the mantle and see if we can push on to get a good enough score. He has a heavy IPL contract and he’s showing why.”

The final ball of the day also may have given West Indies some encouragement. While it saw Kemar Roach dismissed, the manner of that dismissal – with the ball appearing to spit and rear of a previously sedate surface – suggested this pitch could become ever more problematic for batsmen in the latter stages of the game. And with West Indies fielding four quick bowlers, Chase was confident they could exploit such a surface.

“The wicket has been doing a bit, especially at the end, so we’ll see how it plays on the other days,” Chase said. “The first day is always slow at the Kensington Oval but it quickens up on days two and three. Days four and five are unpredictable and I can’t say if the ball will bounce or keep low.

“I think if the variable bounce comes into play it will be harder to play fast bowling than spin because it’s harder to adjust with quicker bowling.”

Adding a certain amount of insult to injury, Chase also said he “wasn’t really surprised” by Stuart Broad’s omission from the England side. “He wasn’t really playing in the last series, so I thought he was probably out of form a bit,” Chase said. “I thought they would give the youngster Curran the nod and so it happened.”