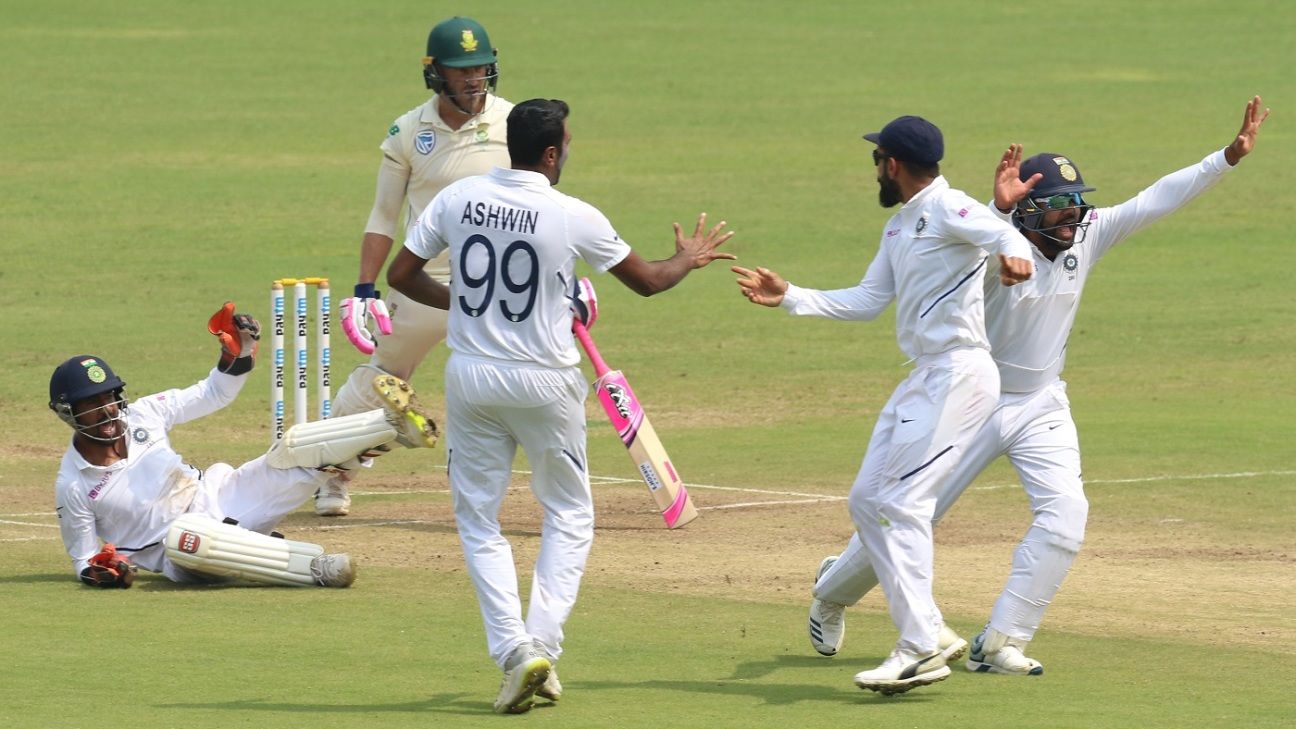 It was another comprehensive Test win for India, this time by an innings and 137 runs against South Africa in Pune, the result giving them an unbeatable 2-0 lead in the three-match series as well as a record 11th Test series win in a row at home. A satisfied Virat Kohli and a dejected Faf du Plessis spoke to Star Sports after the game. Here’s what they had to say:

I think it’s getting the responsibility of being captain. If you go out planning a double-hundred, you will not get it. But if you go out planning [on] playing five sessions for your team, invariably you cross that 200 mark as well. The mindset has always been to help the team as much as possible, play at the tempo the team requires you to, and in that process, big scores come. The mindset change is the only reason behind the big scores. Before that, I used to think from a personal point of view and put pressure on myself. But the moment you start thinking about the team, all the pressure goes away, and all you’re thinking is how to contribute to the team’s cause.

On his celebrations getting more muted with time

Everyone goes through a natural process of wanting to prove a point – to yourself, initially in your career – and then maybe you are not that mature to handle the things that happen on the outside. So sometimes you’re playing and you’re trying to prove people wrong, and those kinds of things come out. I think I am at a stage in my career where I’m just happy to be playing the way I am and contributing for my team. And, for me, crossing 150 or crossing 200 is not the most important thing. And that’s why those celebrations, I think… putting the team in a commanding position is the only goal and that’s the only thing I strive for. Not saying that I don’t enjoy scoring runs, I obviously enjoy scoring runs, but if they come in a winning cause, that’s the most important thing. I think it’s been a natural progress for me to have a more calm mindset over the years, because you feel more secure as a player, about where you stand in your own environment, and your own game as well. I have a good understanding of that and hence the muted celebrations.

You have to look forward to those sort of sessions. You have to look forward to playing against the new ball in the morning. I really enjoy batting with Jinks [Ajinkya Rahane], I think he has a great mindset, and we communicate really well. We both run well between the wickets and both of us have a solid game. So when we have a partnership, invariably we take the game forward, and that’s been the mantra of our success together. Whenever we have batted together in Test cricket – we’re probably the most successful Indian pair – and the only reason is both of us think for the team. We really enjoy coming up against world-class bowlers, and really contributing for the team in those situations, where it’s tough. We take a lot of pride in that. I think having him at the other end really keeps me focused as well, because he keeps giving me regular feedback if I’m doing something wrong. And vice versa for him as well.

On the things that have changed in the current team

The good thing is when we started out as a group, we were at No. 7, and the only way was up. We laid down a few things saying that if you want to take Indian cricket forward, these are the things expected of each one of us; work hard every day at practice, don’t come here and waste your time, contribute even at practice sessions, have a purposeful practice session and slowly those things will come into results. We are all lucky to have the group of players that we have, to be honest. In the last three-four years, the bunch of guys have been amazing, those 20 players have been playing in and out, and it’s just amazing to see that hunger and that passion to keep improving. Someone like [Wriddhiman] Saha, I would mention, especially coming back into this game, you could feel he was a little nervous coming back in Vizag, but this game he was back to his best, and knowing the way he can keep… [R] Ashwin as well, he stepped back beautifully. It’s guys contributing at the times when it’s needed the most, just willing to work hard on those 1 or 2% things, that has seen us get to the top and maintain that position.

On making it 11 home Test series wins in a row

It’s been nice, but looking at the larger picture, the Test Championship, every game has even more value. We’re not going to take the foot off the gas in the third Test, we’re looking for a result again, and hopefully make it 3-0. Because these points are important, we understand that, with the Test Championship it’s going to be very crucial, at all the stages, when we play away from home as well. And no one’s going to relax at any stage, that’s a guarantee.

Your first innings is really important, especially in the subcontinent. The runs that you put on the board, give yourself a chance. But the way India batted, especially Virat getting 250 [254*], that takes a lot of mental toughness, to put up a score like that in the first innings. Two days in the field can wear you down. And it was evident, especially that second evening, the batsmen were a bit weak in terms of the mindset after fielding for long time. Since then it was trying to play catch-up. And with a very good Indian bowling attack in these conditions, they don’t give you much. You have to be on top of your best game. If you are not, you are going to be found wanting and we were found wanting in this Test match.

On the plans against Kohli coming unstuck

As a captain, you try and think of ways how you can change field placements and bowlers, but he was too good in this Test match. All the questions we threw at him, he had answers for. Just relentless and sticking to his game. For me, what really stood out for me was the hunger for runs. You could see he was determined to score big and not get tired of and satisfied with getting a hundred and stopping. I think it was great value for us as batters, when you are at the top of your game, making sure you really hang in there, making sure you can put in big performances.

On fielding three pacers and leaving out a spinner

I think it was the right selection for this pitch, picking an extra seamer. But once again we showed that there are one or two of our bowlers, especially Vernon and KG (Rabada) – first and second Test – managed to get some pressure built but we need another bowler that can compete and keep the runs down and make sure we put some sort of pressure. When you look at the Indian attack, what they do well is they bowl well in pairs. You don’t feel at any stage that there is a let-off or easy couple of overs. It’s consistently up there. It will be unfair to expect a young fast bowler making his debut [Anrich Nortje] to come in and do everything perfectly right. It’s about learning and improving and getting another opportunity and being better the next time.

On the possibility of Lungi Ngidi playing the third Test

Ngidi is fine, he has been working hard on his fitness. So trying to get his workloads ready for this heat. Obviously, a big guy, just making sure he comes back for his second and third spells. His first spells have been very good. Just about making sure in this heat, you need a big tank so that you can bowl 18 to 24 overs a day. And as a big fast bowler that’s not always easy. It’s about getting his tank up and hopefully, if his tank is ready, we maybe put him in the mix in the last one. All in all, India are deserving Test series winners. They are very tough to beat at home, their record speaks for itself. We were not at our best. So we will try to make sure we can improve in the next Test.