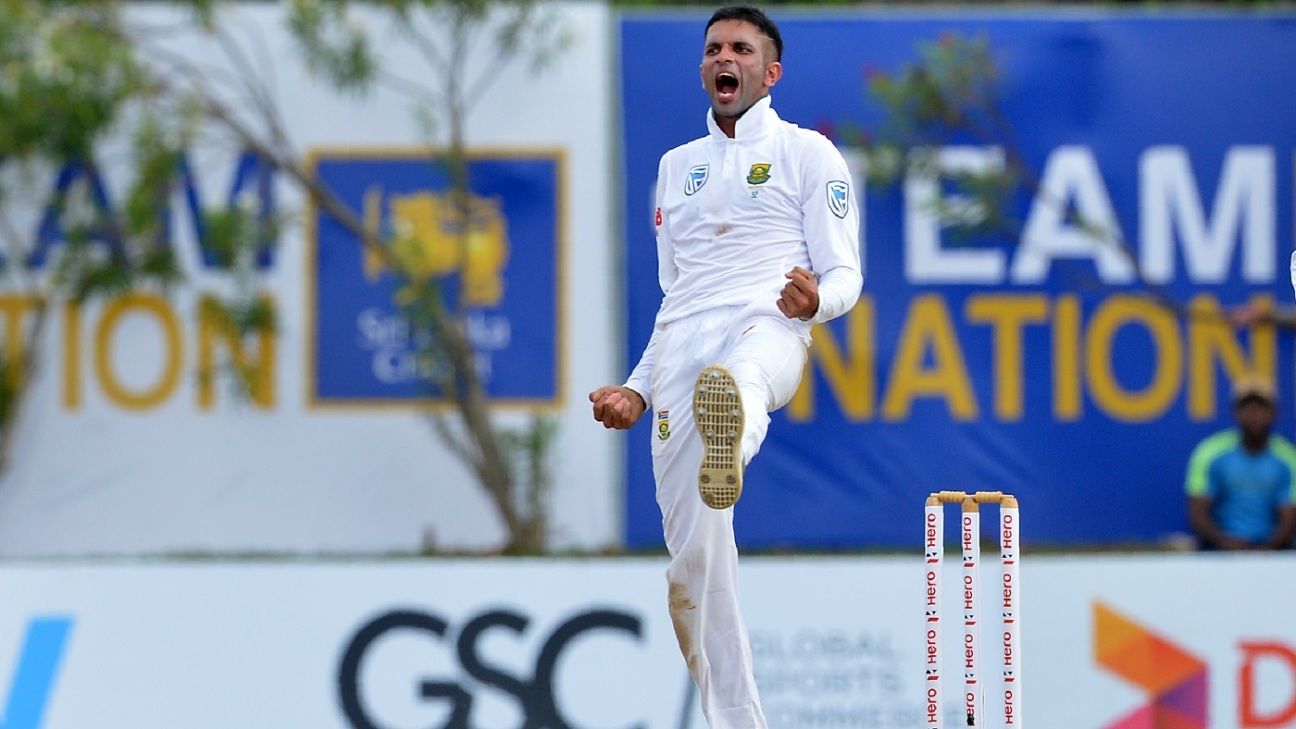 So said left-arm spinner Keshav Maharaj, who knows better than most that these two teams have been trading whitewashes over the past few years. The last time Sri Lanka were in the country, in 2016-17, Maharaj had been part of the South Africa team that had walloped the opposition 3-0. With South Africa having also thumped Pakistan 3-0 in December and January, Maharaj feels they are well-placed to “dominate” another South Asian opposition.

“Whichever team comes here we’re pretty much going to try dominate them,” he said, two days out from the first Test in Durban. “Especially Sri Lanka, who were really dominant against us in Sri Lanka. Now they are in our conditions and hopefully we can put in a dominant display in the two Tests.

“Every series you play you want to be dominant and whitewash the opposition – for want of a better word. Playing here this should be our fortress. When people come here they should be on the back foot when they do take the field. But we’re taking nothing for granted, whoever our opponents are.”

The only issue for South Africa, is that they tend not to win at the venue they have brought Sri Lanka to first. They’ve lost six, and won only one of the last seven result Tests at Kingsmead, over the last 11 years. One of those losses had in fact been to Sri Lanka in 2011 – the only time Sri Lanka won a Test in the country.

In fact, in hosting these two Tests in Durban and Port Elizabeth, Sri Lanka will have the benefit of playing on arguably the two most spin-friendly pitches in the country.

“At Kingsmead it’s not your swing and fast bowling wicket that we were used to 10 or 15 years ago,” Maharaj said. “The wicket will wear down and slow down significantly I would say. I think it’s just a patience game at Kingsmead now. It’s a little bit slower than expected. But with the sun about, it may make the wicket harden up and get a little bit quicker than what we’re used to as well.”

Sri Lanka, though, are in poor shape to take advantage of the relatively friendly conditions at Kingsmead. They have just jettisoned their regular Test captain Dinesh Chandimal, who was found by the selectors to be out of form. They are also missing four of their best fast bowlers, while Suranga Lakmal is himself racing to recover from a back injury, in order to play the first Test.

With all this in mind, perhaps the time is right for South Africa to claim a rare win at their least-favourite home venue. Maharaj, at least, was upbeat about his team’s chances at a venue in which they have not won since 2013.

“Things do change, and the mindset changes. This Test unit is a different team from what we were on previous occasions playing at Kingsmead. I am confident we can get over the line and change the mindset that’s from the public, and from the players.”