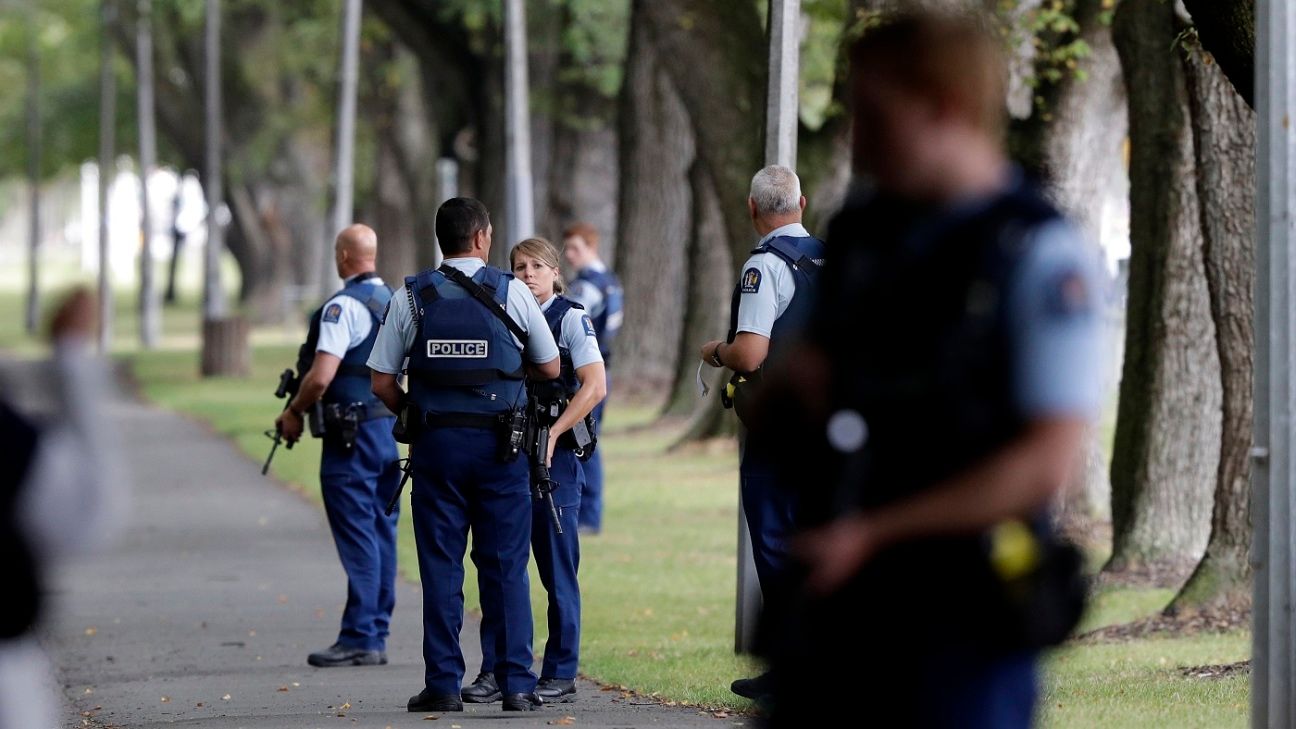 Members of the Bangladesh team were just “about 50 yards from the mosque”, which was the site of one of two terror attacks in Christchurch on Friday morning that resulted in multiple fatalities, Khaled Mashud, the team manager, told reporters at the team hotel. The third and final Test match of the series was cancelled following the incidents.

“This was a kind of accident that we would never expect nor want in any part of the world,” Mashud said. “We are very lucky because we had a number of us, about 17 of us, in the bus. Soumya Sarkar was also there, and we were all heading to the mosque for prayers. Only two of the players [Liton Das and Nayeem Hasan, as well as Sunil Joshi, the spin-bowling coach] had stayed back in the hotel, and rest of the squad had gone there. We were very close to the mosque, and we could see from the bus. We must have been about 50 yards from the mosque.

“I would say we were really lucky. Had we reached even three or four minutes earlier, we probably would have been inside the mosque. This could then have been a massive incident. We are very thankful that we weren’t caught in the crossfire, but what we saw was straight out of a movie scene. We could see bloodstained people staggering out of the mosque. Maybe in about eight-ten minutes, we were all inside the bus and were sitting with our heads bowed, just in case someone fires at us.”

“We are very thankful that we weren’t caught in the crossfire, but what we saw were straight out of a movie scene. We could see bloodstained people staggering out of the mosque”

The team was initially barred from leaving the bus, but after a while, they disembarked and ran through Hagley Park to the ground. They later went back to the team hotel.

“When we realised that the shooters could have inflicted more damage if they had found us inside the bus all at once, we took a collective decision to escape through the back gate,” Mashud said. “We ran or quickly walked out through that gate. Then we were in the dressing room, and the local liaison people explained to us how we could get out of there most safely to our hotel. It wasn’t their fault, they tried their best according to whatever they are used to in their culture. Our players supported them a lot, with inputs on what was needed at that point of time. Our decision to get out was timely, because in videos we saw that people came out and kept shooting later.

“All said and done, I think we are grateful that the team is all healthy and in the hotel. Those back in Bangladesh must be worried about our well-being. I think the players are okay, and the Test has been cancelled. They have told us and will send an official mail by 6:30 in the evening. Our plan to return has also been chalked out with the people in charge of logistics.

“The board has been in communication with us, not just with me, but also the captain Mahmudullah and Tamim [Iqbal] and coach [Steve Rhodes]. I would like to thank the cricket board for monitoring the situation and giving us their inputs. I hope everything will be fine, and I would like to thank the New Zealand cricket board, for how they have carefully brought us to the hotel. This incident has nothing to do with cricket, and it is unfortunate both as a cricketer and a human being to have witnessed this. We want to play cricket, and it is unfortunate that this accident is causing us to pull out of a Test match.”

The players and others, understandably, are shaken by the experience, as some of their earlier tweets showed.

Entire team got saved from active shooters!!! Frightening experience and please keep us in your prayers #christchurchMosqueAttack

Alhamdulillah Allah save us today while shooting in Christchurch in the mosque…we r extremely lucky…never want to see this things happen again….pray for us

“It is natural to be affected. When you see something like a terror attack in front of you, and you see blood spilled in front of you, this will affect any human being,” Mashud said. “It wouldn’t have occurred to us then that we would be safe later. Some of the boys inside the bus were crying as well, because they were all worried about how to get out of there.

“At this point, it is important not to leave the hotel, because an incident like this can happen anywhere. We don’t want we carry any memories of this incident. We have briefed everybody to have dinner at the hotel itself today onwards. All the players are together in one room, and trying our best to distract ourselves by talking about other things. Ultimately, everybody ends up talking about what they saw, but we are lucky that if the players had either gotten off the bus later or gone to the mosque earlier, it would have been difficult to get out of there. When we were able to get out of there, it was because of the collective effort of the players. I would thank the players for caring for themselves so well.”

A decision on when the team will return to Bangladesh – or to the other parts of the world where members of the support staff are from – has not yet been taken.