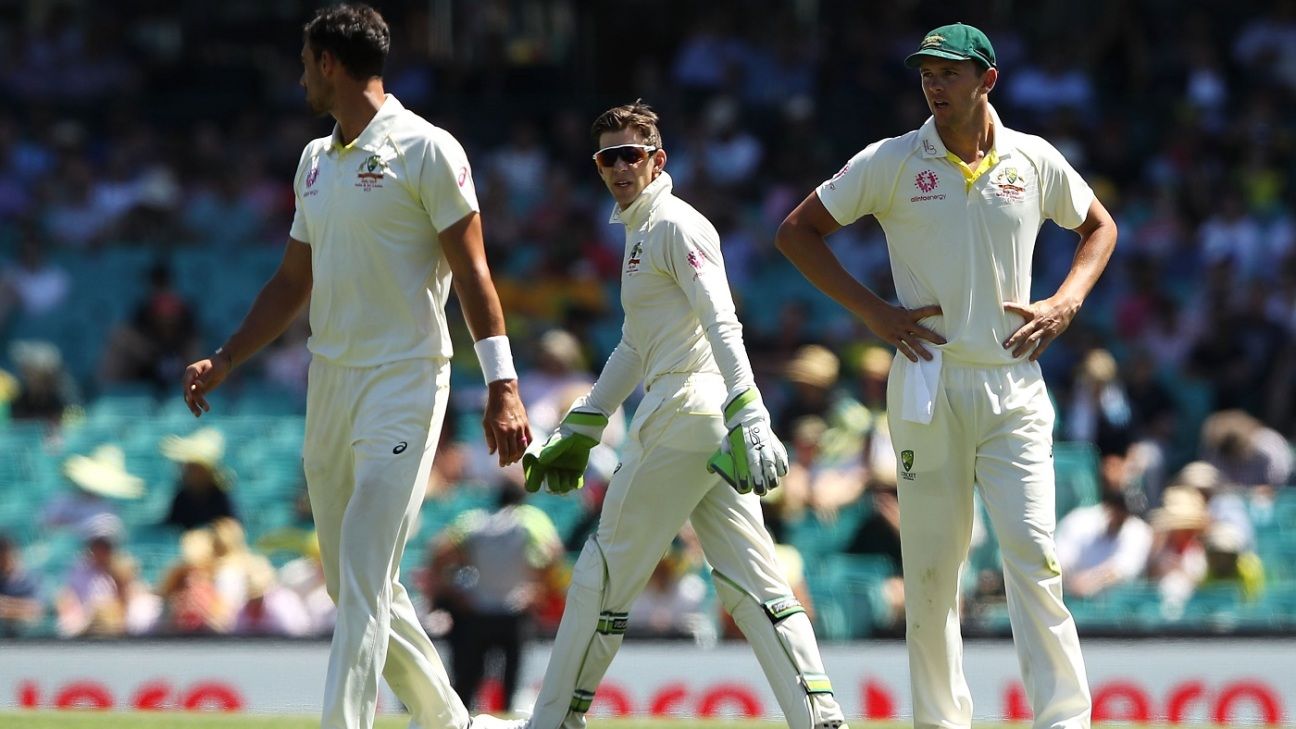 Tim Paine has denied a major difference of opinion with his bowlers over the tactics employed at the SCG, as he tried to put on a brave face after Australia had been taken for over 600. He did concede, however, that the huge workloads on his bowling attack had left them unable to repel India’s charge over 600.

Paine insisted there had been no falling-out in the camp following interviews by Nathan Lyon – who told ABC Radio he “wasn’t happy” with the short-ball plan used in the first session of the match – and bowling coach David Saker after the first day’s play, which suggested tensions emerged as they watched their chance of levelling the series slip away.

“I think the bowlers wanted one thing, Tim wanted one thing,” Saker told ABC Grandstand. “That’s not been the case as the general rule but when you were watching from the sideline you could see there was some confusion.

“Last night we talked quite heavily about the day, more because we thought it was a really disappointing day and we just wanted to get our point across,” Saker added. “Some of it was quite aggressive and that’s not like me usually. I was quite animated, and I know I was not the only one. JL [Langer] wasn’t happy. The bowlers know that.”

“We always have discussion post game but in terms of being on a different page, no, I think we’re pretty clear on what we’re trying to do,” Paine responded. “Yesterday afternoon – and to be fair probably the first hour in the morning then the first hour after lunch – we got it slightly wrong. Sometimes you don’t quite execute and teams can get away from you and that’s what happened.”

Australia’s last chance came and went when Paine reviewed for a caught behind against Rishabh Pant when he was on 8 – and India were 5 for 345 – but there was a flat line on Snicko. Australia did manage to extract Cheteshwar Pujara for 193, only to then chase leather as Pant and Ravindra Jadeja added 204 in 37.2 overs in a statement of authority and control.

“Rishabh I’m pretty sure nicked one and it would have been 6 for 330 and it’s a different ball game,” Paine said. “They are just little things that make a huge difference and with cricket it’s the small things that add up. We have to stick together, you have days in Tests that don’t go your way and are difficult, the easy thing to do is to throw in the towel but we won’t be doing that. We’ll fight as hard as we can for the next three days.”

Having spent more than 205 overs in the field in Melbourne and 167.2 in this innings in Sydney – with just three days between the matches – there were some dispirited and weary bowlers who were thrown the third new ball during the final session of the second day. It was to Josh Hazlewood’s credit that he kept running in, and could have had Jadeja lbw, but Mitchell Starc’s one over was all over the place and Pat Cummins was flogged for 16 by the batsman.

“It’s not so much the number of Tests but the number of balls that this Indian batting line-up has made us bowl. That takes its toll,” Paine said. “We spoke about that right back in Adelaide, that’s something we wanted to do to their attack. We haven’t quite been able to do it and they’ve done it to ours. At the end of a long series, you can get some real rewards if you can make teams bowl lots and lots of overs. I think that’s what you saw late today. You have to tip your cap to India, they’ve worked extremely hard for three-and-a-half tests to get us where they got us today.”

It is no secret that the Australians are disappointed at the two pitches which have been served up for them in Melbourne and Sydney. The lack of pace and bounce – although Sydney has had more of both than Melbourne – allied to the ongoing inability to find much swing with new or old ball has left the attack looking helpless at times, but Paine acknowledged it was a skills failing and not just the surface in front of them.

“The pitch here and the pitch in Melbourne didn’t make us bowl as badly as we probably we have in this Test. We’ve just been outplayed,” he said. “Both teams have had similar conditions. But from me, who also loves watching Test cricket, I’m sure guys would like to see a bit more pace and bounce in Australia, something we’ve probably become accustomed to in Australia but it is what it is. We’ve just got to play better on whatever wickets are served up, wherever we are in the world.”