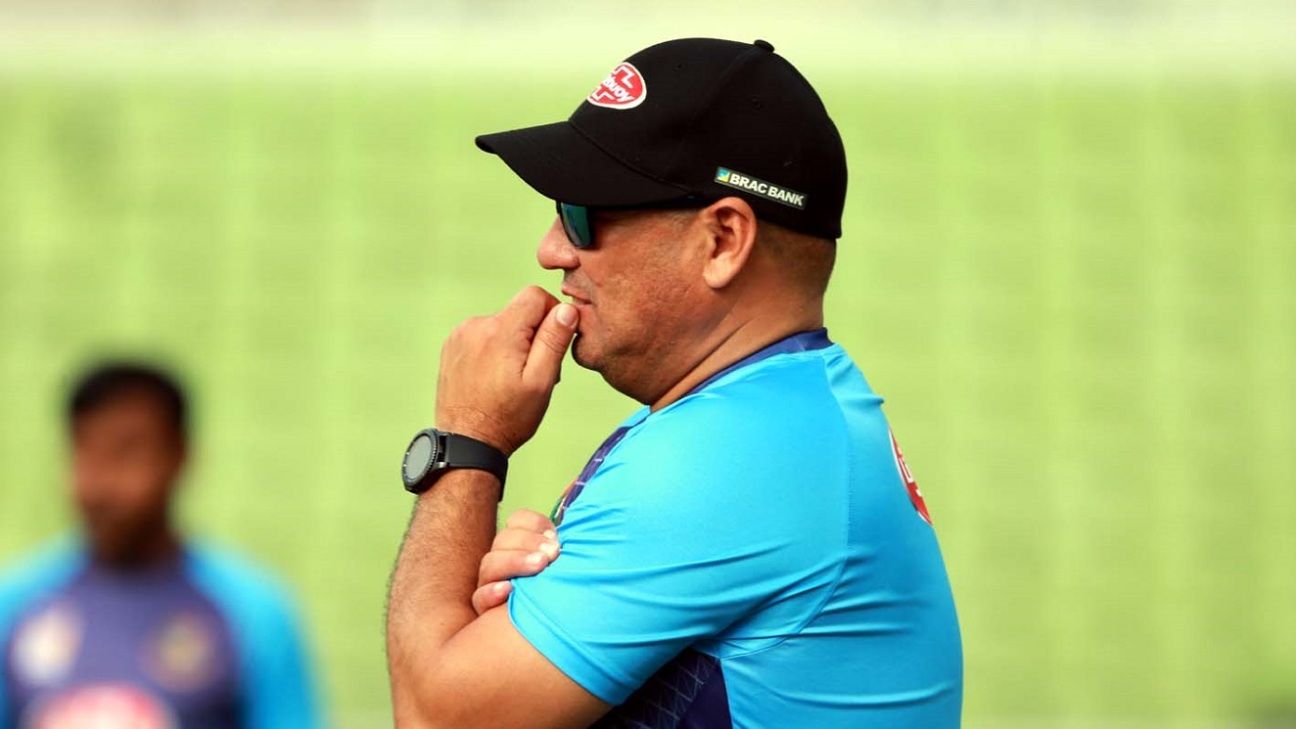 Bangladesh coach Russell Domingo has called for structural changes in the Test side for overall improvement. He pointed towards the need for a seam-bowling allrounder who would bat at No 7 or 8, to provide the balance that the current side lacks.

Bangladesh are playing seven batsmen, including wicketkeeper Liton Das, and four bowlers in the first Test against India. Mehidy Hasan Miraz hasn’t lived up to the promise that he could develop into an allrounder, which has left Bangladesh with a long tail. The squad outside the playing XI consists of three specialist bowlers and an opening batsman, so Domingo will have to wait for that elusive allrounder to emerge.

“There’s no doubt that the structure of the team needs change, otherwise the results are going to be the same,” Domingo said. “I need to sit with the selectors to plan the way forward. I need to identify the players that can take the team forward. If it means that we need to go with some new faces and struggle for a period of time, I don’t think it is any different to what is happening at the moment.

“There’s some fantastic players in our side that needs to be respected. We need to value their performances for Bangladesh, but we also need to take decision in the best interest of the team.”

The missing link here is, of course, Shakib Al Hasan, who gave the team the flexibility to play five bowlers. The team management, however, has often been reluctant to play that fifth bowler, and have often played an eighth batsman even when Shakib has been in the side.

Domingo said Bangladesh will need to find a seaming allrounder like Mohammad Saifuddin, who has done a decent job in the ODI and T20I sides, but often struggles with injury.

“It is very hard to play with two seamers,” Domingo said. “We definitely need to find a third seamer who can bat. There’s Saifuddin, but he is struggling with injuries. But the structure of the team needs attention.

“I think a lot of teams that play against Bangladesh will prepare good wickets, which won’t spin much. We need to find a seamer who can do a No 7 or 8 job for us with the bat.”

Domingo said Bangladesh tend to pick the extra batsman because not many of the top seven have good Test averages, and this forces the team to sacrifice a bowler. “I think it is easy to say when you have six batters who are all averaging 45 or 50. You look at the numbers of the Indian batters, but unfortunately we don’t have those numbers in our batting line-up.

“We are playing that extra batter to make up for that. It is a catch-22 situation. If you don’t pick up wickets, people say why you didn’t take the extra bowler. Hindsight is a great sight.”

What Domingo is also worried about is the level of interest his players show in Test cricket as opposed to T20 cricket.

“It is a challenge which I need to come to terms to, as a coach.” Domingo said. “It is obviously a tough one, being my second Test match and seeing how guys approach Tests, how they train leading into Test cricket. It is hard for me to say whether guys prefer [Test cricket or the shorter formats], that you need to ask them.

“I think trying to siphon out the T20 into one side and Test-match guys into one side is something that I am grappling with. After this last T20 series and the first days of the Test, I am starting to get an understanding.”