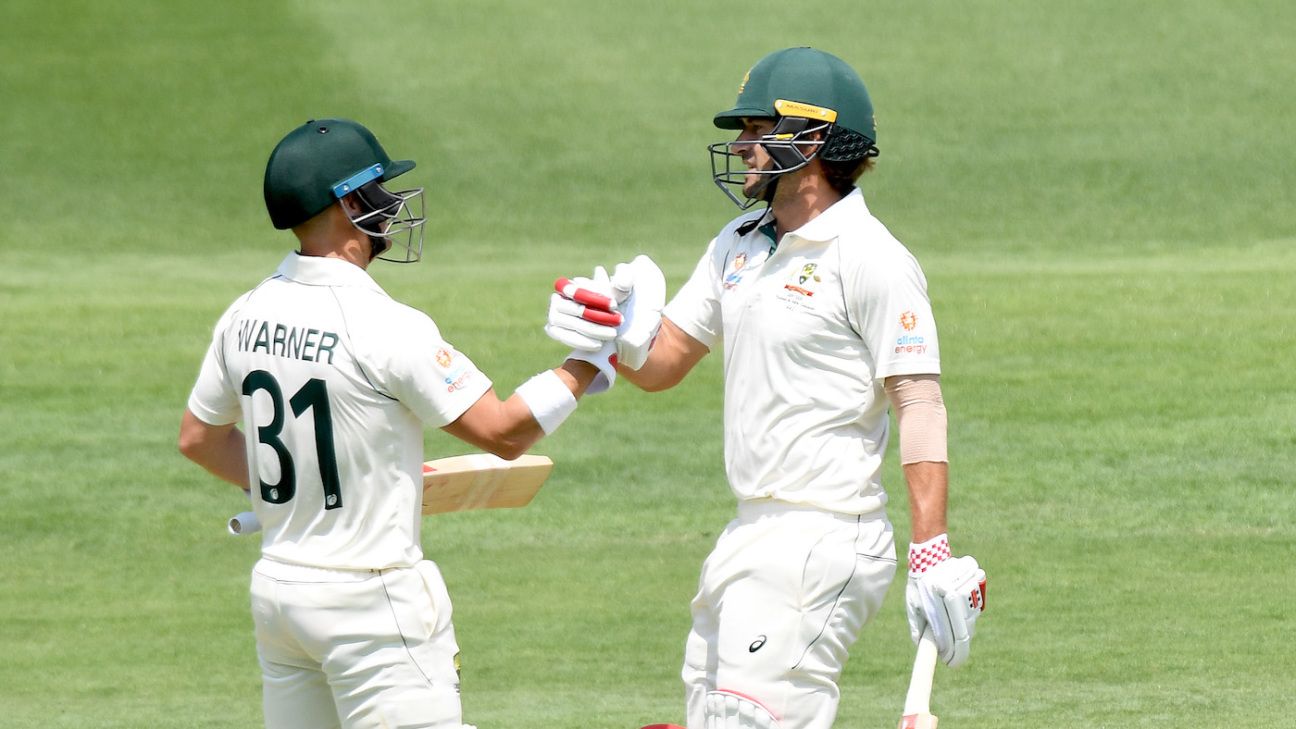 David Warner and Joe Burns believe their commanding 222 opening stand against Pakistan at the Gabba will be the resumption of a beautiful friendship, after a previously promising union was effectively broken up by the wiles of Sri Lanka’s spinners as far back as 2016.

Always comfortable in each other’s batting company, Warner and Burns were strong partners in 2015-16, including another major stand against New Zealand in Brisbane, before they were split up and left with plenty of challenges, culminating in Burns’ extended time out of the team and Warner’s ban in 2018. They were almost reunited for this year’s Ashes series, but the belated union at the Gabba instantly showed why they had so enjoyed providing starts for Australia in the past.

Warner was hopeful that this time around he and Burns would be given an extended run as partners, both for this home summer and the challenges beyond it.

“Yes is the answer. I reckon I threw the toys out of the cot a lot there as well, that was a challenging series for a lot of us,” Warner said of Sri Lanka in 2016 when Burns was dropped. “But look the success we’ve had together, especially here at home has been fantastic, and as Joe said before, we just have this energy about us when we’re out there, we communicate a lot, we’re always talking about cricket, even though we probably wouldn’t want to talk about it but we do.

“But the most important thing is rotating strike. When we do that well, it’s hard for bowlers to put it on the spot all the time when you’re doing that. I know I try to achieve that when we’re out there, if I can’t get the ball away or it’s got to be respected, I try and tuck it in on the leg side or we drop and run. A lot of the fielders hang [back] a little bit, especially when I’m on strike, so I’m always looking around for that drop and run, and I know he looks to get off strike as well. Knowing each other’s roles when we’re out there, we do that very well. We did it the other day in the nets, we had a good half-hour session where we said we’re going to run if we think there’s a run and rotate it six balls.”

For his part, Burns stated that the combination of a left-hand batsman and a right-hand batsman was always useful, in addition to a good feel for each other’s batting tendencies. “I think the left-hand, right-hand certainly helps, and I’ve always said batting with Dave is really easy,” Burns said. “You get down the non-striker’s end, you look up and the scoreboards’ ticking along, there’s no pressure to score. I think the biggest thing for me is just the engagement we have, we’re always talking about how the bowlers are trying to bowl, where we can score, where the threats are.

“When you have a combination like that with your partner, you lean on your partner during the tough times, and as the innings develops there’ll be scoring opportunities for each of us. I think we saw that today, the Gabba can be a great place to bat once you get in, and if the bowlers are missing their areas, and left-hand, right-hand certainly helps with that.

“The way we prepare as well, having someone who’s been there and done it, someone to talk to about how they’re going to go about their preparation and walking out into battle with them makes it a lot easier. You’d be silly not to lean on guys in our team who have the experience and success that guys like Davey has had.”

Reflecting on his time out of the team, Warner noted how it had given the likes of Burns, Travis Head and Marnus Labuschagne the start to gain a foothold in the team, while also granting him a physical and mental break from the treadmill of international cricket.

“It was obviously fantastic [to be back] – on the other hand it was a great opportunity for other guys to step up and show what depth Australian cricket has and I was chuffed for this guy next to me to get some runs and play the way he did,” Warner said of Burns. “He was unlucky not to get selected in the Ashes touring group, but to come out here and put that on the board and have that time off to reflect, and just get away from the game.

“There’s a lot more to life than just cricket and I really loved the time I spent at home with my family. You don’t get that when we’re travelling all the time. You come home, sometimes you’re not in form and you can throw the toys out of the cot and that can hinder your relationships. But for me it was a level grounding and I really enjoyed that time off. Obviously I’m back now and I’ve got to keep working hard and keep being respectable of the game, because it can bite you in the backside very fast.”

Burns, too, had faced time away from the national team, and had won respect from several key observers by responding to his omission from the Ashes squad by taking a European holiday and returning fresh and ready for the home season. His northern summer and a contract with Lancashire had been broken up by a case of post-viral fatigue.

“I don’t think you really have much choice,” he said of not sulking over his non-selection. “Selections come and go in this game, there’s so many games you play these days that you’ve just got to make sure you’re making runs. There’s always a training session around the corner, always a game to play around the corner. I came home, got stuck into pre-season with the Queensland boys and wanted to hit the ground running with three Shield games at the Gabba, which I knew was going to be tough work and just wanted to be batting well.

“I knew if I was batting well there’d be opportunities there. It was great to watch the boys on TV playing in the Ashes, obviously you get left out and of course you want to be there trying to help out in any way you can, but I knew my job was to make sure if I was called upon in the home summer that I was ready to go. Tried to use that as my motivation and get stuck into it.

“It’s a very bitter feeling getting bowled around your legs on 97 by a legspinner at the Gabba. But I was really satisfied with how I batted, felt like I did a lot of things right and I know if I bat more often than not, hopefully it equates to plenty more runs. I’ll just try to be better in the 90s next time and go and bat all day and come out tomorrow and do it all again. Look at Davey, he finished 150 not out, those are the sorts of innings that win Test matches.”