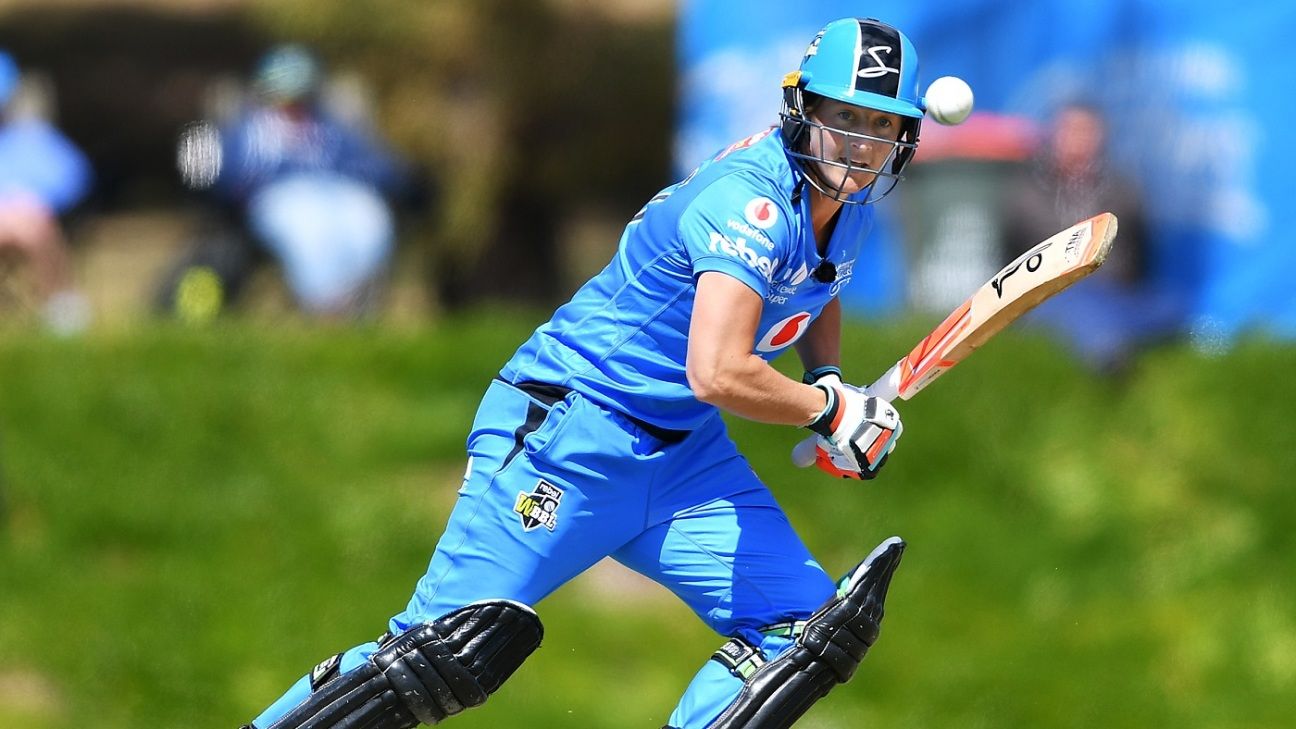 Sophie Devine‘s unbeaten 56-ball 85, featuring five sixes in the 20th over of the Adelaide Strikers,/b> innings, helped set up their 17-run win over Melbourne Stars at the Karen Rolton Oval.

The 31-run last over, bowled by legspinner Madeline Penna, took Strikers to 164 for 4 after Devine – who became only the second player to achieve the WBBL career double of 1000 runs and 50 wickets – and compatriot Suzie Bates added 54 runs for the opening wicket.

Devine’s onslaught not only spoiled Penna’s figures – until then, she had conceded only 19 in three overs – but also ensured Stars were set a target that would warrant substantial contributions from their batters. However, save for a 41-ball 52 and 51-ball 70 from the South African pair of Lizelle Lee and Mignon du Preez respectively, no Stars batter was able to get into double-digits.

After Devine struck second ball of her opening spell, removing captain Ellyse Vilani for 1 in the second over, Lee and du Preez put on 112 runs for the second wicket. But Lee’s dismissal by Bates in the final ball of the 15th over triggered a collapse, during which the visitors lost seven wickets for 32 runs. Devine and Bates took two wickets apiece, while Amanda-Jade Wellington returned 3 for 31 to help Strikers climb to the top of the table as Stars remained stuck at the bottom.

Melbourne Renegades completed a double against Hobart Hurricanes at Junction Oval, a day after Renegades captain Jess Duffin had guided them to a win in a last-ball thriller against the same opponents.

Renegades’ victory on Sunday, though, was starkly different: they beat Hurricanes by eight wickets with 26 balls to spare, thanks to a 62-run second-wicket stand between Tammy Beaumont and Danni Wyatt in a 109-run chase.

Wyatt struck the winning single in the 16th over to complete an unbeaten 44-ball 54, in the company of Duffin, who finished on 6. Medium-pacer Belinda Vakarewa, who returned figures of 2 for 16 from her four overs, was the only Hurricanes bowler to be among the wickets, removing opener Sophie Molineux and then Beaumont for a 32-ball 37.

With the bat, too, Hurricanes showed little spark. After being sent in, they lost their openers inside the first two overs, and only Heather Knight reached the 20-run mark. Five other batters got into double figures, but failed to convert them into substantial scores as Player of the Match Molly Strano returned her season best 3 for 19, ably supported by Molineux and Maitlan Brown, who gave away 24 and 19 runs respectively for two wickets apiece.

Perth Scorchers, too, accomplished their second straight victory after Sydney Thunder fell short of a 152 chase by seven runs at the Karen Rolton Oval.

That, despite losing the toss, Scorchers were able to post 151 for 5 was down, in part, to batters Georgia Redmayne, Natalie Sciver and Heather Graham, all of whom made 30-plus scores. The trio’s contribution came in the wake of openers Amy Jones and Meg Lanning falling to the fast-bowling tandem of Shabnim Ismail and Rene Farrell inside the powerplay.

Solid contributions from the top four, including a 20-ball 30 from opener Naomi Stalenberg and a 27-ball 29 from No. 4 Alex Blackwell, meant Thunder needed 51 off 32. However, after Blackwell was dismissed by Kim Garth, Player of the Match Graham took the next threeThunder wickets in only eight balls across two overs, the slide leaving No. 3 batter Tahlia Wilson stranded on an unbeaten 39-ball 47, Scorchers clinching the game by seven runs.