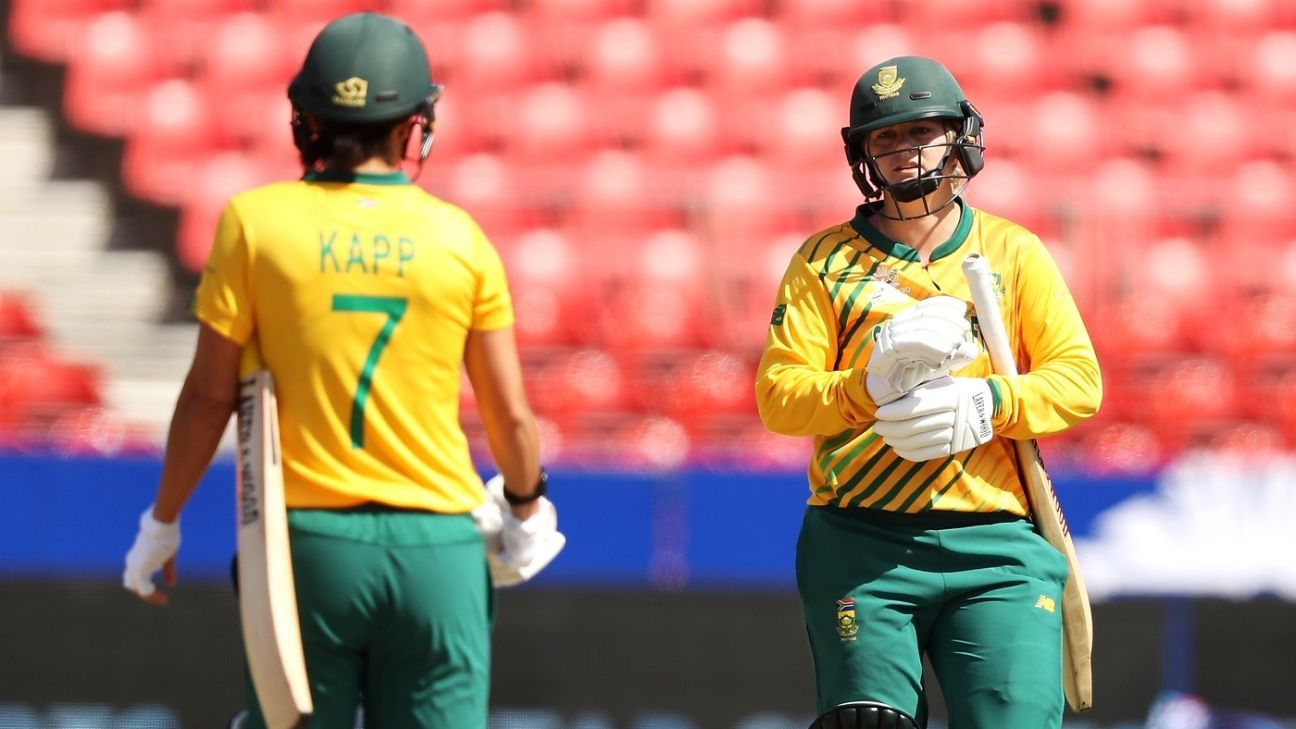 It’s difficult enough having to decide if you will risk fielding your team’s premier allrounder in a World Cup semi-final after they the player has taken ill, but that decision was made even tougher for South Africa captain Dané van Niekerk because that player is also her wife. Marizanne Kapp, the fast-bowling allrounder who married van Niekerk in 2018, suffered a viral infection during the recent T20 World Cup in Australia, which ultimately kept her out of the rain-reduced, crunch knockout game.

“I was very conflicted. It was a very difficult decision,” van Niekerk said during a joint press conference with Kapp during South Africa’s nationwide lockdown. “I was sitting with [coach] Hilton Moreeng, and we had a lot of time [to decide] because of the weather. He is a family guy and I said to him it was difficult for me to know [what to do].

“But the way she looked, it would have been wrong for us to push her to play a game. Yes, it was a semi-final and it was very important but with a team like ours, I am sure we will get into more semi-finals and she will get her shot to play in another semi-final. Having said that Nadine de Klerk did very well. I couldn’t have asked for more.”

De Klerk took 3 for 19 as South Africa kept Australia to 134 for 5 in their 20 overs and DLS calculations left them with a target of 98 in 13 overs. They fell short by five runs and missed out on a first major tournament final but for van Niekerk and Kapp, there was more at stake.

Kapp first felt fatigued before South Africa’s group-stage match against Pakistan but decided to ignore the symptoms. “I made the choice to play the game against Pakistan where I wasn’t 100%,” she said. “But that day it happened to be 30 degrees or higher, so I think that just put my body into shock and I didn’t recover after that.”

She scored 31 off 32 balls in that match, batting at No.3, to help South Africa recover from 17 for 2 to 136 for 6, but was unable to bowl. South Africa, however, defended the total to guarantee a place in the semi-finals, which allowed Kapp to skip the final league-stage match against West Indies to give herself time to recover for the semi-final. But she didn’t, and she still isn’t quite sure why. “We did a lot of tests in Australia and when we got home and I am sick and tired of giving blood but we couldn’t find anything,” Kapp said. “I was still quite sick when I got home and was off for another two or three weeks.”

Kapp has since recovered but recognised this as part of an ongoing problem (she also sat out matches on South Africa’s tour to New Zealand) which may have something to do with her nutrition. “I am a vegetarian, so I don’t always eat as well as I should,” she said, touching on a topic that will be further highlighted in a feature for The Cricket Monthly next month. “Sometimes if I have a really tough game or training session, I seem to get sick the next day.”

That cycle of optimal fitness and severe slumps is tricky for Kapp to manage, especially because she can’t get enough of being on the field. She described herself as being “quite annoyed” with the current stay-at-home exercise enforced by the global coronavirus pandemic, which saw South Africa’s home series against Australia postponed and threatens to do the same to their away tours to West Indies and England. But on the positive side, it’s allowing Kapp some time to discover there is more to life beyond the game.

“Even though I didn’t want this break, it’s a good break for me,” Kapp said. “I love watching cricket and talking about cricket but Dané is the one that has tried to teach me that cricket isn’t everything. Because to me, cricket is everything.”

Kapp and van Niekerk have occupied themselves with keeping fit and projects around the house, though Kapp has yet to explore the kitchen. “I wish I could say that Marizanne has started cooking but that hasn’t happened,” van Niekerk said. “I’ve become a bit of a DIY person and I’ve been plastering walls and things like that. And we’ve got some gym equipment downstairs.”

Both of them are still eyeing being able to play for the Oval Invincibles in The Hundred and the WBBL, where they represent the Sydney Sixers, but understand that those tournaments may not take place. If that is the case, their focus will shift to preparing for next year’s ODI World Cup in New Zealand where van Niekerk will captain South Africa to a fourth world tournament. Naturally, she will hope for a fully-fit Kapp to be available but has promised no special favours.

“She says I am tougher on her than anyone else in the team. I think we are just trying to set the precedent that when we are around the team and we are training and playing, it’s strictly a professional relationship and anything personal stays off the field,” van Niekerk said. “Obviously, we’ve had our fights on the field but I am a bit more tough on her because I just want to show the team that there is no favouritism. We are there to do a job and we need to be professional.”

But there’s also the human element and both van Niekerk and Kapp acknowledged that having the same profession has an obvious advantage. “When you see how your team-mates miss their partners on a tour, you realise that we are always lucky enough to have each other there, especially when it’s not going well,” Kapp said.