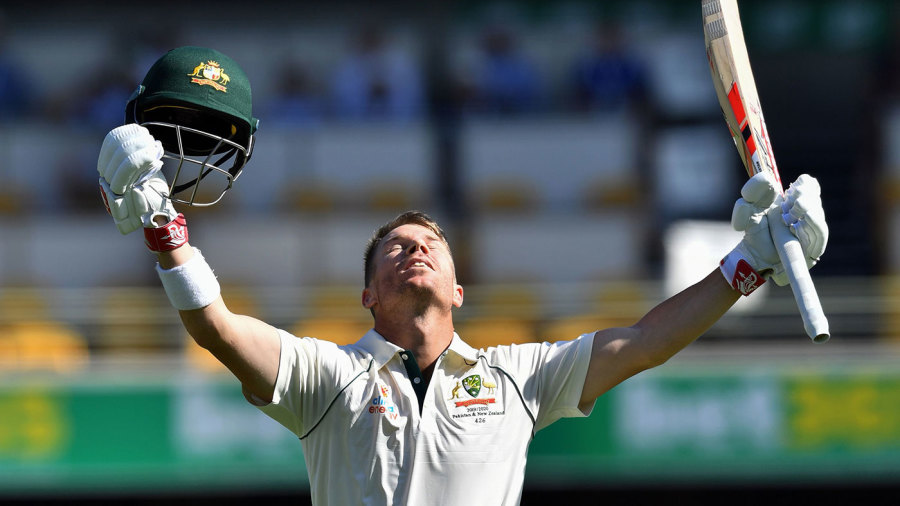 David Warner managed to eclipse his meager Ashes tally in less than two sessions of batting on the way to a cathartic 22nd Test hundred, putting on an opening stand of 222 with the recalled Joe Burns, as Australia enjoyed a dominant day at the Gabba to move into a position from where it’s difficult to see how Pakistan can come back.

Warner and Burns, who fell three runs short of his fifth Test century, were not separated until the final session although debutant Naseem Shah was denied his maiden international wicket shortly after lunch when he overstepped having had Warner caught behind on 56.

He made the most of his reprieve, reaching his first Test hundred since the 2017 Melbourne Test against England off 180 balls. After a sedate single, he brought out the trademark leap and there was clear emotion as he was congratulated by Burns. It was his fourth hundred at the Gabba – where he also scored a Sheffield Shield century earlier this season – and took his average at the venue over 70.

Warner closed unbeaten on 151 albeit with another stroke of fortune when the ball grazed off stump but the bail did not dislodge as he shouldered arms at Imran Khan in the penultimate over. Alongside was Marnus Labuschagne who eased to 55 in a stand of 90 with the lead already at 72 and the prospect of them batting long enough to take the final innings largely out of equation. For the members of the Pakistan attack who were on the previous tour – Khan and Yasir Shah – it would have been a familiar feeling.

From the start, Australia set a positive tempo although Burns wasn’t far from falling to his first delivery when he under-edged Khan but the ball did not carry to Mohammad Rizwan. There was a hint of nervousness from the opening pair for a few moments, but Burns’ first boundary was a strong square cut and in the sixth over Warner leaned into a thumping cover drive.

Naseem was handed the ball in the seventh over, immediately pushing the speedgun into the high 140s, and in his fourth over registered the fastest ball of the match. There was plenty to get excited about with the smooth action and impressive pace although already a no-ball would come back to haunt him. He returned for a second burst before lunch and struck Burns a painful blow on the elbow with the penultimate ball of the session.

One of the curious tactics from Azhar Ali was the use of Iftikhar Ahmed’s part-time offspin ahead of Yasir and the warning signs were flashing for Pakistan as Australia went to lunch on 0 for 100.

However, two overs after the break they should have had a huge lift. Warner drove a full delivery from Naseem, got an under edge and the celebrations started as Rizwan took the catch. A moment to savour for the 16-year-old. Then the third umpire was called in to check the no-ball and the image was painful: Naseem’s foot comfortably over the line, no room for any doubt as with Pat Cummins on the opening day.

There were consoling pats on the back from team-mates and the incident, while ultimately the bowlers’ fault, brought into the spotlight again the lack of on-field calls for overstepping. At tea, Channel 7 showed there had been 21 missed no-balls in the first two sessions.

Pakistan created precious few other chances during the afternoon as Burns joined Warner with a half-century in a rekindling of a productive opening partnership. Both players used their feet nicely to the spinners and the closest they came to being separated was Warner surviving a run out by a frame when Yasir hit direct completing a second on 93.

Warner had to take tea on 99 having tried to turn a single into a two on the last ball of the session and Pakistan strung together nine dots before the run to bring up three figures.

The opening stand reached 200 – this had been the previous opening pair to reach that mark for Australia, against New Zealand, also at the Gabba, in 2015 – and attention turned to Burns as he approached three figures, his absence from the Ashes looking even stranger.

He was within touching distance of centuries in back-to-back Test appearances, following his 180 against Sri Lanka in Canberra, when he missed a sweep at Yasir and was bowled round his legs. He could barely drag himself from the crease, but there would need to be an extraordinary turn of events for him not to have the whole summer to try, finally, to cement that opening role.

It has been a while since Australia’s No. 3 has come in with a ball 60 overs old against a tired attack and though Naseem was brought back to Labuschagne there was not quite the life of earlier. At the end of his first day with the ball, Naseem was elevated to take the second new ball but there was no late success to lift him or Pakistan. There will need to be plenty in the morning, although this already feels like a game that has gone. Steven Smith is still to come.