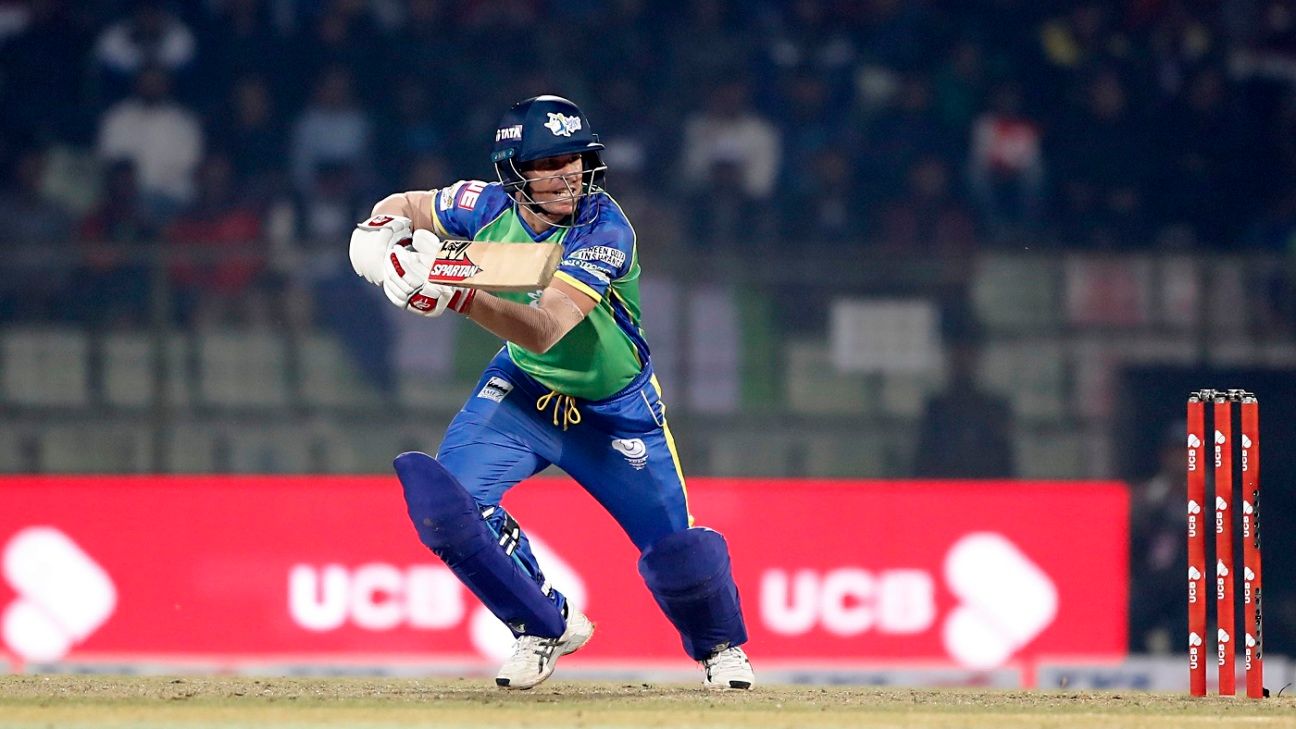 Desperate to dig his side out of the BPL cellar, Sylhet Sixers captain David Warner showed he was willing to resort to any means necessary to get his side a victory. Just 24 hours after he was bowled for a duck in match where the Sixers subsided for 68, Warner pulled out all the stops. That included switching stances to bat right-handed to successfully swat Chris Gayle for a six and two fours during a half-century in his side’s 187 for 5 on the way to their second win of BPL 2019.

Rilee Rossouw gave the Sixers a scare with a belligerent half-century in reply, but Rangpur Riders eventually ran out of steam once the tournament’s leading scorer fell in the 12th over. Mehedi Hasan Rana and Taskin Ahmed took two wickets apiece to tie down the Riders lineup.

– Warner’s decision to bat right-handed for three balls v Gayle resulted in a much-needed 14-run surge at the tail-end of the Sixers innings after he had been struggling to get Gayle away.

– Riders lost a trio of wickets in the Powerplay on what might be called a “mini Nelson” with the score on 11, including two taken by Rana in the second over.

– Rossouw and Mohammad Mithun were blazing through an 89-run fourth-wicket stand to threaten the Sixers at 100 for 3 in the 12th, but Taskin removed both in back-to-back overs to snuff out the Riders’ last threat.

Warner might get most of the headlines for his audacious manoeuvre against Gayle, but Liton Das provided the horsepower to drive Sixers through most of the innings. Warner and Liton swapped places in the order after the previous day’s debacle vs Comilla Victorians and it paid off for both, but especially Liton. He took advantage of his promotion to open the innings by bashing the Riders for a 29-ball fifty, including a devastating 17-run sixth over to end the Sixers Powerplay at 61 for 0.

Alex Hales, who now has two ducks in three innings in BPL 2019. The Englishman got a juicy half-volley while backing away to carve Rana through the off side in the second over, but only managed to drive straight to Liton at cover.

Sixers move to four points in a tie for fifth alongside Riders after digging themselves out of last place, which is now held by Khulna Titans, who are on two points.