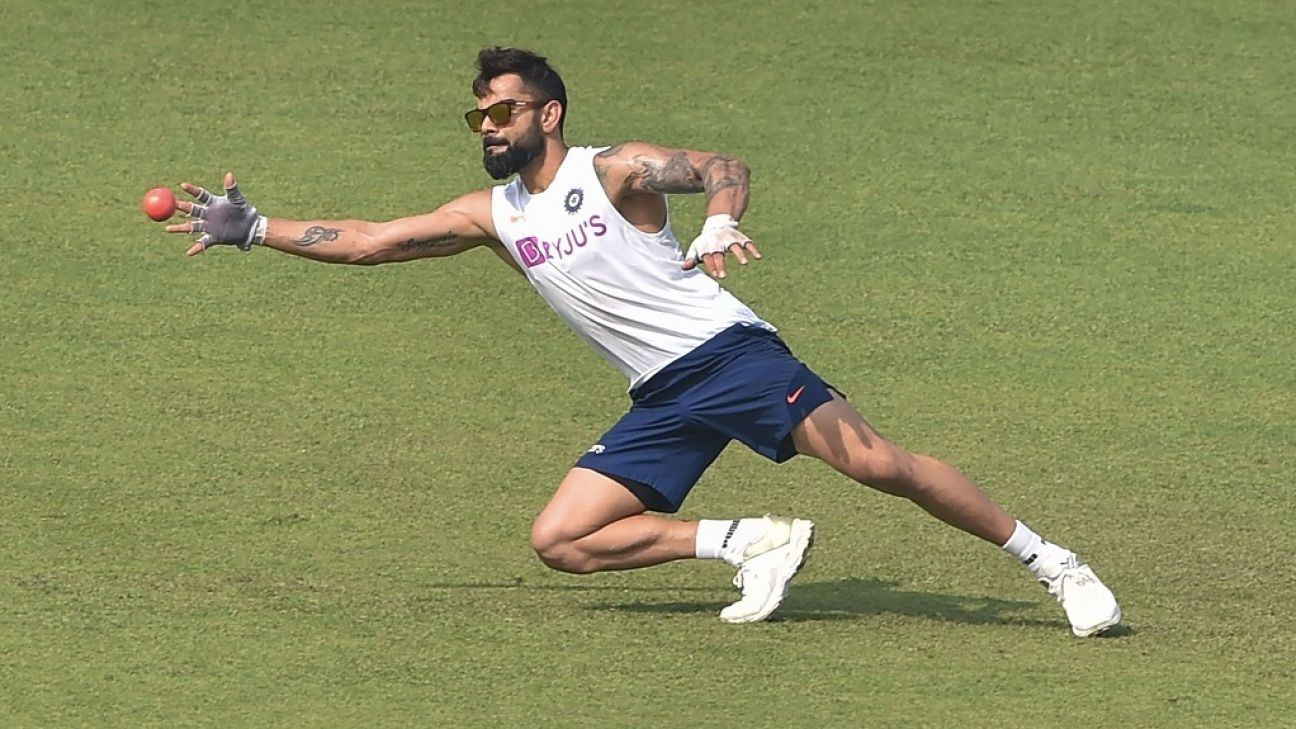 India’s change of heart on pink-ball cricket had to do with the comfort of preparation and the familiarity of home conditions, Virat Kohli said on the eve of their maiden day-night Test in Kolkata, against Bangladesh. Kohli said that unfamiliarity with the format and the challenges of sighting the ball were behind India’s reluctance in the face of previous proposals to play day-night Test matches. Jumping into the format, especially in overseas Tests, can’t be a “sudden thing”, Kohli said.

In May last year, the BCCI had turned down Cricket Australia’s offer to play a pink-ball Test in Adelaide – a tradition since 2014 – and said they would only begin to play in the format in a year’s time. That refusal had come just shy of seven months before the Adelaide Test began on December 6.

ALSO READ: How India and Bangladesh came to play the pink-ball Test

A year-and-a-half on, new BCCI president Sourav Ganguly said that Kohli had been readily “agreeable” to the Kolkata Test being turned into a day-night fixture. Kohli said that playing the format was inevitable, but the details around the plan had made the difference on this occasion.

Are day-night games the future of Test cricket?

“Obviously we wanted to get a feel of pink-ball cricket. Eventually, it had to happen,” Kohli said. “But, you can’t bring up those things before a big tour that you’re going to and suddenly in the schedule, there’s a pink-ball Test, when we haven’t even practiced with the pink ball – we haven’t played any first-class games with pink ball.

“The thing was to experience the pink-ball Test in our own conditions first, so you get the hang of how the ball behaves, what is the way to sight the ball and so on. Then, eventually, going and playing with the pink ball anywhere in the world. So it can’t be a sudden thing. This one, we had been talking about it for a while. As you saw, a few of the guys had been practicing before the series started. So you can’t just, two days before you get on a plane, say ‘play a pink ball Test’ in a week’s time. We didn’t think it was logical from that point of view. It needed a bit of preparation. And once you get a hang of it, once you’re used to playing it, there’s no problem in playing at all.

“We just felt it was more of a spontaneous plan, rather than it being planned over a period of time. Which, I think, any change needs to have that much time for it to sink in, settle in. And then we are open to do anything.”

After BCCI’s refusal last year, James Sutherland, then chief of Cricket Australia, had suggested that India’s reluctance had been based around issues of competitive advantage – more precisely, India’s own disadvantage at having no previous experience in the format, as opposed to Australia, who were early movers.

At the moment, India have effectively had about three weeks to prepare, since the Test was confirmed to be a day-night fixture late last month. India have marched to the top of the World Test Championship table, winning all six of their matches and picking up 300 points. They start as strong favourites for the final Test of the series, which puts them in a position where they could potentially be on 360 points before they head to New Zealand for their next series. In many ways, including the fact that Bangladesh are without two star players, it seems like the ideal time to test the waters.

They had their first full training session under lights on Wednesday evening. An optional training session in Indore after the first Test ended early had been attended by six players, while a lot of other players, including Kohli himself, had been alternating between red- and pink-ball sessions in the lead up to the series. Although there haven’t been any practice games before the series, Kohli said it would be vital on future tours, outlining what an ideal schedule for practice would look like.

It seems only a matter of time for pink-ball Tests to become regular fixtures in India’s schedule. But on a broader front, Kohli doesn’t reckon – and doesn’t want – the format will become the norm.

“I don’t think [it will become the norm] in five-six years,” he said. “In my opinion, this should not become the only way Test cricket is played because then you’re losing that nervousness in the first session in the morning. Yes, you can bring excitement into Test cricket but you can’t purely make Test cricket based on just entertaining people.”