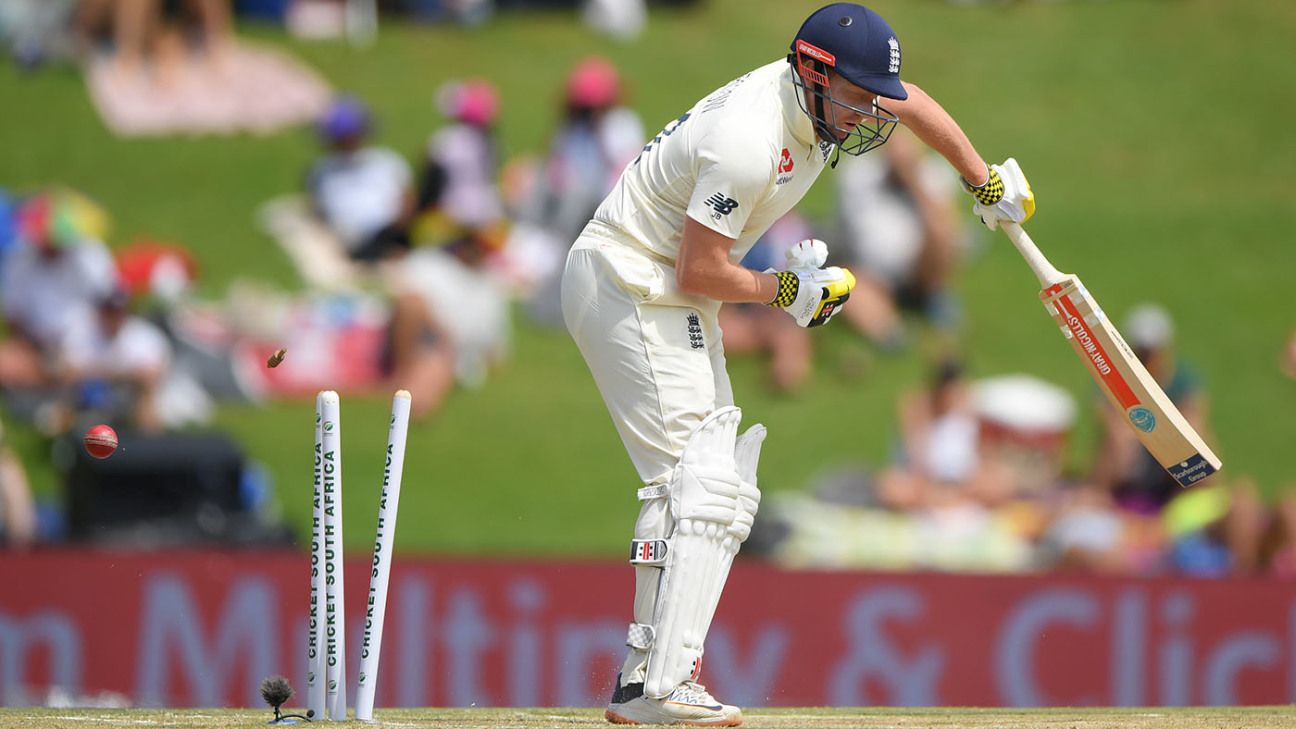 As England’s bowlers hit back in the final session, as the Barmy Army found their voice and South African batsmen were forced to jerk their heads out of the way of some hostile bouncers – and the odd non-bouncer – it was tempting to believe that England were right back in this match.

And it’s true, England could still win this game. We have already seen this year, at Leeds and Lord’s, games where England have won despite being dismissed for under 90 in their first innings. This is a side with the ability to come back from apparently hopeless positions. When you have a player like Ben Stokes in your side, miracles become possibles and hope never dies.

But the best teams don’t rely on miracles. And despite all the drama of the last session in Centurion, the unsettling thought persisted that England – English cricket, even – has already hit the iceberg. The ship is going down. All that matters now is the number of survivors.

If that sounds over the top, you probably need to look at the statistics from previous games on this ground. The highest score ever made in the fourth innings of a Test here is England’s 251 for 8 in 1999-2000. And that only happened because two innings were forfeited – so it wasn’t really a fourth innings at all – and only one captain was entirely occupied with trying to win. It also remains the only Test played on the ground where the final innings of the match was the biggest. The next highest fourth-innings score made here is England’s 228 for 9 to draw in 2009-10. South Africa’s lead at this point is 175. They have six wickets in hand. England need to strike early and often on day three.

If that doesn’t sound so bad, we must also acknowledge that this pitch is deteriorating. The variable bounce has already caused a couple of balls to scuttle and a few others rear and it is most unlikely to get any better. England, meanwhile, are a side that have been bowled out for under 100 three times this year, under 200 nine times (they have had 22 innings in all) and made 400 only once. As a result, it’s hard to be wildly optimistic for them.

More than that, though, England should be frank about the longer-term problems facing them. The spin-bowling cupboard has never been so bare; the lack of openers has never been so obvious; the batsmen keep getting rolled and the bowlers keep looking toothless. You look around the world and other teams – certainly India, Australia, West Indies and South Africa – have fast bowlers who seem to hit the pitch harder and extract more life as a consequence. Kookaburra balls that seem dead in English hands come alive for the likes of Neil Wagner or Josh Hazlewood. And it keeps happening; to deny it is absurd and impossible.

There are issues wherever you look, really: Jos Buttler has been living on potential for years – he has one Test century from 37-and-a-half Tests and is now averaging 34.44 since his recall in May 2018 – while Jonny Bairstow’s habit of being bowled continues. More than a quarter of his dismissals in Test cricket (28.69 percent to be accurate) are coming in such a fashion, which places him fifth in Test history of those who have been dismissed a minimum of 100 times. Quite what he is supposed to have proved since he was dropped at the end of the English summer is unclear: he hasn’t played a first-class game in the interim.

And while Bairstow can count himself a bit unfortunate to receive one that kept a bit low – yes, it hit the top of off stump, but the impressively sharp Anrich Nortje had been making the ball rear horribly – he might reflect that it was his captain who sentenced England to batting last on this surface. Centurion’s pitches have long had a well-deserved reputation for deteriorating. This scenario was far from unpredictable.

Which takes us to the captain. The decision to bowl first here will do nothing to quieten the voices calling for a change. And it’s true, Joe Root’s modest form with the bat – apart from at Hamilton – combined with his underwhelming tactical choices might render him somewhat vulnerable in circumstances where there was a viable alternative.

But Root – loved by his team and keen to learn in the role – is the wrong target here. You can suggest anyone you like for captain – Mike Brearley; Winston Churchill; Gavin and Stacey – the issues will remain. It is not the England captaincy that is hindering the development of fast bowlers, spinners or batsman with the attitude and technique to bat for a long time. It is the structure of the domestic system which has been ruined over the last decade or so by a board with more interest in the bank balance than the scorecard.

Talk of trying to persuade Simon Harmer – whatever his qualities as a bowler might be – to qualify for England only betrays the poverty of the situation. England may, as a result of their history and relative financial wealth, manage to attract players developed overseas to join them. But it only masks the holes. If they really want to improve, they should acknowledge them.

Consistent improvement will only come when the County Championship is valued and nurtured. When it is moved to the prime weeks of the season. When pitches rewards the best and when there is a requirement for the same skills so essential at Test level.

For that to happen, sacrifices will have to be made. White-ball windows will have to be closed; humble pie will have to be eaten. The World Cup triumph, welcome and wonderful though it was, may have enabled the current administration to continue upon a path that prioritised white-ball cricket to the exclusion of red-ball.

So yes, England can win this match. They can win other matches, too. They really do have some hugely talented individuals. They have, in most conditions, what might be referred to as “a puncher’s chance” in boxing.

But whatever happens, we must not ignore the growing evidence. The defeats in New Zealand or the Caribbean; the statistics reflecting the problems in the batting or bowling; the first year without a Test series victory this century. Eden is burning; we either have the courage to change things or accept a place – in Test cricket, at least – among the also-rans.