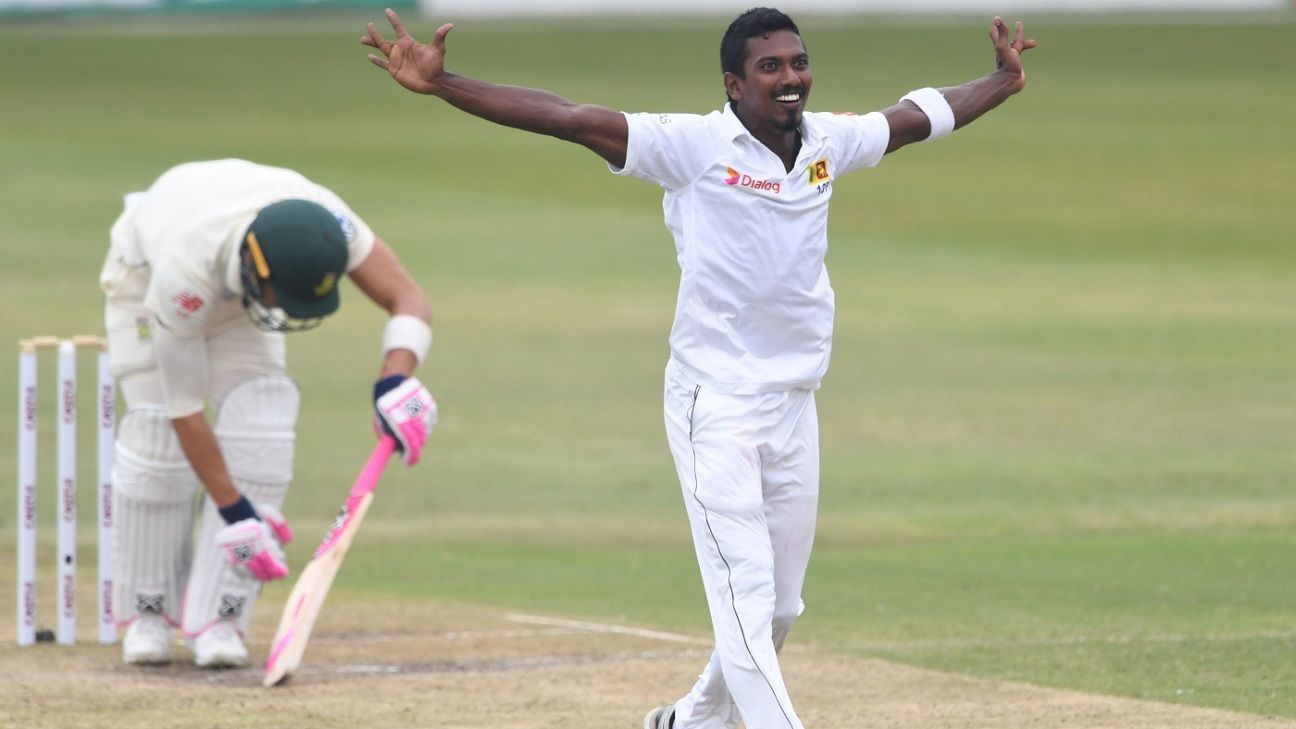 Three of Sri Lanka’s four first-choice seamers are injured for the South Africa series, but through all those mishaps, the team might have unearthed a bowler who could potentially be a game-changer.

Left-armer Vishwa Fernando‘s unbeaten six runs off 27 balls have understandably cornered a lot of attention since the Kingsmead victory, but his 8 for 133 in the match was also instrumental to keeping South Africa in check.

For Suranga Lakmal, by far the most senior bowler in Sri Lanka’s attack, Vishwa not only injects freshness to the bowling outfit, but also makes the remaining bowlers more menacing with his presence.

“We had actually been desperately needing a left-armer in the team,” Lakmal told ESPNcricinfo, two days out from the second Test. “When you have a left-armer, your combination is very different. In the last little while, we played with three right-handers, and you’ve all got the same angle and pace. Lahiru Kumara was the only one who had a bit of extra speed.

“Vishwa is massively important for the other bowlers in the unit as well, because of that angle he creates. When he plays, at least one of us in the unit can bank on getting wickets, because the batsmen have to constantly adjust to the angle, and it’s tough. He’s got the chance now, and I’m sure he’ll continue in the same way. His bowling in that Test was very special. If he can be as threatening as he was to the opposition, it’s because he’s got a lot of talent.”

Sri Lanka were also buoyed in Kingsmead by two other young, inexperienced players. Left-arm spinner Lasith Embuldeniya was playing his first Test, but took a vital 5 for 66 in the second innings to prevent South Africa from establishing an untouchable lead. Batsman Oshada Fernando, who came in at No. 3, also looked comfortable at the top level, making 19 and an important second-innings 37. The new players, Lakmal said, had brought a new energy to the team.

“It’s these new players that made history. Oshada and Embuldeniya showed us their quality in the first match itself. It’s not easy to play in a country like this. Embuldeniya bowled really well, and batted well also. You wouldn’t have been able to tell it was his debut, looking at those performances. Oshada also played like an experienced hand.

“No one thought until the winning run was hit that we could get there. But we didn’t let it go right until the last moment. What we should learn is that even if you’re eight down or nine down, one player can still change the game. Kusal [Perera] showed us that, and the young players helped us get to that stage.”

As Sri Lanka look towards the second Test, with the chance to become the first team from Asia to win a Test series in South Africa, Lakmal is especially glad they are playing in Port Elizabeth. The first five-wicket haul of his career came at this venue, in the Boxing Day Test of 2016. That experience, he said, would prove vital when he leads an attack comprised of frontline bowlers playing their fifth (Vishwa), sixth (Kasun Rajitha) and second (Embuldeniya) Tests.

“Compared to the first time I toured South Africa, I’ve got a lot more confidence now. If you put the ball in my hand, there are no nerves any more. I am probably better at thinking about what the team needs from me, rather than just about my own performance. I’m always in touch with the captain and the coach, and I have a lot of belief now that I can do whatever it is that is needed.

“I know what the pitches are like as well, and it’s great to be able to pass that experience on to the younger bowlers, because they are a very young and inexperienced group.

“What I have to do now is to get another five here. I’m feeling good. In the first Test Vishwa did well. I think this is my Test.”