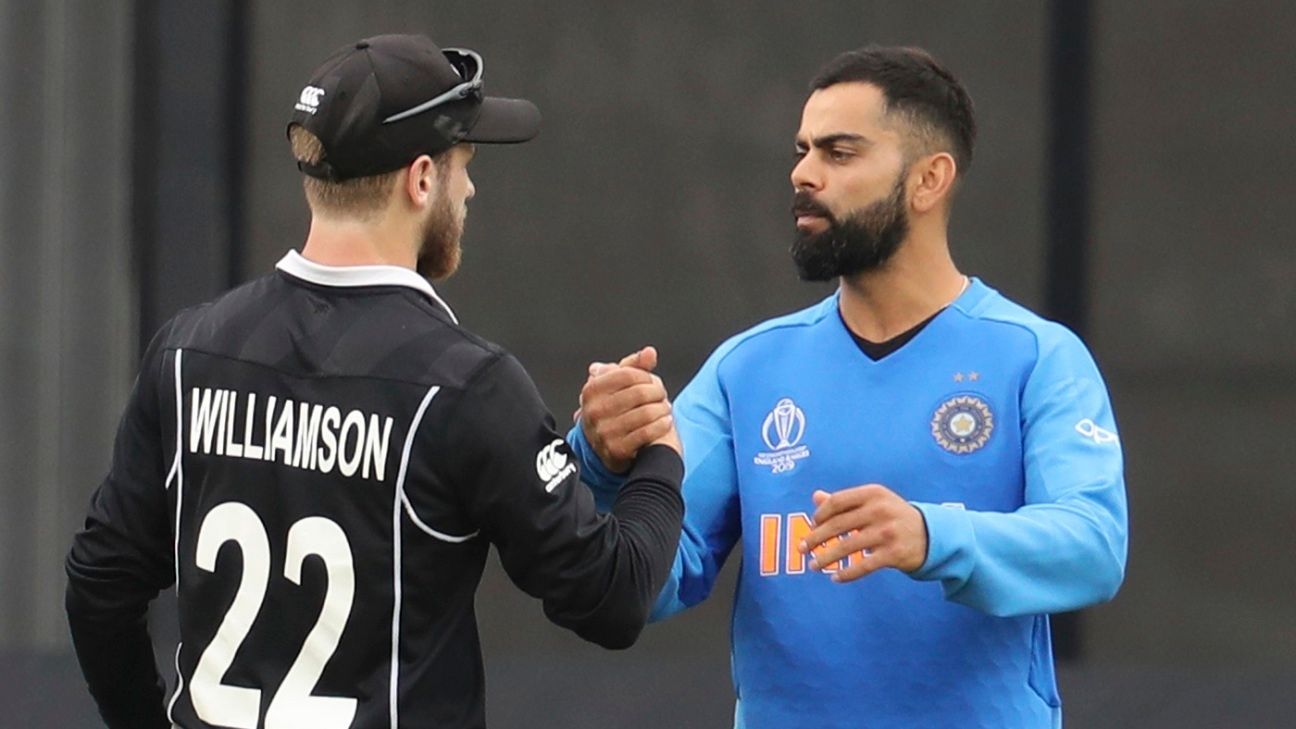 India lost the World Cup semi-final in the first 45 minutes of their chase against New Zealand, and will now return home “heartbroken”, according to their captain, Virat Kohli, who nevertheless insisted that his team had done a “commendable” job in the course of the tournament.

The several hundred India fans, who had opted to stay back for the second day of the rain-interrupted contest, were left aghast as Matt Henry and Trent Boult reduced their side to 5 for 3 and then 24 for 4 in the first Powerplay. And despite a spirited comeback, led by Ravi Jadeja and MS Dhoni, the damage proved too much to overcome in an 18-run defeat.

“The game pretty much changed in those first 40 minutes when we were batting,” Kohli said after the match. “The pressure created was immense in those first 40, 45 minutes. And when you lose 3 for 5 it is very difficult to come back into the game.”

Kohli admitted that India had clearly not been ready for the challenge presented by New Zealand’s seamers, who had been given a total of 239 to defend after adding a further 28 runs to their overnight 211 for 5. While that did not look like a substantial total at the time, a pair of hard-worked half-centuries from Kane Williamson and Ross Taylor had made it clear that the surface was not easy for run-scoring.

“New Zealand, the way they bowled, they did not provide any opportunities for us,” said Kohli. “For the first seven or eight overs we didn’t get a ball to drive. That shows the kind of control they bowled with and they put the fielders in the right positions and that was a perfect spell of fast bowling with the new ball, which really put us under a lot of pressure.

Watch on Hotstar: How India’s wickets fell in dramatic run-chase

“We are not shying away from accepting that we didn’t stand up to the challenge and we were not good enough under pressure. We have to accept that and accept the failure as it shows on the scoreboard.”

According to some reports, New Zealand prepared for the contest by watching videos of Pakistan’s victory over India in the 2017 Champions Trophy final – another match which featured key early wickets in India’s run-chase.

“I wasn’t surprised with how New Zealand played, to be honest,” said Kohli. “If there is a low total, we knew there’s probably only one or two sides in world cricket that will put seven fielders in the ring and one was going to be New Zealand.

“We knew they were going to attack more. They will not let the game go to the end, they won’t take it deep, they will go all out and play the game. Today, also, third man was up in the ring. In the one-day game you had five catching fielders. So they know how to put pressure because they play very consistent cricket.”

At 5 for 3 after 19 balls, India’s soft underbelly – their middle order – was brought into play earlier than at any other stage of the tournament. In each of their previous contests, at least one of the top three had endured to drop anchor into the middle overs, not least Rohit Sharma, who had notched five hundreds in his eight previous innings.

“I don’t think that I would like to break things down immediately, but in time we’ll have to sit down and analyse where we went wrong and the things we could have done right in this game particularly,” said Kohli.

He did, however, add that a “couple” of batsmen might have reason to question their shot selection. He didn’t name names, although both Rishabh Pant and Hardik Pandya fell to rash aggressive shots after digging in hard to rebuild the innings. Pant opted to slog-sweep Mitchell Santner and bring to an end a dogged 47-run partnership, before Pandya, too, lost his head to a mow across the line and picked out Kane Williamson in the deep.

Immediately after Pant’s dismissal, TV cameras caught Kohli swiftly walking out of the Indian dressing room to have a chat with head coach Ravi Shastri. Was he furious at the youngster’s shot selection?

Kohli categorically said that was not the case, claiming instead that he wanted to discuss with Shastri the mini-targets that the team needed to set during such a chase. As for Pant, Kohli said he already understood his mistake but it was all part of the learning process for a 21-year-old player who had not even been an original selection in this, his first World Cup.

“He is an instinctive player and did well to overcome that situation and stringing a partnership with Hardik,” said Kohli. “The way they played after the loss of four wickets rather, was quite commendable. He’s still young. I made many errors when I was young in my career and he will learn, he will look back and think, yes, he could have chosen a different option in that situation and he realises that already.

“I’m sure he will reflect on it and he will come out stronger. The talent is there for everyone to see and the character is there, but, as I said, yes, a few shots, not just Rishabh, but that happens in sport. You make errors, you make decisions which are not right at that time and you have to accept it.”

The defeat will be doubly painful for Kohli because, once again, he failed with the bat in a crucial knock-out contest. In his three World Cup semi-final appearances, he has made scores of 9 (2011), 1 (2015) and 1 again today. Even in the Champions Trophy final in 2017, he made just 5.

Today he chose to review his lbw decision after being struck on the pad by Boult, but was sent on his way after the umpire’s call was upheld by the replay. Kohli flung his bat in anger and disappointment as he left the crease.

He admitted afterwards that he had been unable to control his emotions in the moment, but owned up to failing when it mattered most for his team. “It is very disappointing not turning up when the team wanted me to. Obviously, it feels bad. Everyone gets disappointed when they get out so it was a natural reaction.”

Leading India at a World Cup for the first time, Kohli’s dream of making the final has been shattered despite India finishing top in the group phase. He did not hide his disappointment. “Of course, very disappointed,” he said, “to just go out on the basis of 45 minutes of bad cricket is saddening and it breaks your heart also, because you have worked so hard throughout the tournament to build momentum.

“You finish No. 1 in the table and then a spell of bad cricket and then you are out of the tournament completely. But you have to accept it.

“We are sad, but we are not, you know, devastated because of the kind of cricket that we played in this tournament. We know where we stood as a team and today we were not good enough and that is the nature of this tournament. A bad day in the knockout stage [and] you are out of the tournament

“But having said that, we have qualified to the semis and we have played some really good cricket, so we should be also proud of the way we have played and look at the positives also, because there were a lot throughout this tournament, especially Rohit’s performance was standout, Jasprit [Bumrah] with the ball and Jadeja given the opportunities. So there are many things that we can take back as positives.”