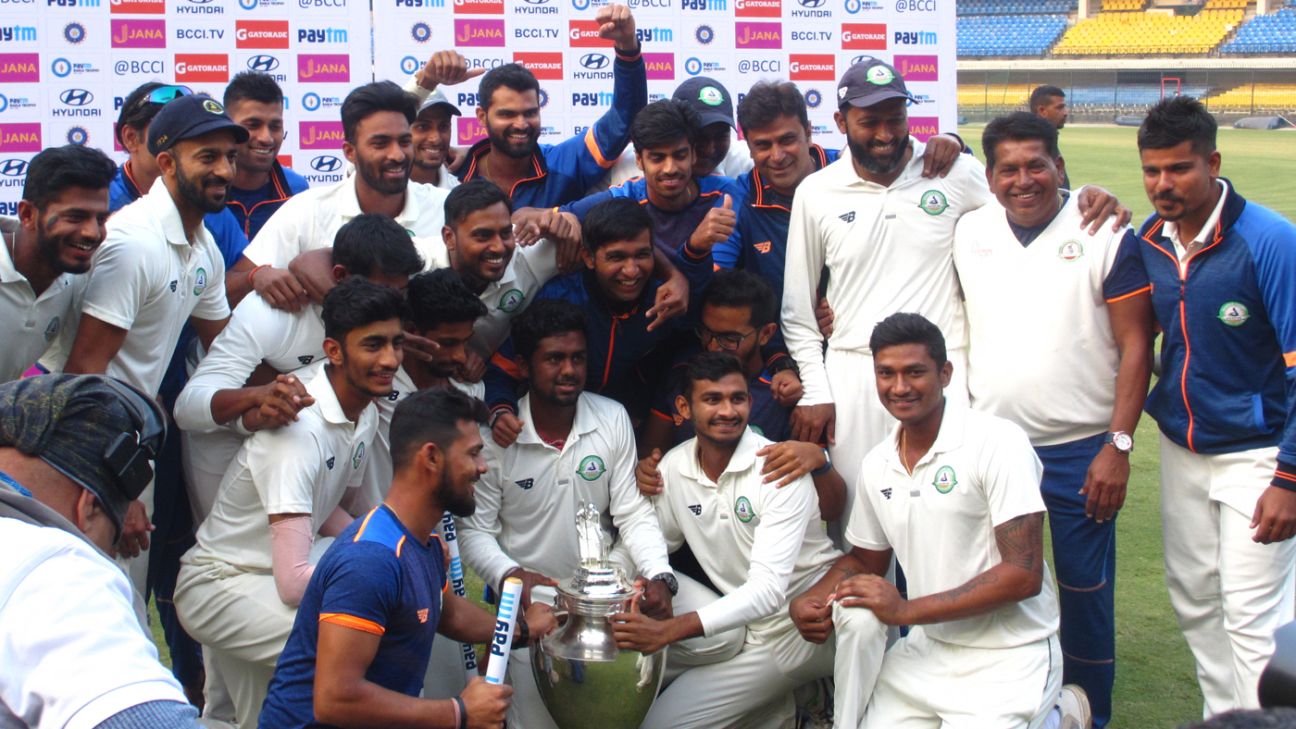 Having gone into the final round of matches looking quite healthy, Karnataka are in a wait-and-watch situation after being beaten inside two days by Baroda. Their loss, however, guaranteed a knockouts berth for defending champions Vidarbha.

A win for Karnataka could have put them No. 1 in the group and set up a quarter-final contest against the plate-group toppers. And while this is no longer possible, the only way they can’t make the knockouts now is if Punjab win with a bonus point – which they are on track for, against Bengal – and if Madhya Pradesh and Himachal Pradesh win their respective games against Andhra and Kerala.

MP, however, are hanging by a thread against Andhra. Having conceded a lead, MP, currently on 24 points, need to beat Andhra to qualify for the knockouts. But, having been bowled out for 91 in the first innings of a low scoring game where Andhra managed a 41-run lead, they trail by 239 with three Andhra second-innings wickets still remaining. Andhra too are in need of a win since a loss will mean relegation to Group C.

Coming back to Baroda: having done whatever was asked of them, they can reflect on a job well done against Karnataka on a turner at the Moti Baug grounds. Spinners accounted for 26 of the 30 wickets as Baroda huffed and puffed their way home in a chase of 110, with Yusuf Pathan coming up with a match-winning 41.

It might still have not been enough without vital contributions from the lower order. Baroda were 89 for 7 before Bhargav Bhatt and Rishi Arothe, son of former Baroda batsman and women’s coach Tushar Arothe, added 21 runs between and secured the hard-fought victory. Bhatt, the left-arm spinner, also played a key role with the ball, finishing with a match haul of 8 for 143.

They will now need an epic Bengal stonewall in the second innings to deny Punjab, then for Andhra to beat MP and also hope Himachal either lose or take a first-innings lead at most against Kerala. While Baroda are equal on points with Gujarat – who also have the same number of wins – an inferior quotient could yet seem them miss out should these results go against them.

Having racked up 363, Saurashtra are in a strong position against Vidarbha. However, they will need an outright win to top the group. Meanwhile Gujarat, who can only wait and watch, will want Bengal bat out a draw against Punjab. At the end of the second day, Punjab are ahead of Bengal by 170 with Anmolpreet Singh unbeaten on 124. Shubman Gill, their highest run-scorer this season, made 91.

What happens in Group C?

Rajasthan are through, leaving Uttar Pradesh and Jharkhand tussling for the second spot. Jharkhand need to win outright and have made up for losing a day due to the weather by skittling Jammu and Kashmir for 151, but UP are in line for an innings win over Assam, as they’re ahead by 202 with five wickets in hand. Riku Singh is four runs short of his fourth first-class century while Akshdeep Nath, the captain, made 81. If UP win, Jharkhand will be out even if they pocket seven points.

Uttarakhand are the front-runners, but the group has truly come alive with Bihar threatening to qualify. They’re in line for a victory, but they also need Uttarakhand to get no more than a first innings lead. If this happens, both sides will be on 40 points, with Bihar qualifying on account of more outright wins. However, the ground reality is different. Uttarakhand have enforced the follow-on against Manipur, who trail by 147 but have already lost one wicket in their second innings.