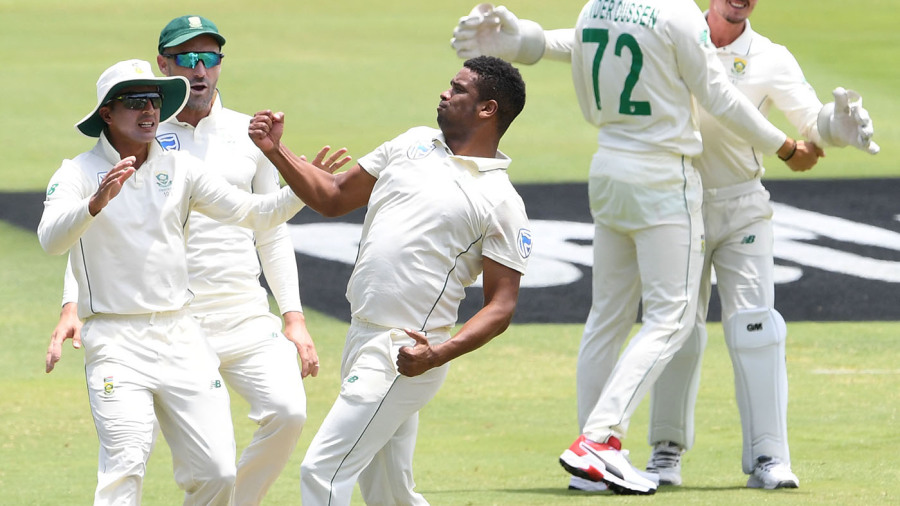 South Africa’s bowlers, led gallantly by the retiring Vernon Philander, put their side in a commanding position before a cache of top-order wickets left England with some hope after an intriguing second day at Centurion.

Philander did not concede a run from his opening five-over spell, which yielded one wicket, before finishing with the remarkable figures of 4 for 16 off 14.2 overs as England were restricted to just 181 in response to South Africa’s first-innings 284. He was well supported by strike bowling partner Kagiso Rabada and Anrich Nortje, the latter critically accounting for middle-order danger men Ben Stokes and Jonny Bairstow as the hosts thrived where the visitors had toiled the day before.

But, with the second-day pitch offering just enough variation and bounce to sow some uncertainty in the batsmen’s minds, England’s bowlers were able to make inroads late in the final session, sending South Africa to the close at 72 for 4 with debutant Rassie van der Dussen not out 12 and nightwatchman Nortje on four.

South Africa had resumed on 277 for 9 before Stuart Broad had Philander caught behind by Jos Buttler for 35 with the 11th ball of the day. Broad, who had dismissed Rabada with the last ball of the opening day, finished South Africa’s first innings with four wickets, as did Sam Curran.

Philander and Rabada had England floundering at 15 for 2 early in their reply. Philander dismissed Rory Burns in the fourth over of the innings, caught behind by Quinton de Kock with a beautiful delivery that zeroed in on off stump and clipped the bottom of the glove.

Burns had already produced one nervous moment when he seemed to take his time in calling for a review when he was given out, caught behind off Rabada, on the first ball of the innings. Replays showed Burns had merely clipped his front pad with the bat rather than the ball and the decision was overturned.

Rabada had Dom Sibley caught behind in a messy dismissal that initially wasn’t given out by umpire Paul Reiffel, prompting a review from South Africa before Sibley walked. Joe Denly called Sibley back to wait for the DRS result, but Reiffel instructed Sibley to keep walking as his reaction had suggested he’d hit the ball, which was confirmed on replay.

Joe Root and Denly were given a tough examination by Philander and Rabada and Root had to be checked over by the physio after being struck a heavy blow on the helmet by a Rabada bouncer, though he was given the all-clear. Denly, on nought, survived a dropped catch a short time later when he edged Rabada towards slip van der Dussen, who grassed the chance as de Kock dived across him.

The England pair set about launching a rescue mission, pushing their team to 60 for 2 at lunch, but Philander, who conceded his first run – a single to Root – on the 34th ball he bowled, struck with his 37th when he tempted Root down the pitch and found an edge that went through to de Kock.

Denly shared a 72-run stand for the fourth wicket with Ben Stokes but, having brought up his half-century with a lovely four driven off Dwaine Pretorius through cover, Denly was gone three balls later sending an inside edge off Pretorius through to de Kock.

Stokes was a welcome sight at the crease for England, who know only too well his ability to produce heroics when needed and who would have been worried by his absence from the field for a large part of the third session on day one as he was feeling unwell, but his stay at the crease was curtailed as Nortje came to the fore. Nortje bowled Jonny Bairstow through the gate with a clever ball that kept a little lower than expected and then had Stokes caught behind for 35.

An excellent catch at short leg by Zubayr Hamza sent Sam Curran back to the pavilion and handed Rabada his second wicket and when de Kock brilliantly caught Buttler off the bowling of Philander, he joined Mark Boucher (four times), AB de Villiers and Denis Lindsay as the only South African wicketkeepers to take six catches in an innings. Only four keepers have taken more – with seven catches – and none of them for South Africa.

England conceded a first-innings lead of 103 a short time later after Rabada had Broad caught by Dean Elgar and Philander bowled Jofra Archer.

Anderson, who also took a wicket with the first ball of the match, struck in the first over of South Africa’s second innings to dismiss Aiden Markram lbw for 2. Broad then had Hamza, the hosts’ second-highest scorer in their first innings with 39, caught down the leg side by a diving Buttler, who then took another tidy catch leaping to his right after Archer found Elgar’s inside edge.

England had their fourth when Archer had Faf du Plessis caught at long leg via a down-on-one-knee scoop that flew straight to Curran.

Van der Dussen and Nortje saw their side through to the close without further loss and, with their first-innings top-scorer de Kock still to make an appearance, South Africa held the upper hand.