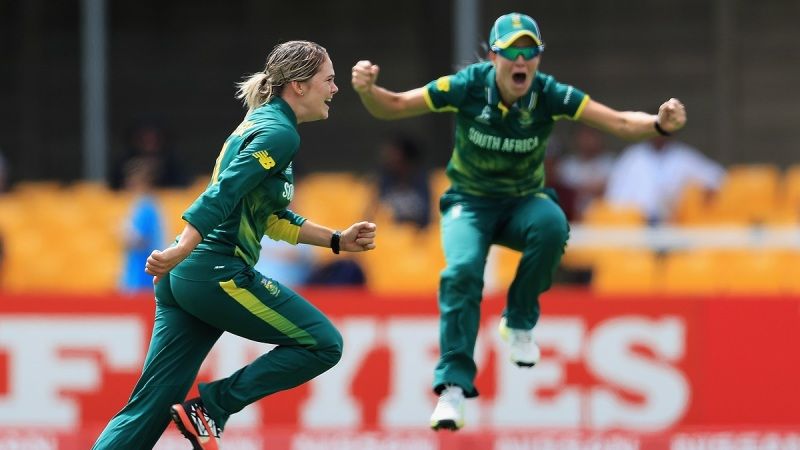 South Africa captain Dane van Niekerk‘s all-round brilliance set up a resounding seven-wicket victory over Sri Lanka in the first T20I at Newlands. Van Niekerk lead the way with three cheap wickets as Sri Lanka were held to 90 for 8, and then followed that up with an unbeaten 71 from 55 deliveries to complete the hosts’ chase with more than five overs to spare.

Sri Lanka captain Chamari Atapattu called correctly at the toss and opted to give her team the chance of setting a total but van Niekerk’s 3 for 12 scuppered a good start and rattled the middle order.

Opener Hasini Perera combined with Anushka Sanjeewani in an opening stand of 20, Sanjeewani swiping two leg-side boundaries in Masabata Klaas’ first over but then chipping a drive to Tumi Sekhukhune in the covers attempting a third. After her dismissal, Perera helped to guide Sri Lanka to the reasonably stable position of 26 for 1 at the end of the Powerplay, but the innings began to stagnate as van Niekerk brought herself on with the field spread and started to choke the flow of runs.

Her first over went for just 2 runs, and with the first ball of her third she had a frustrated Perera caught at short fine leg by Lara Goodall for 27 – the top score of the innings. In her next over, van Niekerk struck twice to have Shashikala Siriwardene caught by a backpedaling Shabnim Ismail at long off before bowling a slogging Atapattu with one that spun in to the left-hander.

In the very next over, Sekhukhune flattened Nilakshi de Silva’s leg stump with a full, swinging delivery and Sri Lanka were floundering at 53 for 5 in the 14th over. Imalka Mendis struck two late boundaries in her 25 to boost the run-rate a little, but Sri Lanka’s eventual total was well under par.

Van Niekerk showed just how far beyond a competitive total the visitors were when she strode to the crease and stroked four boundaries to motor through the Powerplay at a run a ball. Unafraid to loft the ball, van Niekerk brought up a 40-ball fifty in the 11th over, crunching three boundaries in the over by Inoka Ranaweera.

By then, South Africa were already closing in on victory, and wickets at the other end did little to stem van Niekerk’s charge. Tazmin Brits was the next highest scorer with 10, but van Niekerk entered the 70s and ended the game with her 13th boundary, slapping medium pacer Udeshika Prabodhani straight back over her head to the boundary.