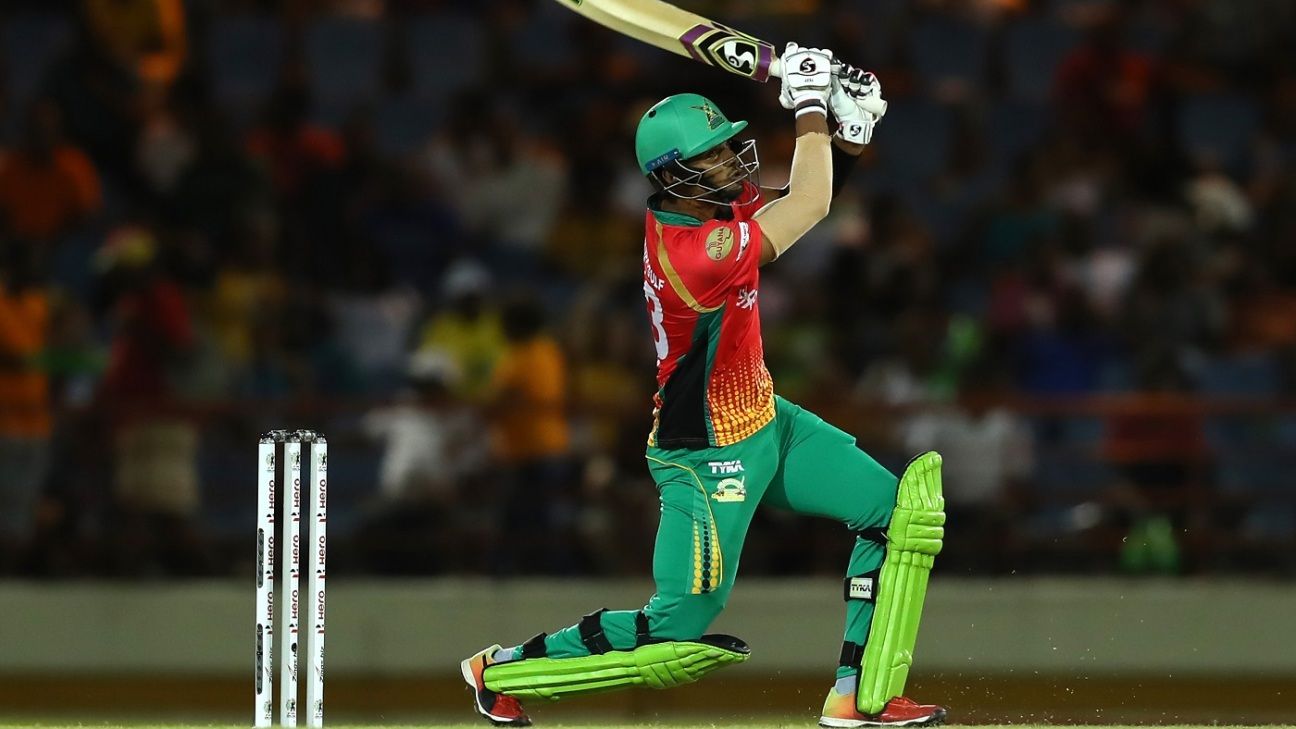 Some marquee overseas names pulled out of CPL 2019 and some usual (local) suspects like Andre Russell, Kieron Pollard and Chris Gayle didn’t make the final. However, some unlikely heroes emerged to dominate ESPNcricinfo’s team of the season

King, a ninth-round pick in the draft, is the first name on our team sheet. True to his name, he rolled out a number of regal strokes, reeling off 496 runs in 12 innings at an average of 55.11 and strike-rate of 149.94. King’s tally included an unbeaten 132 off 72 balls – the highest individual score ever in the CPL – that extended Amazon Warriors’ winning streak to 11 and vaulted them into their fifth final.

The record-breaking hundred moved Amazon Warriors coach Johan Botha and his family to tears and perhaps signalled the change of guard in the league.

Notably, King also had the maximum batting impact as per ESPNcricinfo’s Smart Stats with a score of 662.58.

Simmons wasn’t supposed to be part of CPL 2019 in the first place. After finding no takers in the draft, Knight Riders picked him as a temporary replacement for Colin Munro, who missed the early stages of the tournament because of international commitments. Then, after regular captain Dwayne Bravo was sidelined from the entire season with injury, Simmons became a permanent part of the side.

While one end was a revolving door at the top – partly due to a finger injury to Sunil Narine – Simmons established himself as Knight Riders’ No.1 opener and cracked five half-centuries, including a measured 51 off 47 balls that secured his team a home qualifier against eventual champions Barbados Tridents. All up, Simmons made 430 runs in 11 innings at an average of 39.09 and strike-rate of 150.34.

Having racked up 457 runs in 11 innings in 2018, Phillips followed it with another productive season that netted him 374 runs in 10 innings at a strike-rate of nearly 145.

For Jamaica Tallawahs, the story of the season was Phillips or nothing. He struck three fifties, including a boundary-laden 87 off 49 balls, which in isolation was among the knocks of the tournament. By the time Phillips was dismissed, Tallawahs were 123 for 6 in pursuit of 177 and they eventually fell short. Phillips was also sharp behind the stumps and left some of our collective jaws on the floor when he flew to his right and plucked a one-hander to send back St Kitts & Nevis Patriots’ Devon Thomas.

The ice-cool Malik proved the perfect foil for King’s fire for Amazon Warriors. In addition to seamlessly closing out the innings with the bat, Malik marshalled his attack expertly and his tactical nous came to the fore when he unleashed Imran Tahir on Chris Gayle at Kingston and shut down Tallawahs’ chase by giving his spinners nine overs in a row first-up.

And when Tallawahs reduced Amazon Warriors to 8 for 4 in the return fixture, Malik soaked up all the pressure and rescued his team to 156 for 6 with a match-winning 73 not out off 45 balls. The title slipped away from Amazon Warriors’ grasp once again, but Malik left his mark with 317 runs in 12 innings at an average of 63.40 and strike-rate of 124.31

Pollard marked his debut for his home franchise with a violent 47 and although the rest of the Knight Riders lost steam towards the end of the season, Pollard kept blowing hot, especially in the slog overs. He blasted 223 runs off 117 balls between overs 16 and 20. Only Fabian Allen and JP Duminy had a greater strike-rate than Pollard among batsmen who had faced at least 50 balls in this phase.

When Knight Riders seemed to have dug themselves into a hole in the Eliminator, it was Pollard who hauled them out of it with an unbeaten 26 off nine balls.

Power-hitter. Electric in the field. Bowls fast-ish left-arm spin. Allen has all the makings of a T20 star, and this season he even had Ian Bishop tweeting: “Lots of sparkling batting, but Fabian Allen is so cool. I hope West Indies target him for a special course of development”. This, after Allen had followed his two wickets with 37 not out off 15 balls in a successful chase of 242 against Tallawahs in Basseterre. Allen shellacked 177 off 79 balls between overs 16 and 20 at a strike-rate of nearly 225. Allen’s Smart strike-rate, meanwhile, soared to 235.24.

Bowling the tough overs in the Powerplay with just two men outside the circle could be a nightmare for the bowlers. But this seems to be Green’s dream destination: he bowled 168 balls in the first six overs this season, conceding just 151 runs while picking up five wickets. Only Sunil Narine (3.50) had a better economy rate than Green (5.39) in the Powerplay in CPL 2019. Green’s handy batting and leadership qualities add more value to the team.

In a season where bowlers travelled for runs, Shepherd impressed with his hit-the-deck bustle and was the joint second-highest wicket-taker for Amazon Warriors with 13 scalps in nine innings at an economy rate of 8.32. In addition to being a safe outfielder, he can also swing the bat, as he showed during his unbeaten 32 off 13 balls against Knight Riders.

Reifer didn’t have too much to do with bat or ball until the knockouts. In the second qualifier against hosts Knight Riders, he silenced a vociferous crowd with a crucial all-round performance. After helping Tridents loot 42 off their last two overs, he pinned a rampaging Seekkuge Prasanna and then Khary Pierre to put Tridents in the final. And on the big night, his left-arm angle and variations snapped Amazon Warriors’ stellar winning run and gave him figures of 4 for 24 – the best in CPL finals.

After playing understudy to Sandeep Lamichhane in the early half of the league, Walsh Jr set the tournament ablaze once the Nepal legspinner left the Caribbean to join the national side. Despite playing just nine matches this season, he claimed 22 wickets at an economy rate of 8.28. The USA legspinner was also a fireball in the field and ran out Pollard in the second qualifier to tip a thriller Tridents’ way. From warming the benches to the MVP of the tournament: it was one hell of a season for Walsh Jr.

The South African took at least two wickets in seven of the nine games he played this season. He often shared the Powerplay load with Green and was also thrifty outside of that phase, excelling with his stock ball as well as the wrong’un. His 16 wickets and vaudevillian celebrations jazzed up the tournament further.

The Sussex batsman was vacationing in Miami on Saturday and on Sunday, the day of the final, jetted to Trinidad and joined Tridents as a replacement for the injured JP Duminy. He bagged a duck but by the end of night lifted the title with Tridents. As simple as that.

With inputs from Gaurav Sundararaman