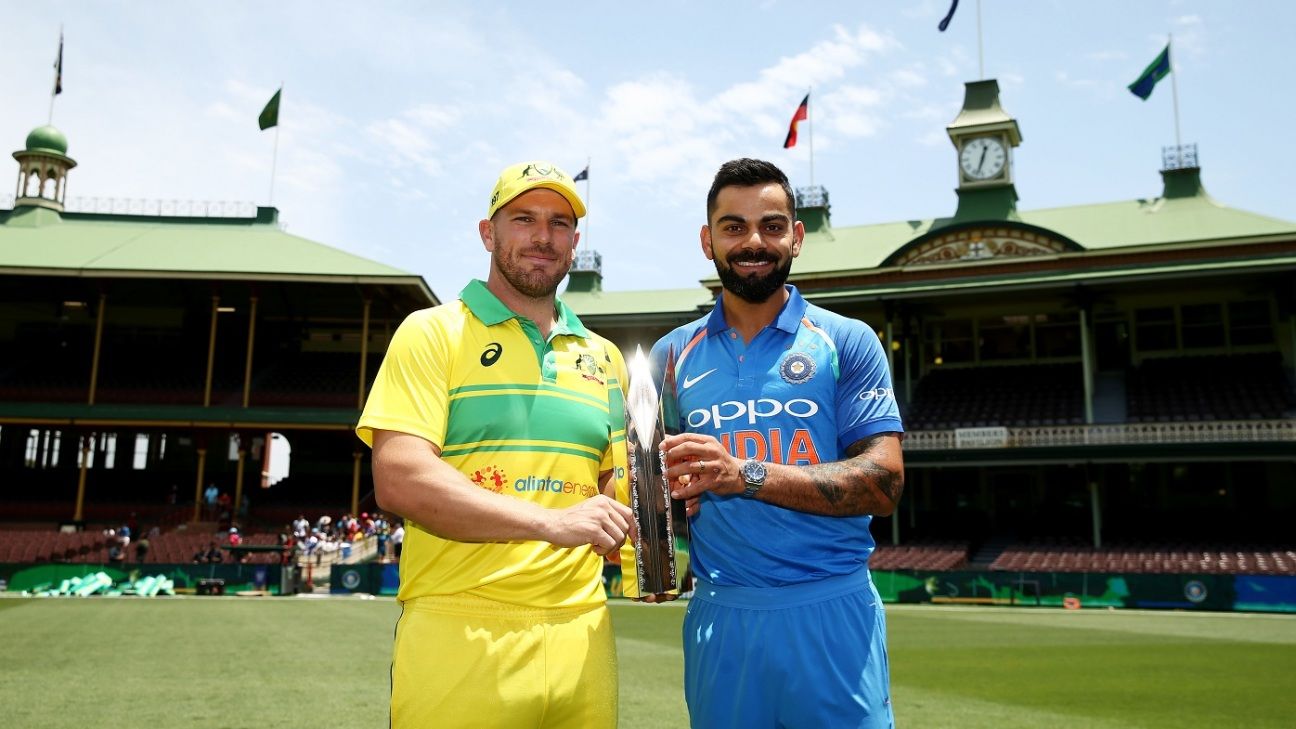 Five days after the end of the Test series, where India celebrated their historic victory, the attention now shifts to the main one-day event of the year: Mission World Cup.

These are two teams in vastly different positions at the start of the final run-in to the tournament in England. Australia, the defending champions, have won three of their last 24 games since the end of January 2017 and have a multitude of questions over their team. India, one of the favourites, are very close to knowing the players they’ll take.

The contrast was stark in the build-up days with Rohit Sharma and Virat Kohli saying it’s unlikely they’ll be many changes from the squad on show in Australia – save for the rested Jasprit Bumrah to return and some competition for the reserve pace-bowling slots – while Australia captain Aaron Finch confirmed another much-changed XI with new players in new positions and incumbent players taking new roles.

Just matching up the top three of both teams doesn’t feel like a contest: Finch, Alex Carey and Usman Khawaja against Rohit, Shikhar Dhawan and Kohli. If India’s top trio fire, as they did consistently last season, they will be very hard to stop for a new-look Australia bowling attack.

While India can think of the World Cup from a position of strength, Australia are desperate for short-term success as well. They have yet to win a series in any format since the ball-tampering scandal. It would certainly go against the form guide if they ended that run here.

Glenn Maxwell has prompted significant debate in the last few days with his continued Test omission and now he finds himself at No. 7 in the one-day side, tasked with bringing power to the latter stages of an innings. He appeared somewhat frustrated in that role against South Africa in Hobart earlier this season and it is unlikely to provide much chance to build an innings although Finch offered the prospect of him moving up the order in certain situations.

Does MS Dhoni have a final hurrah in him at the World Cup? A great player, he has looked a shadow of his former self in recent times and hasn’t passed fifty in 14 ODI innings. That is partly due to batting behind a mighty top order, but even when given the chance to dictate a passage of play he hasn’t seemed to have the touch of old. One thing in his favour, however, is that his glovework remains sharp and he continues to produce some terrific work against the spinners.

All change, please. Australia have mixed things up in their one-day side again in the search for answers. Carey will open with Finch, with the recalled Khawaja and Peter Handscomb either side of Shaun Marsh. Peter Siddle will play his first ODI in more than eight years while Adam Zampa misses out. Mitchell Marsh was ruled out yesterday due to illness.

A lot for India revolves around what happens to Hardik Pandya following his controversial comments on an Indian TV show. In an ideal world he provides the balance that allows three seamers and two spinners, but if he isn’t there then Ravindra Jadeja is the all-round option while another seamer plays.

After the damp end to the Test match and more rain in recent days, the good news is that the forecast for a warm, sunny Saturday in Sydney. The SCG pitch has been flat this season which should bode well for a high-scoring contest although there appeared a decent covering of grass left on the surface.

“While it would have been great to have a settled side for the last 18 months there’s still enough time to get it right and make sure come that World Cup that we are ready to go with a really balanced and settled side.”
Aaron Finch on getting the team right

“We’ve been wanting to figure out who apart from Bhuvi and Bumrah are the two or three guys we can bank on. And these games will provide an opportunity for those guys to firstly present their case strongly and secondly gain confidence from playing these games.”
Virat Kohli on the battle for seam-bowling spots