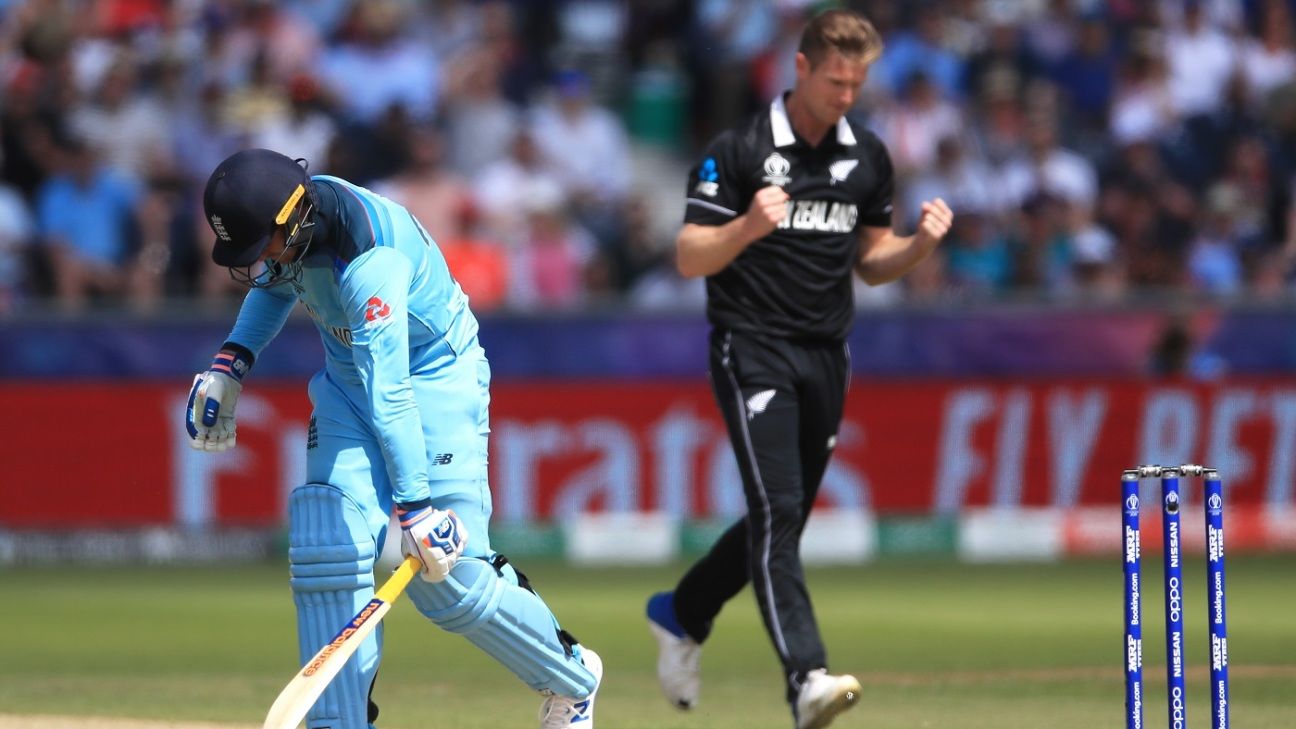 Do you ever get the sense that no-one really rates you? To judge by the line of questioning on the eve of his biggest match in four years, Kane Williamson might have been excused for thinking that he had already lost the World Cup final (again).

But, as he reflected on the truism that every under-dog has his day, New Zealand’s captain was at least happy to accept that England should be seen as favourites, and that they should therefore absorb all the pressure that comes with that status.

“There’s a few more here today,” Williamson quipped as he took his place at pre-match press conference in the bowels of the Real Tennis court at Lord’s, to be quizzed on England’s strengths, New Zealand’s weaknesses, and what it would do to a team of self-evident nice guys to be cast in the role of nasty party-poopers.

Everything and anything, in fact, apart from the prospect of actually going out there on Sunday and winning the damn thing on their own merit.

“We are quite keen on winning as well,” Williamson protested with a smile at one stage, after another enquiry about how it would suit New Zealand to play without any expectations. “There’s all different bits of pressure on anybody, whether you are favourites or not.”

“Whatever dog we are, it’s just important that we focus on the cricket that we want to play and we have seen over the years that anybody can beat anybody regardless of breed of dog.”

Williamson on the underdog tag

But broadly speaking, Williamson won’t care one jot if New Zealand are being written off before a ball has been bowled. It did them no harm in their thrilling semi-final win over India, after all -they had started the second day of that rain-interrupted contest with just 211 runs on the board from 46.1 overs – with many Indian fans and pundits already planning ahead for the final.

And it’s done New Zealand little harm in a World Cup history in which no side other than Australia has won more matches than them in the course of 12 tournaments and 44 years.

Addressing New Zealand’s underdog status, Williamson said: “A lot of people say that on a number of occasions, which is great and I think England rightly so deserve to be favourites. Coming into this tournament from the start, they were favourites and they’ve been playing really good cricket.

“But whatever dog we are, it’s just important that we focus on the cricket that we want to play and we have seen over the years that anybody can beat anybody regardless of breed of dog.”

Anyone would think it was England who were playing in their second World Cup final in as many editions, with New Zealand the rank outsiders who were back in the big time for the first time in 27 years.

However, Williamson was also careful to play along with their lack of expectation. Asked about New Zealand’s experience in that last final in 2015, when they ran into an Australian team on home soil with the bit between their teeth, he gave the impression that there had been few positive takeaways.

“There’s a whole heap of different things, I suppose,” he said. “We were in a different part of the world on a different surface against a different opposition, and both sides are very different from four years ago, so it’s kind of hard to compare those times.

“But I prefer winning than losing,” he added. “That is probably the best way to say it. Any experience that you have is an opportunity to learn and sometimes tough experiences, being on the wrong side of results, can slap you in the face and give you a glaring lesson, and if you ignore that, I don’t think that is a positive thing.

“So treating both of those, the outcomes with respect and trying to learn from them to be better as a group and as an individual, I think is the best part.

“Whether having had experience in a final or not is a good thing, any final you get the opportunity to play in is a really positive thing. But at the same time, as we know, in this game nothing promises, so it does come down to putting a performance on the board that gives us the best opportunity to win.”

On New Zealand’s preferred game plan, of assessing the minimum total required for victory then fighting tooth-and-nail with the ball to defend it, Williamson praised his side for their adaptability, but warned that they’d have to get their calculations spot-on to see off an England team with proven matchwinners all down the order.

“It is a challenge,” he said. “I think most teams expected scores to be a lot higher than what we have seen, but the reality of it is that they have been quite tough surfaces that have aged throughout the day, so trying to make those adjustments are really important.

“I think if you are focussing on what you need to do as a group and the cricket that you want to play, then making those adjustments [is possible].

“In the last game [the semi-final against India], I think both sides looked at the surface, thought it was a really good one, and thought perhaps 300 was what was going to be at play, but after 15 overs or so, we were having conversations thinking “This is really quite difficult and 300 looks like a long, long way away”

“So if we are able to perhaps achieve something a little bit more realistic on that surface, then that gives you every chance to win the matches.

“We have done it on a number of occasions but we will have to be good at doing that tomorrow (Sunday). It is a new challenge for each occasion, where we will need to make those adjustments quickly.”