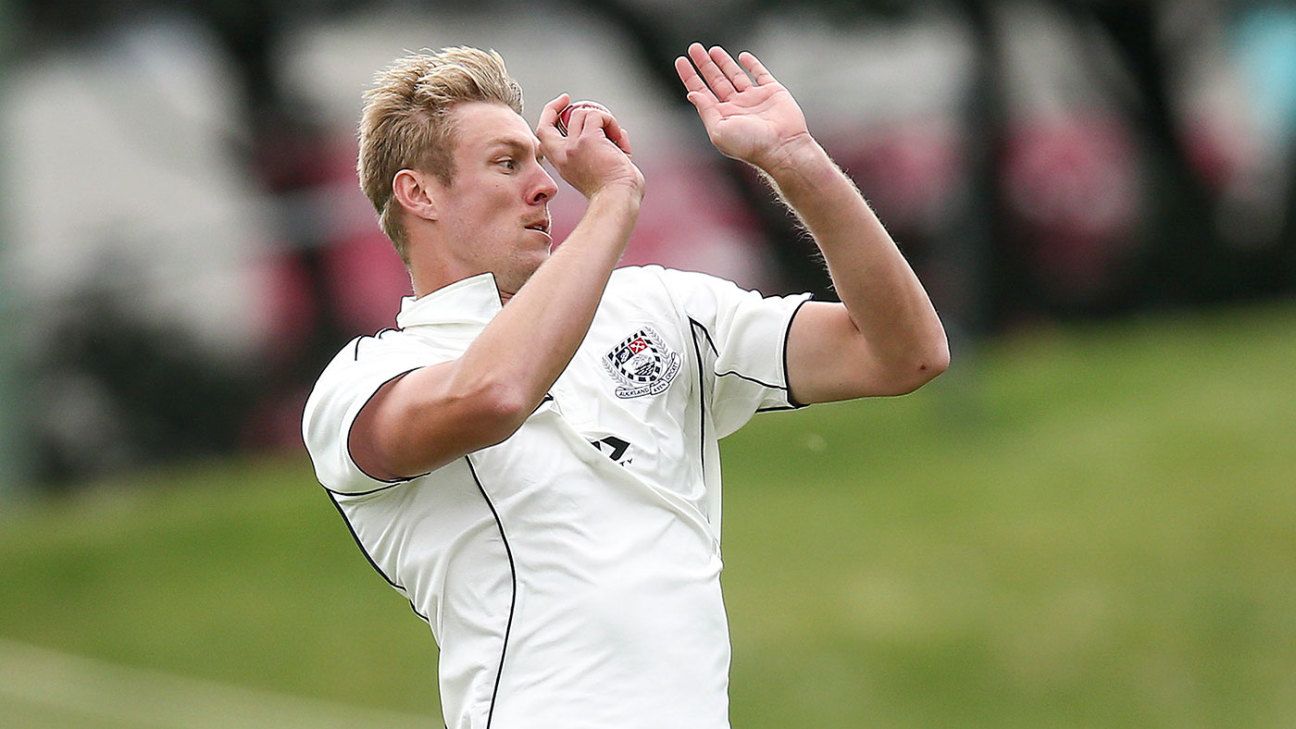 Kyle Jamieson, the uncapped Auckland pace bowler, has been called into New Zealand’s Test squad as a replacement for the injured Lockie Ferguson.

Jamieson, 24, is tall pace bowler and useful lower-order batsman who played for New Zealand A earlier in the season against England.

Although he only has five wickets in three first-class matches this season, his overall record is 72 at 27.93 and his height, with the potential to extract bounce from Australian wickets, has helped earn his call-up.

“It’s an exciting opportunity for Kyle who has impressed in the Plunket Shield domestic four-day competition,” New Zealand coach Gary Stead said. “We’ve also been really encouraged by his progress in the NZC winter camps and his performances for New Zealand A.

“Standing at over two metres tall he obviously gets good bounce and brings something different to our other pace bowlers.”

Jamieson will play in the Super Smash match against Canterbury Kings on Tuesday before heading to Melbourne to link up with the squad on Wednesday to prepare for the Boxing Day Test.

Ferguson, who made his Test debut in Perth, has been ruled out for up to six weeks after suffering a calf strain on the opening day.

“We’re all absolutely gutted for Lockie,” Stead said. “He’d worked really hard to earn his Test debut and to have it cruelly halted by injury was truly unlucky. He’ll return home to begin his recovery with an eye to India’s tour of New Zealand starting in late January.”

On Monday, Stead admitted that they would not be able to find a like-for-like replacement for Ferguson’s pace. “I can’t promise you that I can pluck out guys that can bowl 150kph from New Zealand and bring them over here because I’m not sure we necessarily have them that are fit and available. We’ll consider everything we’ve got but there’s still some positives for us that we can go to Melbourne with and work out how to put Australia under pressure.

New Zealand head to Melbourne with a number of issues to resolve as they aim to bounce back from the 296-run defeat in Perth. Jeet Raval’s poor form continued with scores of 1 and 1 while Mitchell Santner went wicketless through 41 overs and conceded 3.56 runs per over.

They have two days of match practice against a Victoria XI on December 20 and 22 – split over three days with a training day in the middle – before the second Test when those who weren’t part of the XI in Perth will get their chance.

That will likely include Trent Boult who is on track to return for Melbourne after it was decided he was too much of a risk to play in Perth as he recovered from his side strain.

Tom Blundell, who is the reserve wicketkeeper on the tour but also the spare batsman, would be the player to replace Raval if he was dropped – leading to a potential reshuffle of the batting order – while legspinner Todd Astle could put pressure on Santner.