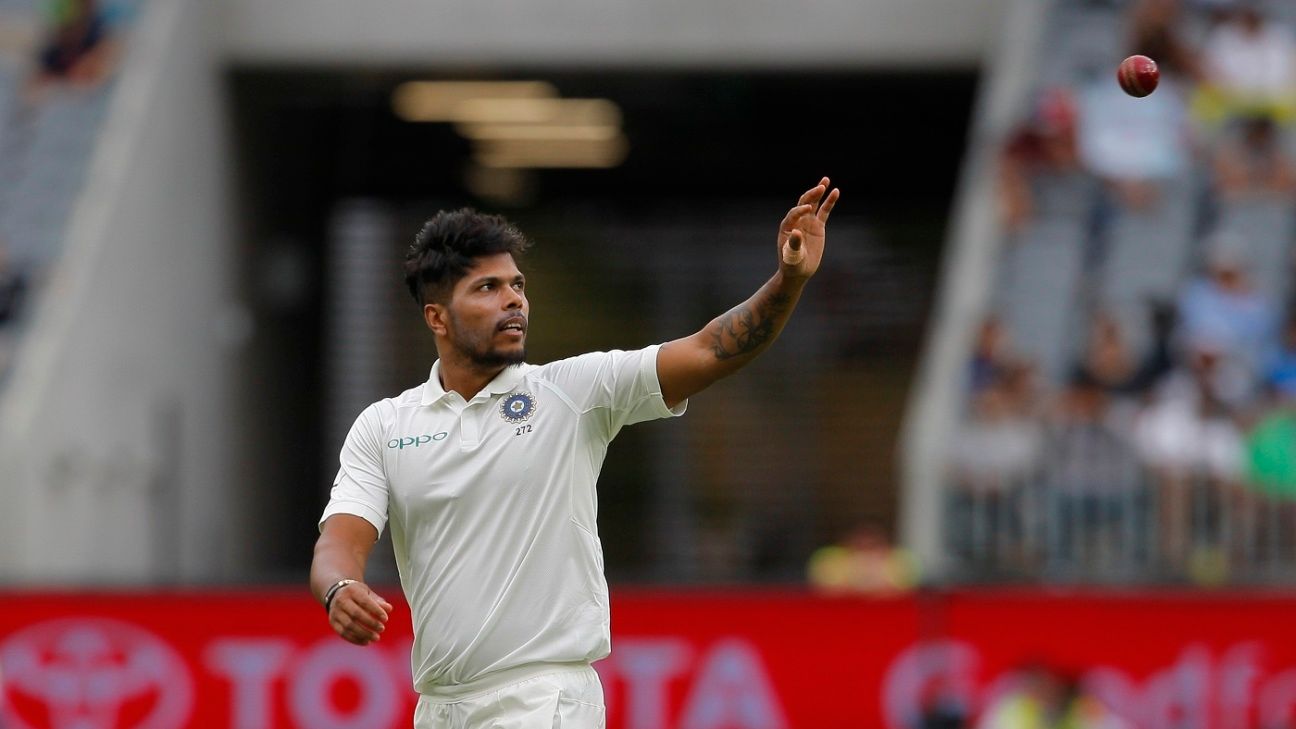 The first day of the Ranji Trophy 2018-19 semi-finals was headlined by Umesh Yadav‘s career-best 7 for 48 and Wasim Jaffer’s record-breaking feat of becoming the only man in the competition’s history to score more than 1000 runs in two separate seasons. While Vidarbha held the advantage against Kerala, Saurashtra had reason to be more satisfied than Karnataka at how the day’s play went.

Umesh took seven wickets in 12 overs to run through Kerala, scuttling them for 106 all out in 28.4 overs. Faiz Fazal then steered Vidarbha’s reply with 75, taking them to 171 for 5 in 45 overs, with the lead standing at 65 runs.

Kerala’s position was ameliorated by late strikes, when Sandeep Warrier accounted for Fazal and Atharva Taide, while Basil Thampi ensured nightwatchman Rajneesh Gurbani’s stay lasted only six balls. Vidarbha were in command at 170 for 2, but lost three wickets in 2.2 overs, including Taide off the last ball before stumps.

Fazal had won the toss and put Kerala in on a spicy pitch at Krishnagiri Stadium in Wayanad. This was the same venue where Kerala had beaten Gujarat in the quarter-finals, with no team scoring more than 185 and seamers accounting for 34 of the 38 wickets that fell to bowlers.

Jaffer had come into the game with 969 runs, and though he was out for 34 to a good catch at slip by KB Arun Karthik, it was enough to take him past 1,000 runs in the season. It was exactly ten years after he had made 1260 runs for Mumbai in 2008-09, and even at almost 41 years old, Jaffer showed that he was well up with modern memes in acing the #10YearChallenge.

On the day though, Vidarbha’s batting was held together by the other veteran in the team. Fazal’s strokeplay on a pitch that offered something to seamers was compact and assured. His wicket did precipitate a mini-collapse, but Vidarbha’s lead in what is potentially a low-scoring game is already significant, and they have the assurance of unleashing Umesh in the second innings.

Kerala’s batsmen had failed to handle Umesh’s pace and hostility in the first innings, and among the top order, only captain Sachin Baby (22) reached double figures. Vishnu Vinod, batting at No. 7, hit out to score 37 not out, adding 25 runs for the last wicket with MD Nidheesh while farming the strike. That stand took Kerala into three figures, but they couldn’t go much beyond that.

Umesh’s latest performance came on the heels of his nine-wicket match haul against Uttarakhand in the quarter-finals, for which he was named the man of the match. He hadn’t been available for Vidarbha in the league stages as he was on national duty.

Rajneesh Gurbani, who shared the new ball with Umesh, took the other three wickets, doubling his tally for what has been a sub-par season so far. Vidarbha didn’t need to give their spinners any overs, despite the pair of Aditya Sarwate (44) and Akshay Wakhare (27) being their leading wicket-takers this season.

Karnataka were left to rue two bad periods of batting that bookended the day. They had been reduced to 30 for 4 after Jaydev Unadkat‘s first spell of 7-3-19-3. Their middle order fashioned a recovery, but from 232 for 5, they collapsed again to end the day on 264 for 9.

Unadkat made light of losing the toss at M Chinnaswamy Stadium in Bangalore, tearing through a star-studded Karnataka top order. His victims were R Samarth, lbw to the third ball of the match, KV Siddharth, Karnataka’s highest run-getter this season, and Mayank Agarwal, India’s newly minted Test opener.

Fellow left-arm pacer Chetan Sakariya, the 20-year-old who had made his debut this season, was rewarded for his tight lines and subtle movement with Karun Nair’s wicket.

However, captain Manish Pandey came out with positive intent and combined with vice-captain Shreyas Gopal to stabilise Karnataka. Pandey had spent the previous two days polishing his attacking game in the nets, and he brought his full repertoire to the middle, driving and flicking with élan. He got to a half-century at quicker than a run-a-ball, and forced Unadkat to pull back from all-out attack to slightly more in-and-out fields.

At the other end, Shreyas was more patient, and showed his batting chops. Pandey looked like he would play the defining knock of the innings, but Unadkat came back after lunch and bent his back to bowl with a bit more pace, getting him to be late on the ball before it thudded into the stumps.

The fifth-wicket pair had put on a century stand but at 136 for 5, Karnataka were not yet safe. However, wicketkeeper-batsman S Sharath, playing only his fourth first-class match, showed great composure to string together another substantial stand with Shreyas. While Pandey had chosen to counterattack, both Sharath and Shreyas were more cautious, and built steadily.

However, they seemed to have decided that among the Saurashtra bowlers, Kamlesh Makvana’s gentle offspin was the one to target, and that eventually led to Karnataka’s undoing. Makvana had leaked runs at a higher rate than Saurashtra might have liked, but when Shreyas had a lapse in concentration on 87, he missed a ball that went with the angle from around the stumps and bowled him.

Karnataka’s lower order seemed intent on following Pandey’s method, but without the accompanying skill to execute it. K Gowtham was out to a casual waft three balls after being reprieved when Unadkat dropped a catch, while both Vinay Kumar and Abhimanyu Mithun were dismissed slogging across the line.

Sharath remained unbeaten on 74, but he now has only No.11 Ronit More for company.