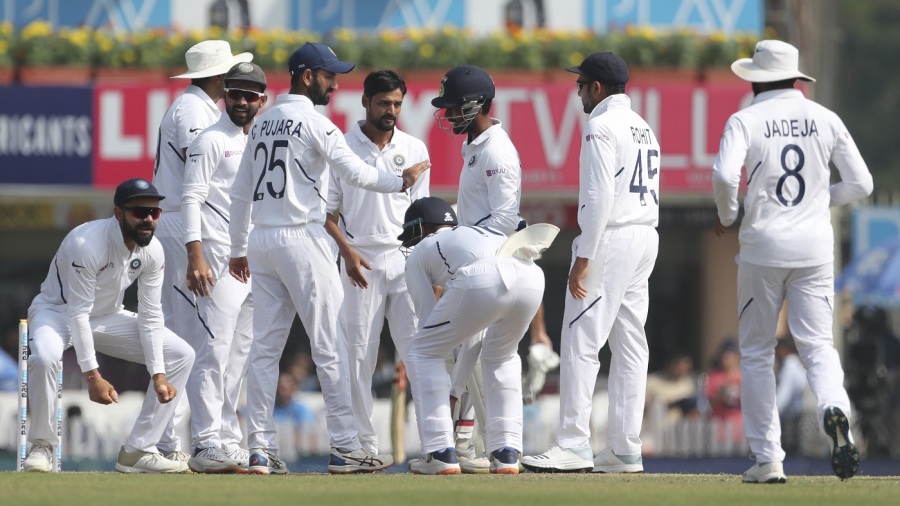 India needed just 12 balls to complete a whitewash over South Africa, winning the third Test inside 15 minutes on the fourth morning. Debutant Shahbaz Nadeem took the last two wickets in two balls to dismiss South Africa for their lowest total of the series and ensure India secured a second successive victory by a margin of more than an innings.

Concussion substitute Theunis de Bruyn was unable to add to his overnight score of 30, his joint-highest on the tour. After a confident, relaxed approach late on the third evening, uncertainty returned and de Bruyn tried to adjust from going forward to defend to hanging back to cut a shorter delivery from Nadeem. He managed only an under-edge, which Saha, back after leaving the field with a thumb injury on the third day, gobbled up.

The next ball, No. 11, Lungi Ngidi, hit hard in the direction of non-striker Anrich Nortje, who was struck on the wrist. The ball rebounded off Nortje and Nadeem was wise to the possibility of the catch. He completed it to end South Africa’s innings and their tour on as unlucky a note as they have had over the last three weeks.

Faf du Plessis lost all three tosses, even when he asked his vice-captain Temba Bavuma to call in his place in Ranchi. As a result, India have enjoyed the best of the batting conditions but that is no explanation for South Africa’s hapless effort. Their seamers have not had the fire they are known for – perhaps as a result of lack of support – their spinners have been ineffective and their batting unable to withstand a sustained Indian attack of pace, aggression and turn.

As a result, the teams stand at opposite ends of records. South Africa last lost consecutive Tests by an innings in 1935-36 against Australia, while India have extended a hot streak at home. Since losing to England in December 2012, India have won 12 Test series (two one-off Tests included) at home. They are also atop the World Test Championship points table, having collected all 120 available in this series.