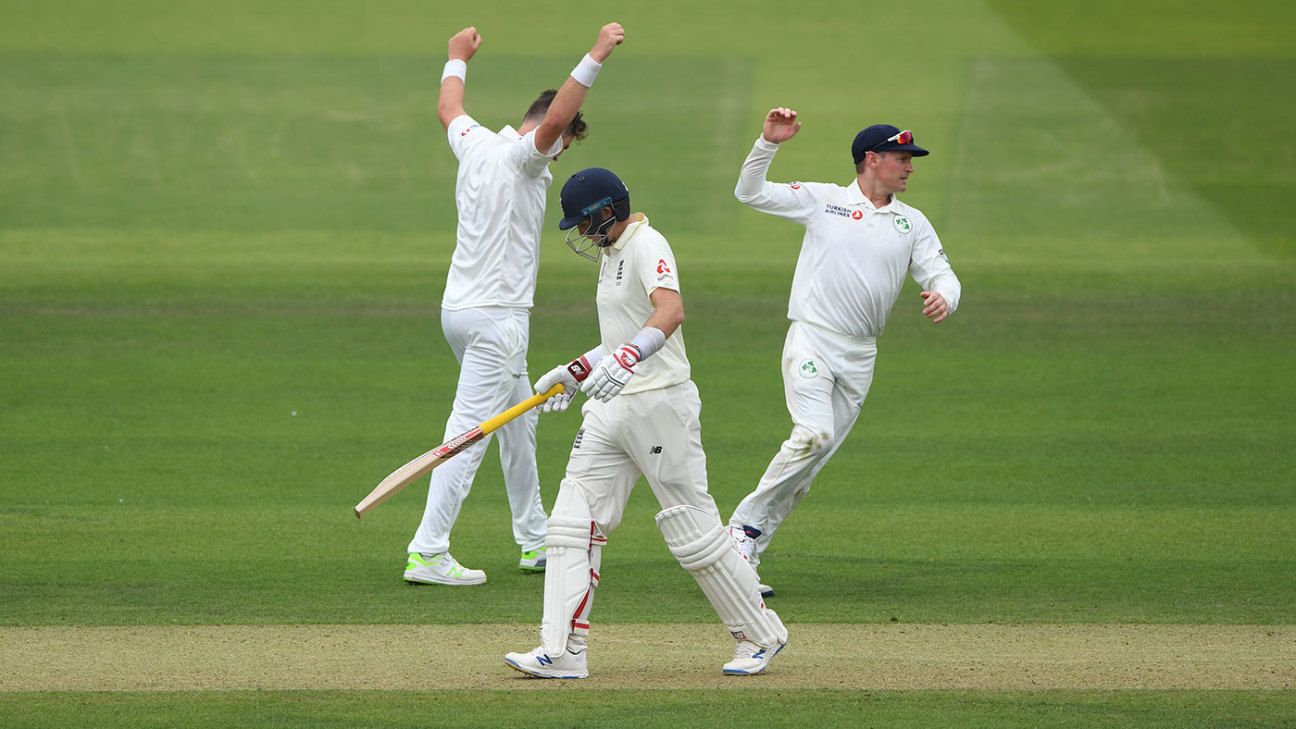 England’s coach, Trevor Bayliss, has questioned his team’s “ruthlessness” when faced with opponents of lesser stature than the likes of India and Australia, after his side saved face with a 143-run win on the third morning of their inaugural Test against Ireland at Lord’s.

Having been bowled out for 85 on the first morning of the match, England turned the tables in dramatic fashion on the third, as Chris Woakes and Stuart Broad rolled aside their opponents in 15.4 overs for 38, the lowest completed Test total since 1932.

However, Bayliss was keenly aware that the comprehensive nature of the finish could not disguise the flimsiness of England’s start, nor the enduring weaknesses in a top-three that is no nearer to being settled with the first Test against Australia looming on August 1.

“When we got knocked over for 85 on day one, that showed what [Ireland] can do,” Bayliss told Sky Sports. “With a bit more experience they’ll give some teams a hurry up.

“With a 180-run lead, we gave ourselves a chance and with the overcast conditions this morning, I think we probably added another 30-40 to the equation. But we had to get off to a good start and those two guys showed the class that we’ve got in these conditions.

“I’d like to have seen this approach in the first two days, especially with our batting,” he added. “The intensity that we went into this morning’s play [was excellent], yet for some reason, over a period of time, we’ve struggled against teams that on paper we should do better against.

“We’ve got no problem getting up for the game when it’s Australia or India, but it’s matches like that where we’ve got to get a grip of ourselves and see where we can get better.”

Bayliss’s assertion is borne out by the team’s recent history, with notable defeats on home soil including a supine loss to Pakistan at Lord’s in the first Test of the 2018 season, as well as West Indies’ thrilling win at Headingley in 2017. But he was keen to add that it wasn’t simply an issue for this current England squad.

“Do we take the foot off? Are we able to get into the mood to actually go out and compete, and be ruthless?”

“It’s been happening for a while, I mean, think about the Netherlands [at the World T20 in 2014] and other matches like that. Do we take the foot off? Are we able to get into the mood to actually go out and compete, and be ruthless?

“I think we showed this morning here how ruthless we can be, but we’ve got to get that into our batting as well.”

There was a significant mitigating factor for England going into this particular contest, however, given that five of the team were involved in the thrilling World Cup final win on this very ground just over a week ago. Jonny Bairstow, who made a pair, was one player who clearly struggled to raise his game, and Bayliss admitted that he for one would have liked longer to savour the greatest achievement of his career.

“I know it’s a Test match that you’re pulling on a shirt for, but to bring yourself back up from that … I certainly think it was a big part to play. There’s no use getting away from it.

“Even the first day, it would have been nice for another week, just to celebrate or savour the moment, but no, you’re straight back into preparing for a Test match. That’s what we’ve got in front of us and so that’s what we’ve got to work on and come to terms with.”

The Ashes build-up will begin in earnest now that Australia have named their 17-man squad for the five-Test series, and England name their own squad for Edgbaston on Saturday morning. Ben Stokes and Jos Buttler are two automatic picks who were rested for this game, while Jofra Archer could come into the reckoning if he comes through his comeback spell for Sussex Sharks in the Blast this evening.

“As I said before, I really don’t think we’ll have any problem getting ourselves up for the Ashes,” said Bayliss. “There’s always a lot of hype around that Ashes series, and we’ve got a few guys to come into the team that have had a rest so we’re looking forward to it.”

James Anderson is another contender for the first Test after training with the squad during the Ireland Test, which he missed due to a minor calf tear sustained in county cricket three weeks ago.

“Jimmy wasn’t quite right for this one but he’s been out here building up some spells and doing his sprints with no problems at all,” said Bayliss. “So I would be very surprised if he’s not right for the first Test.”