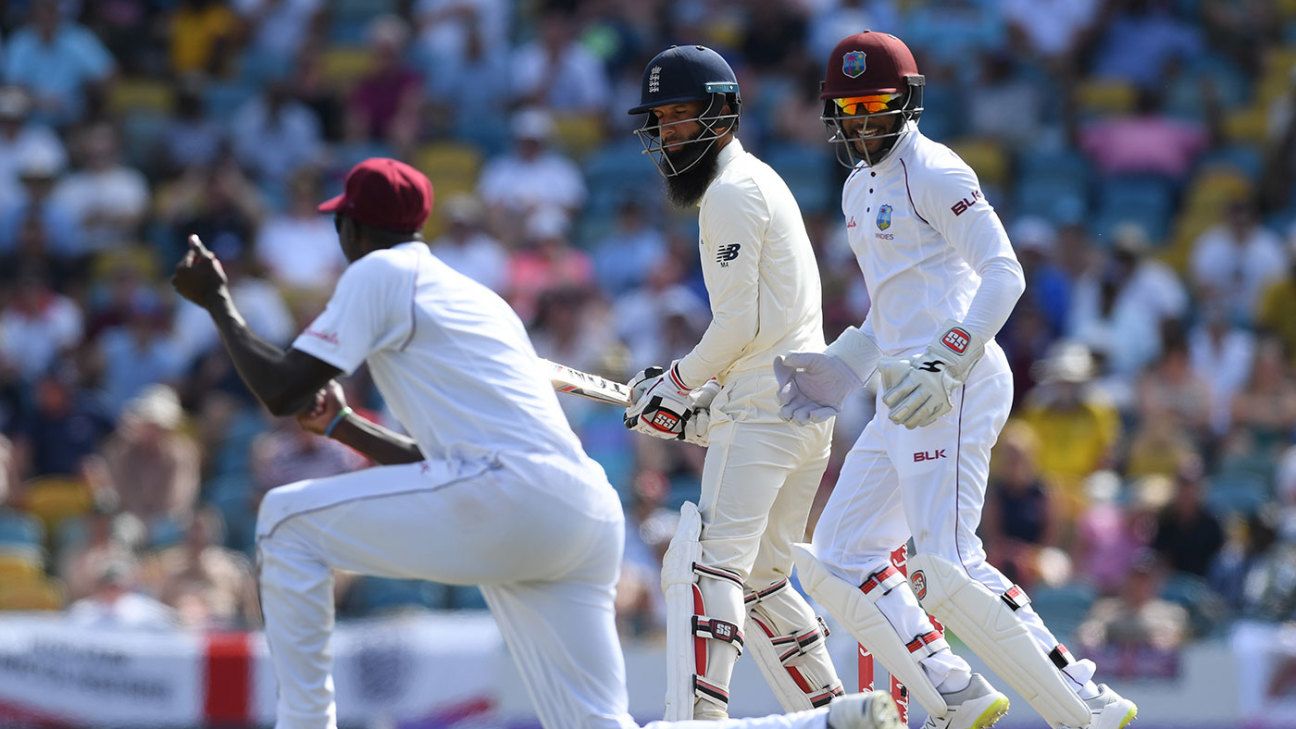 Trevor Bayliss has questioned the “guts and determination” of his England side after their chastening defeat in the first Test in Barbados.

Bayliss, the England coach, described himself as “speechless” after the team’s second batting collapse of the game and suggested some frank words would be exchanged within the squad after a performance that lacked “mental discipline”.

While he defended England’s preparations and selection, arguing that several players had simply not performed and that the batting errors gave the spinners little chance to bowl on a worn surface, he did acknowledge that Sam Curran had endured the “first bad game” of his career and that Keaton Jennings‘ struggles had him worried.

“I think it gets down to a bit of guts and determination to get through those tough periods,” Bayliss said. “It’s not the first time that we’ve succumbed in a short space of time. The boys are in the dressing room hurting and I’d be worried if they weren’t.

“Do they lack mental discipline? Personally I think so. You don’t have to have perfect technique to be able to score runs or take wickets: it’s how you go about using it. On this occasion we’ve certainly been lacking in that department. I’m not sure I can repeat what has been said [in the dressing room].”

Bayliss did acknowledge West Indies’ fine bowling – especially in the first innings when Kemar Roach claimed a five-wicket haul – but felt England should have coped better throughout, especially when Roston Chase was on his way to an eight-wicket haul in the second innings.

“They did bowl well, but every time a team does that we shouldn’t be expecting to get knocked over for 77,” he said. “In the second innings, the guys looked like they were trying, we made good starts but at this level you have to be able to bat longer than that.

“Chase bowled a good line and a good length. He didn’t give us any easy runs to get off strike. He built that pressure up, broke down our techniques on a couple of occasions and there were some poor shots on some occasions. That adds up to eight wickets.

“It’s not the first time this has happened. Every time we lose a wicket it’s the beginning of a collapse. And to be honest, I don’t know how to explain it. There’s nothing that stands out in your preparation or the lead up to the game that is any different to when we win. We have to work out what’s the difference between when we put on a partnership after losing a wicket and losing eight or nine quick ones.”

The decision to omit Stuart Broad and play two spinners has been widely criticised in recent days, but Bayliss believes it was not so much the decisions that were wrong as the performances. He did suggest, however, that Broad had been missed and that his inclusion would be considered ahead of the second Test.

“We made a decision in the belief that the five guys we picked would go out and bowl as well as they can do,” he said. “Unfortunately, on this occasion, they didn’t.

“When we saw the wicket we were going to go with two spinners. Unfortunately, we didn’t bat well enough in the first innings to get through to the fourth or fifth day, where the two spinners could take advantage. And I think they would be disappointed [with their performance]. Chase bowled very few short balls, but we let them off with easy singles so you can’t put pressure on the batsmen.

“It was down to Curran and Broad [for the final seamer]. Our gut feel was Curran as he has done well for us over the last six or seven games. It didn’t work out like that, the young bloke has had his first bad Test in his career. It won’t be his last but he’s a good young player who will learn from it.

“One of his advantages of playing someone like Stuart is that he doesn’t go for too many runs, hopefully picks up some wickets, but gives us control. That stood out in this match, with only [James] Anderson and [Ben] Stokes being able to provide that line-and-length bowling and a bit of pressure on the opposition. We’ll have to revisit that in the next match.”

While Bayliss celebrated the performance of Rory Burns, who made a career-best 84 in the second innings, he accepted Jennings’ struggles against seam bowling were a worry and also suggested that, in a perfect world, he would prefer to see at least one four-day, first-class games ahead of a Test series.

“Burns has shown enough,” he said. “He looks like he’s been here for 20 or 30 Tests, not four. He’s still learning and will still get better.

“We prepared the same way as we did in Sri Lanka. Two two-day games. But we knew what we were going to get in Sri Lanka. Here we were a bit unsure. We were expecting it to be not as dry and go in with four seamers and one spinner.

“Personally I would like to play some first-class games before the series, but you’ve only got four days scheduled, and if you want to give everyone a go, it is difficult. It’s the way of the world these days.”

England fly to Antigua on Monday with the second Test starting there on Thursday.