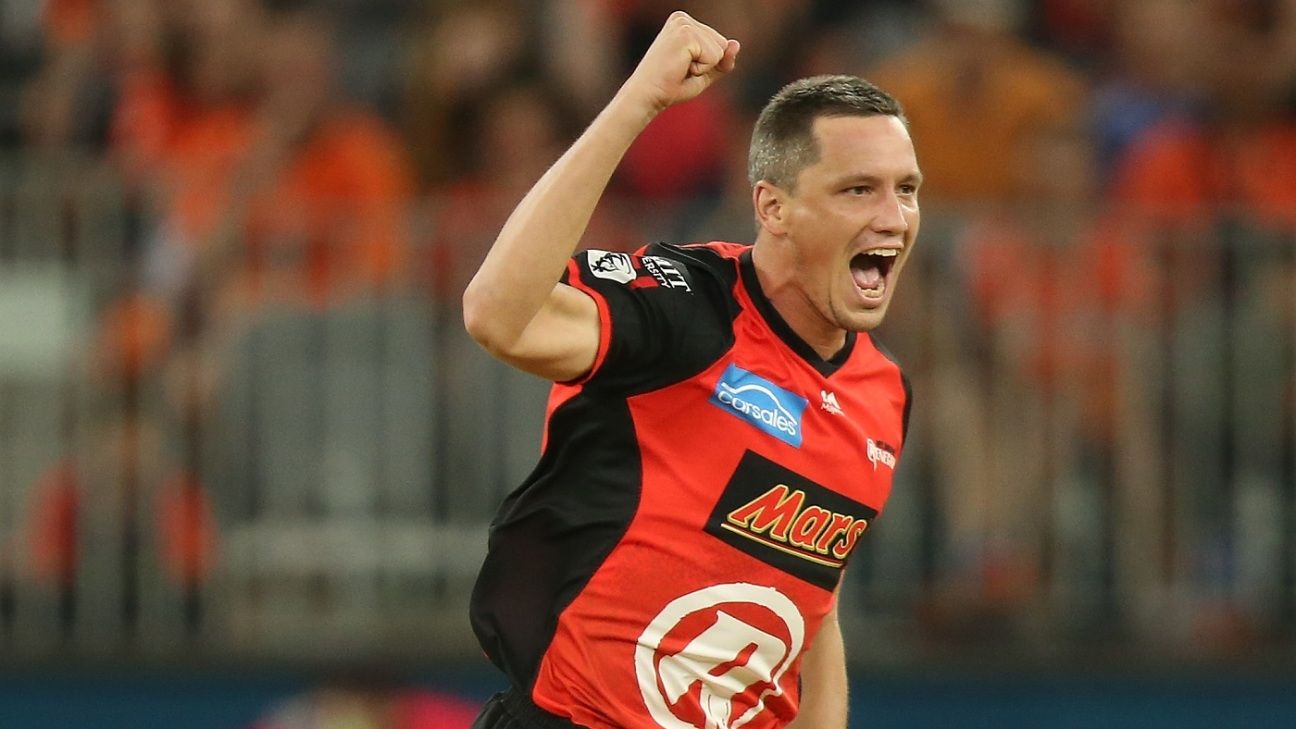 An inspired Melbourne Renegades attack crashed through an abysmal Perth Scorchers batting order to easily defend 5 for 157 and strengthen their bid for a finals berth .

After being sent in, Renegades batted haphazardly against disciplined Scorchers bowling and made a seemingly modest total on the batting-friendly Perth Stadium, a ground where the team chasing had won each of the past five matches this season.

However, unbelievably, it proved more than enough with Renegades routing a toothless Scorchers in 16 overs to win their seventh match and cement a top four spot.

Chris Tremain ran through the top order to finish with astounding figures of 3 for 9 from four overs to ensure more humiliation for bottom-placed Scorchers, who endured mockery from their disgruntled fans in the nadir of a forgettable season for the former BBL powerhouse.

Realising the importance of mustering a sizeable score, Renegades had a clear plan to attack from the get go. The strategy backfired with openers Mackenzie Harvey and Aaron Finch looking out of sorts and unable to find bat on ball.

Harvey, in particular, struggled immensely against Jason Behrendorff’s probing bowling and he continually swung and missed in ham-fisted batting execution. His manic approach seemed to infect a frustrated Finch who similarly couldn’t land a blow.

Eventually, the 18-year-old’s fortunes flipped as he settled and clubbed four boundaries in six balls through the fourth and fifth overs to ignite Renegades. Finch, however, scratched around and survived a Shaun Marsh dropped catch before miscuing an attempted loft to fall for an excruciating 8 off 12 balls.

An unruffled Harvey continued to wildly tee off and he struck the occasional boundary to fuel hope that a gem of a knock could ensue on a ground that has had several recent sparkling batting performances.

It was not to be for the left-hander, whose innings ended in predictable fashion on 38 when he miscued a tonk to mid-off after being duped by an Andrew Tye slower ball.

For all their bluster, Renegades wobbled at 2 for 66 after 10 overs.

After Harvey’s unpredictability, Mohammad Nabi and Sam Harper opted for a more sensible approach. Momentarily, of course, before the frenzy returned. The Afghanistan all-rounder brilliantly cracked a six off Tye only to luckily survive next ball as the quick dropped a return catch.

Renegades lived dangerously but were aided by sloppy Scorchers fielding, most notably when Hilton Cartwright spilled a catch in the outfield to reprieve Harper in the 13th over. The blunders typified Scorchers’ spiralling standards during a lacklustre season but their disciplined bowling was eventually rewarded with the quick wickets of Nabi and Harper to gain a stranglehold over the contest.

Tom Cooper and Cameron White had much work to do but Renegades’ hopes of a late flurry received a major blow when the latter retired hurt on seven after the 17th over due to a hamstring injury.

White’s exit derailed Renegades who only mustered 40 runs off the last five overs against accurate full-pitched bowling to finish with a seemingly under-par total.

Renegades needed early strikes and Tremain obliged with the big wickets of Cameron Bancroft and Shaun Marsh, who both played on, to leave Scorchers reeling at 2 for 6 inside four overs.

Tremain bowled a nagging length and was ably supported by Kane Richardson, the leading wicket taker in the tournament. Richardson joined the party by snaffling a return catch to dismiss Ashton Turner, who endured his third straight single digit failure after an earlier purple patch.

Scorchers were stuck in quicksand and forced to defend as if they were playing in whites. They were a dire 3 for 9 after 5 overs and every painstaking run was mockingly cheered by their angry supporters.

It only got worse for Scorchers when captain Mitchell Marsh holed out leaving the home side at a seemingly implausible 4 for 12 after six overs. Tremain bowled unchanged and his heroics forced some Scorchers fans to scramble for the exit.

Apart from several lusty blows from emerging batsman Nick Hobson, Scorchers offered almost no resistance as their meek batsmen outdid each other in tame dismissals. Dan Christian ran through the lower order with four wickets to continue the carnage.

When Tye fell in the 12th over, Scorchers were 8 for 52 and five runs short of the lowest ever BBL total. Tailender Matthew Kelly (18 not out) ensured they avoided that ignominy but Scorchers still capitulated for their second lowest BBL score.

The recriminations are set to start for Scorchers who will miss finals for the first time.