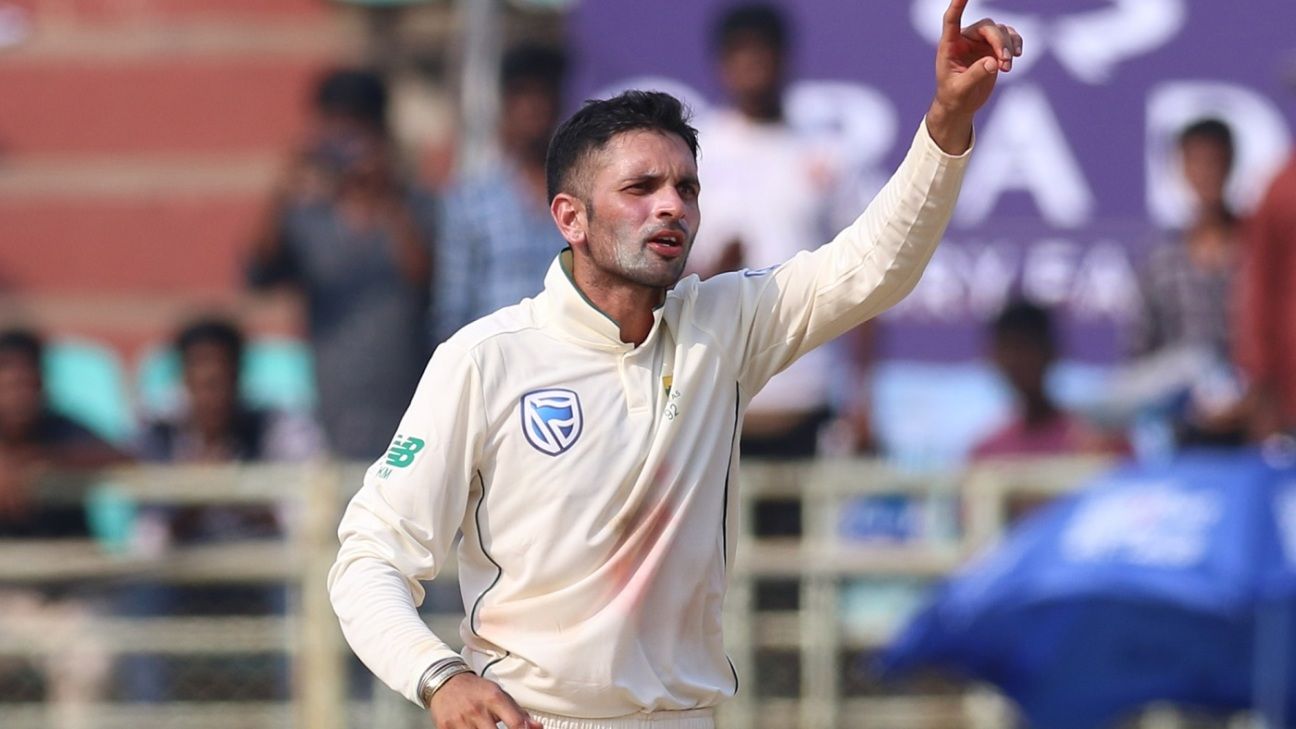 If Keshav Maharaj thought touring India would offer him ideal conditions to show off his skills, the first two days of the Test series would have made him think again. South Africa’s first-choice spinner had to bowl 34 overs before he saw any success and has described the Visakhapatnam surface as one of the most challenging he has played on, especially because he operated on it before it began to offer any assistance.

“It’s probably one of the toughest surfaces I’ve bowled on in terms of it being a lot slower and not biting as much. You got slow turn but the ball didn’t really kick off the wicket. When the ball got softer the odd one straightened or there was a little bit of bite, but the cracks have been opening because of the heat. So there is a little bit of assistance coming through now as opposed to when we started. I’d say it’s about a day-and-a-half [before that started happening],” Maharaj said.

India enjoyed prime batting conditions in the first five sessions of the match, when the pitch offered neither pace nor sharp turn and its sluggish nature tested the skills of South Africa’s spinners. Unusually, the visitors went in with three, none of whom put massive revs on the ball, so they had to rely on other methods, such as variations in speed, to try and make something happen. “With the wicket not spinning, you try and beat the batsmen through the air and go slower and try get some assistance, or maybe the odd faster ball might grip,” Maharaj said.

For 82 overs, nothing worked. That Dane Piedt and Senuran Muthusamy lacked discipline didn’t help but Maharaj was quick to defend his team-mates and transfer credit to India’s openers. “If someone comes down the wicket and hits you, it’s not a bad ball. If you’re getting hit from the crease or cut then it’s a different story. Mayank (Agarwal) played superbly well and so did Rohit (Sharma). Everything they wanted to do paid off. I wouldn’t say they bowled badly. Sen is a batting allrounder, so I think his contribution in his first taste of international cricket went pretty well for him in tough conditions,” he said.

Finally, after Rohit hit Maharaj for back-to-back boundaries which including stepping out of his crease to drive him for four, Maharaj tossed one up to invite the charge and beat Rohit with turn and flight to allow Quinton de Kock to complete the stumping. By then, India already had 317 on the board and South Africa’s bowlers knew it would be “difficult to come back from that”. They took six more wickets which Maharaj said “gave us a bit of positivity,” but understand that the thrust of the fight may be over.

The best batting conditions are gone, the best bowling conditions can now be enjoyed by India’s spinners. South Africa could bowl again, but their deficit of 463 runs and the threat India’s spinners have already posed to their inexperienced line-up make it unlikely they will be toiling for any reason other than to allow India to set a winning target on a deteriorating surface. Maharaj admitted the toss may have played a decisive factor but also acknowledged South Africa were not as good as they should have been. “The toss does play a role because you want the best conditions for the spinners to bowl in, but we could have been a little bit better at times. But the toss is a large factor in the outcome of the game,” he said.

Arguments will be made over team selection and whether South Africa should have gone for a more incisive quick given that they have two others, Lungi Ngidi and Anrich Nortje, in their ranks. But perhaps a more critical look needs to be cast on what’s going on behind the scenes. In the post-World-Cup overhaul, spin bowling consultant Claude Henderson was among those whose contract was not renewed, despite the work he put in with Maharaj, which included long hours in the nets.

The impact of that was evident over the last two days, where Maharaj carried the bulk of the bowling load, and tied his end as best he could. “I love bowling. Whether the outcome is five wickets or two wickets, I love bowling. As long as the feel [of the ball] in my hand is good then I’m on the right track. Long spells is something I’ve always wanted to do. It’s the long hours that I train alone that has given me the match fitness to bowl them,” Maharaj said.

South Africa’s position aside, Maharaj may yet go on to have a memorable tour in India. He is three wickets away from 100 Test scalps which will equal Nicky Boje’s career, and is six wickets adrift of overtaking Paul Harris’ haul of 103. Once he gets there only Paul Adams (134 wickets) and Hugh Tayfield (170) will be ahead of him as South Africa’s most successful Test spinners. Given Maharaj’s age, 29 years old, his attention to his fitness and the amount of Test cricket to be played in the next few years, it’s entirely possible he will become South Africa’s leading long-format spinner. But whether he will be able to dominate in India is yet to be seen.