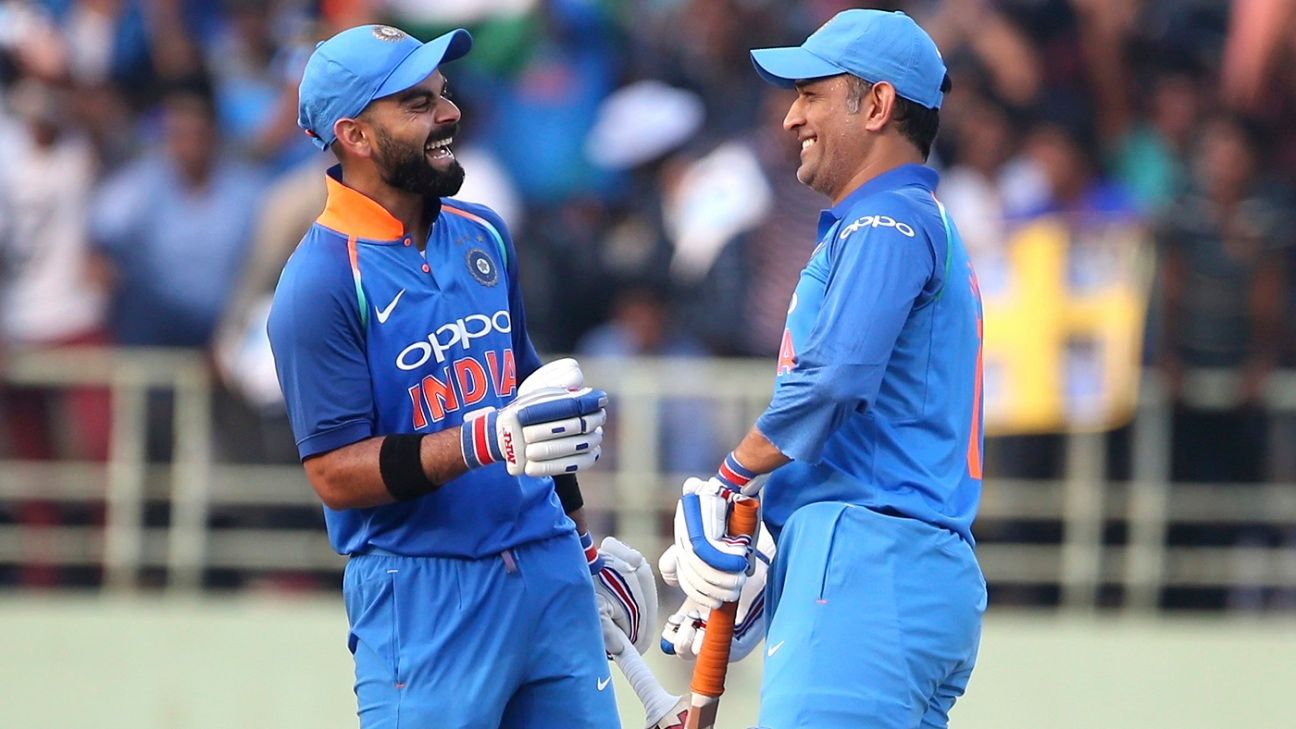 He came in with equation reading 139 off 118 deliveries. He took it to the last over. He hit the first ball for a six, and made sure India won the game. MS Dhoni was in his element in Adelaide and Virat Kohli was highly appreciative of him.

“There’s no doubt that he should be a part of this team. When you haven’t played so much cricket [recently], you take a bit of time to get back into the groove, and tonight was an MS classic,” Kohli said at the post-match presentation. “He takes the game till the end, but only knows what’s going on in his mind, he calculates the game so well. He backs himself to hit those big shots when required. So hats off to him.”

India had gone 0-1 down in the three-match series and that loss had put a harsh spotlight on Dhoni’s role in ODIs. He made 51 off 96 deliveries – although there were mitigating circumstances, namely he had walked in with his team 3 for 4 chasing 289.

There was a better foundation for India in Adelaide. Kohli was still in the middle too, and would complete his 39th century to take India within 57 runs of the target. But when the Indian captain was caught at deep midwicket in the 44th over, Australia sensed an opportunity. Dhoni too seemed to be struggling in the heat, needing the physio to come out and attend to him between overs. The pressure was on. And then it dissipated as Dinesh Karthik came out and started scoring at nearly two runs a ball.

“Dinesh as well, just taking a little bit of pressure off him at that stage when he [Dhoni] was tired,” Kohli said. “I think Dinesh came in and showed the right kind of intent and put those quick runs on the board that were required. But yes, MS was as composed as ever. He kept me calm in there as well. He thought I was going to get over-excited and play a bad shot, but that’s how we bat well together. We try and help each other, and tonight was special for both of us.”

Dhoni went back to the dressing room unbeaten on 55 off 54 balls with two sixes. “He’s been pretty solid this series,” Karthik said at the press conference. “It was the kind of innings he’s played over and over again. So it was great to watch him bat and finish off an innings, and we know he can absorb pressure and release it back to the opponents when the time is right. That’s always been his strength and today you saw the perfect example of that.”

The only blip in the script was the sight of Dhoni crumpled up in a heap, gasping in the middle as he fought off the effects of a very hot day.

“Everybody tried to have as many liquids as you could but still he was going through a lot of cramps,” Karthik said. “The fact that he was batting for a long, long time didn’t help either. And with me being there, I run a lot. I run twos and threes and was pushing him. So it was that much more harder for him. I think next we play together, he’ll prefer somebody else there who can hit a boundary or two. It was good, batting with him after a long time, it felt good.”

Karthik was pleased with his own hand in the victory as well. His 25 off 14 balls was made at a time when there was public scrutiny over his place, considering he is keeping Kedar Jadhav out. India’s team management trusted him to keep playing the finisher, though, and he was happy to repay the faith.

“Obviously, I’ve practised it, worked on it and it’s a skill that I think is very important. It’s a skill where you need to have a cool head. A lot of experience helps. This is probably one of the hardest skills in the game,” Karthik said. “To finish a match and be on the winning side is something that is great to be a part of. Obviously, batting in the Powerplay and batting upfront is a different kind of challenge. Batting in the middle, the ball is reversing a bit and the bowlers are sure of what lengths to bowl. A lot of different challenges. It feels good to come out and execute the plans that you have and put pressure on the opponent.”

Was there any tension at the end though? When India still needed seven runs off the last over? “No. Dhoni and I knew that we were just one hit away,” Karthik said. “Even bowlers knew they were under pressure, he has to execute six great balls to stop us from scoring, one mistake he made and we would have pounced on him, and the first ball he [Dhoni] hit a beautiful six which kind of sealed the deal.”