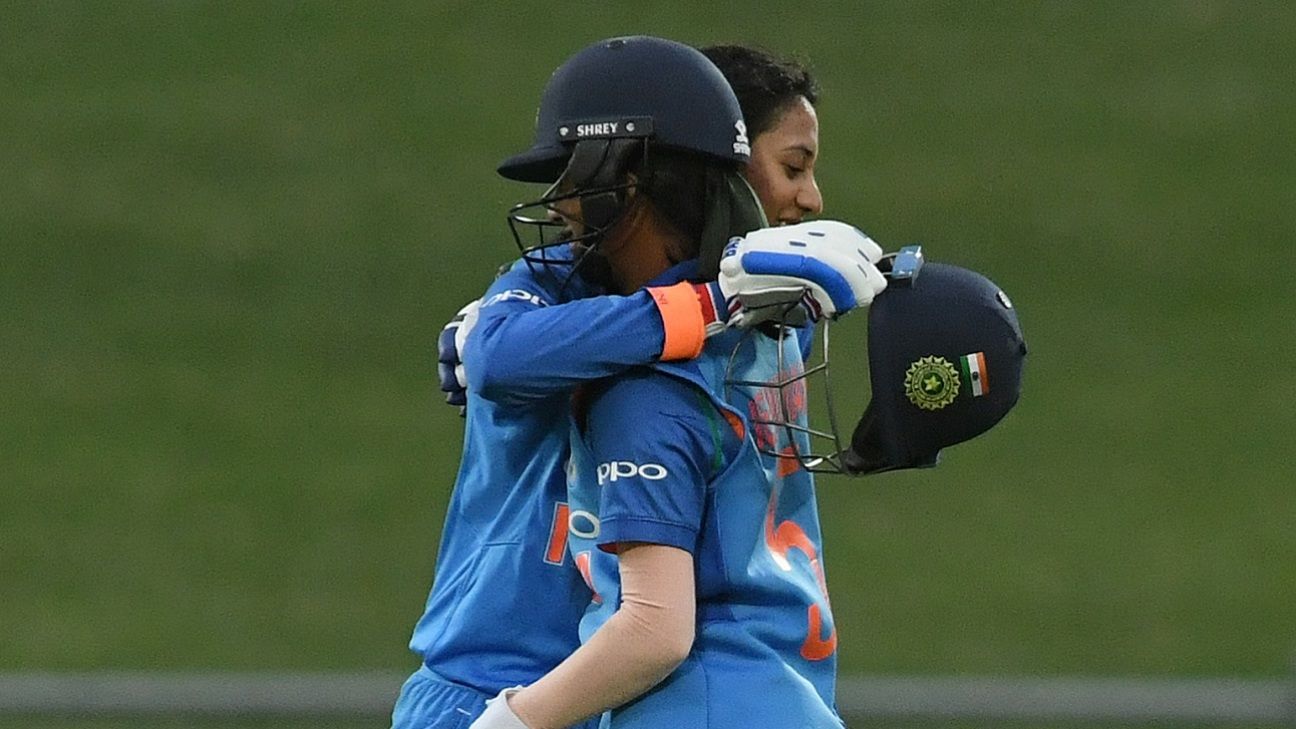 “Really happy,” Mandhana said after the game. “I have a thing of getting out in the 70s and 80s, so I had to talk to myself, ‘don’t hit any rash shots, don’t hit any lofted shots, just play in singles and doubles’. I’m really happy with that aspect. I was able to stick in and guide the team through. Again, if I’d scored three runs I would have been a lot happier (she was dismissed with India three runs short of their target).”

With only 192 to chase, Mandhana (105) and Jemimah Rodrigues (81*) knocked all but two runs of the target by themselves in a mammoth opening stand. They started cautiously, playing out the first two overs from Lea Tahuhu and Hannah Rowe before hitting a four each in Tahuhu’s second over to get going.

“The wicket was really good to bat on, and initially we just played according to the merit of the ball. We just had to react to the ball, because they had good pacers,” Mandhana said. “The plan was to see how the new ball was doing. This was the first time we were batting in New Zealand, and we didn’t really know … we watched a bit of the men’s match and also how the first innings went. So we decided to just keep it simple, play according to the merit of the ball.”

For New Zealand, it was a matter of starting well but then letting the momentum slip. Bates (36) and Devine (28) put on 61 runs for the first wicket but once that was broken, they struggled to put enough partnerships together. This despite captain Amy Satterthwaite (31), Amelie Kerr (28) and Rowe (25) getting good starts.

“Suzie and Sophie batted pretty well at the top, and built a bit of a platform, but we didn’t get a big enough partnership at any stage of the innings (after that)” Satterthwaite said. “A lot of people got starts, 20s and 30s, and didn’t kick on. There were a lot of dot balls and we created our own pressure, tried to release it with a shot that’s not really on.”

Then, during the Indian innings, just as there was a period where the bowlers were building pressure, a boundary would follow, almost on cue.

“Certainly with the ball, at times we weren’t patient enough,” Satterthwaite said. “We didn’t create enough pressure and didn’t string enough dot balls together, and always released it with a four ball. So you’re chasing your tail constantly and that makes it pretty tough.”