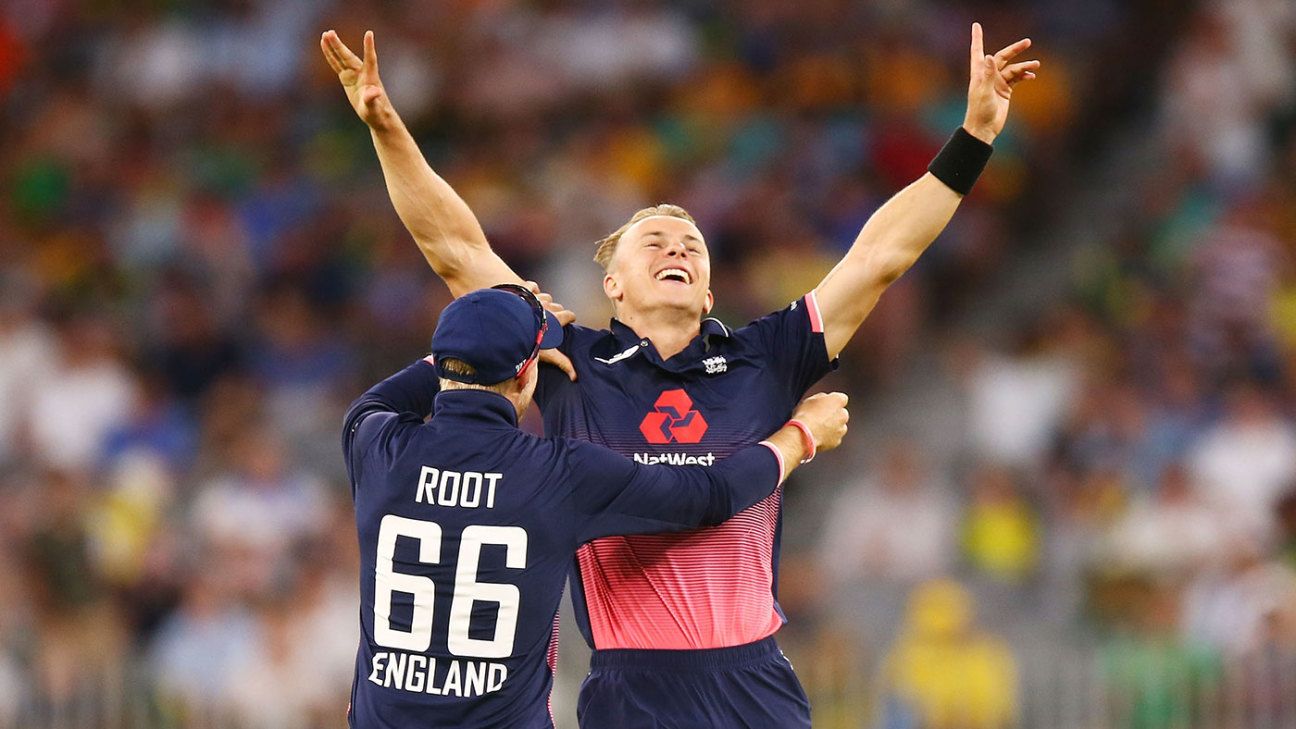 Jade Dernbach, Surrey’s white-ball captain, says that Tom Curran deserves to make the cut for England’s preliminary World Cup squad, which is due to be announced at Lord’s on Wednesday, purely on the strength of his nerveless attributes as a death bowler.

Curran, 24, is one of a host of fast bowlers competing for the final handful of places in England’s squad, alongside the likes of Jofra Archer – who is set to make his international debut in the ODIs against Ireland and Pakistan next month after completing his residency qualification – and Chris Jordan, whose eye-catching display in the T20Is in the Caribbean last month were a timely reminder of his talents.

But in Dernbach’s opinion, when it comes to the very specific role of closing out a contest in the final overs of a tense run-chase, none of England’s potential selections currently compares to Curran – a player who has learned and refined many of the skills that earned Dernbach his own England call-up eight years ago.

“If there was anyone in the country I’d throw the ball to, I’d back Tom Curran every day of the week,” Dernbach told ESPNcricinfo. “He has an unbelievable skill, he practises unbelievably hard, but the most important thing is he wants the ball.”

Curran’s opportunities to date have been limited to 13 ODIs and 10 T20Is since his debut in 2017, and he missed the whole of England’s white-ball campaign last summer due to a side strain.

However, he showed what he can do in his third ODI at Perth last year, when he closed out a tense 12-run win over Australia with career-best figures of 5 for 35, including the final two wickets of the match for one run in the space of eight balls.

“In those situations, when it comes down to the crunch moment, that’s when you really find out about someone, their true character shines through,” Dernbach said. “And as a young man, to want the ball and do it on the big stage, that says a lot for me.

“You may not be successful every day, and that’s the nature of being a death bowler, but to keep putting your hand up, practising your skill, and doing it as he has done for Surrey time and time again, there’s no reason he couldn’t do it on the biggest stage, and I know he would love to.

“If you offered him the opportunity now to bowl the last over of the World Cup final, to defend seven or eight, he’ll do it for you. I’d put my mortgage on it.”

The issue of English death bowling came back into the spotlight in the IPL on Thursday, when Ben Stokes endured another chastening night – failing to defend 18 off the final over for Rajasthan Royals against Chennai Super Kings, in scenes reminiscent of Carlos Brathwaite’s heist in the final of the World T20 in Kolkata three years ago.

Dernbach can sympathise. His England career came to an abrupt end after the team’s elimination from the 2014 World T20 in Bangladesh, but looking back now at the age of 33, he recognises that the ability to bowl a range of variations – including his fabled back-of-the-hand slower ball – counts for little unless it is backed up by tactical nous.

“You see younger and younger guys coming into the game with these skills at their disposal now,” Dernbach said. “But it’s a 360-degree game now, in terms of where batters are capable of hitting you, so just having that skill is not enough. It’s knowing what fields to have when bowling that ball. How to trick batters into thinking you’re going to deliver a certain ball, but then offer something different. That’s where the game has developed, it’s not just the case of having a number of slower balls, it’s when and how to use them.”

Or when to not use them at all, as another of England’s fringe candidates, Jordan, demonstrated during his recent matchwinning displays against West Indies. Jordan’s figures of 4 for 6 in the second ODI in St Kitts were notable for the manner in which he attacked the outside edge to exploit helpful conditions, and were a reminder that sometimes old-school methods still have their place in the modern game.

“The most difficult ball in the game has always been the one that’s hitting the top of off hard,” Dernbach said. “But I think we probably veered away from that, thinking different balls were the way forward, because we got wrapped up in the unpredictability side of it.

“We’ve almost come full circle to think that, if that’s your best ball, then let’s wait for the batter to be able to take it away from you, and then we’ve still got something else to fall back on in slower balls and yorkers.”

Dernbach recognises that his own international days are long gone, but has no doubt that he is a better bowler now than he was as the raw talent who made his debut as a virtual unknown against Sri Lanka in June 2011.

“It’s something I’ve learnt over a long period of time, having probably been a bit mixed with my thoughts and emotions at the end of my mark in the past,” he said. “It’s been about getting a balance between what people expect me to bowl, and really trusting in what I think the situation requires me to bowl.

“That’s the key to experience. At the end of your mark you’ll get a feel for what you think you should do, so you set the field appropriately, and then put 100 percent backing into the ball you want to deliver.

“If you nail your yorker but the batsman gets down and laps you over the keeper, there’s nothing you can do. It may look disappointing, but that’s just the way it goes, because sometimes someone is allowed to be better than you. That’s the key to sports.

“But if you know that you’ve practised enough, and the moment comes to bring out that back-of-the-hand slower ball, and deliver it on fifth stump to turn away from someone trying to hit me over midwicket, if I am comfortable with it, there’s no reason I can’t do my part as well as I can in the last over.

“It’s the same with the yorker. It comes down to confidence, and what you believe you can deliver. If you’ve practise thousands and thousands of times, then it’s not going to be about any lack of ability. Sometimes the situation gets the better of us, but if you can remain clear and back that skill, nine times out of ten you’ll probably nail it.”

And it is for such reasons why Dernbach is cautious about endorsing the selection of Archer, a cricketer of massive potential, but who has played just 14 List A games in the course of his career. Instead he believes England would be better off sticking to players who have already been tried and tested in the 50-over format.

“England are talking about selecting Archer, but his only real success has come in 20-over cricket. I’d say we’ve got a ready-made Jofra Archer in Chris Jordan. He’s had plenty of international experience, he’s been around the world in the T20 leagues and played 50-over as well, as has Tom.

“Jordan, for me, is a fantastic bowler, a guy who has all the skills, has been around the world and been successful. I played with him in the T10 before Christmas, and his ability to deliver the exact skill necessary was quite remarkable. He’s the epitome of what you want your one-day bowler to be. He’s got pace, he will trouble you if he needs to go short, he’s a great example of that.

“World Cups are pressurised situations in their own right, let alone bringing people in who haven’t played a lot of that version. You want people who’ve been involved in 50-over cricket before, and have earned the right to bring the World Cup home.”