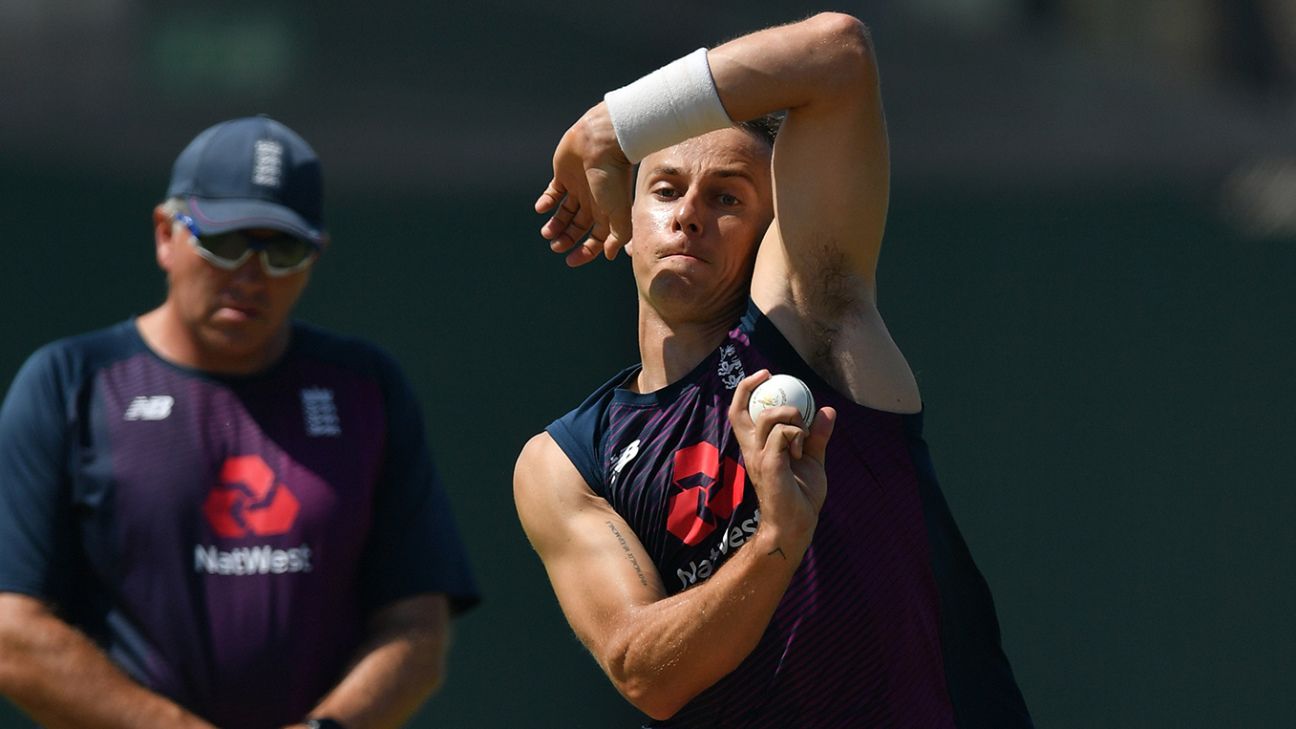 Tom Curran has admitted that an enforced break from cricket over the last few weeks has come as a “shock to the system”, but said he was trying to use the time off to refresh mentally, hopeful that the game will be able to resume later this summer in the wake of the coronavirus outbreak that has brought life to a standstill in much of the world.

Curran had been expecting to be at the IPL with Rajasthan Royals right now – his new team’s opening fixture, originally scheduled for April 2, would have brought him into competition with younger brother Sam – but those plans have long been shelved. After a productive winter, in which he played in 10 out of 11 England white-ball internationals, as well as appearing in the Mzansi Super League and burnishing his allrounder credentials with Big Bash winners Sydney Sixers, he has found it odd to have time on his hands.

“It is strange to be honest,” he said. “I think we play so much now, you’re just used to rolling on from one thing to the next. Sport is a big part of our lives but in the grand scheme of things it is not the end of the world for us compared to some of the other things going on around the world.

“For the last four or five years, it has been cricket non-stop, all the year round. I think for everyone to be stuck indoors and not playing is a shock to the system, everyone is missing it. I’ve had to mute [England media manager Danny Reuben] on Instagram because he keeps posting how much he is missing it. It is a shock to all of us, players, people involved in the sport, fans and lovers of the sport. It is a shock to the system but what we’re going through is nothing in the grand scheme of things.”

With Tom having recently moved out of the place he shared with his brothers, a Zoom call arranged by the ECB offered a chance to catch-up – Sam asking, with perhaps a touch of irony, to hear more about Tom’s new dog, which has been making recent appearances on Instagram. Becoming a pet owner, as well as playing games online and trying to practice his bowling action while out running – “pretty village stuff,” Tom said – has helped fill time away from the usual routine of training and playing.

“I’m using it as a time to get refreshed mentally,” he said. “It is a terrible time of course, but we seldom get a break like this in what would be the middle of our summer. We’re trying to stay positive so that when we do come back we’re in a good position to kick on mentally and physically for the years to come.”

Sam has put some of his energy into launching a fundraiser for the NHS, while both of the Surrey Currans – the third brother, Ben, plays for Northamptonshire – have been involved in a scheme to call the club’s older members and offer support and conversation over the phone.

“It was a lovely little initiative that someone at Surrey organised and got the players and staff involved,” Tom said. “The capped players called about ten members each, the majority of them more elderly who have been associated with the club for a while. There was a small Surrey trivia quiz, where we asked them three questions about the club and if they got all three correct there was a little prize sent out.

“It was just a lovely little thing. It was really refreshing to chat and see how life was going for them and just try to put a smile on some people’s faces who are involved in our community at Surrey in these troubling times.”

Sam added: “It was quite a cool thing to do because we don’t usually speak to the members much and we focused on the older generation because the club felt they were the most vulnerable and it was really special. A lot of the older members had a lot of opinions on the games we were missing and what formats we should focus on and things like that. It was quite entertaining.”

No prizes for guessing which of the formats might have been referred to less favourably (Surrey were one of the frontline rebels against the ECB launching a new competition) but whether the Hundred is played at all this year remains a point of debate. Tom and Sam were both drafted by the Oval Invincibles last year, yet the potential for games to forced behind closed doors or difficulties bringing in overseas signings could see the whole tournament delayed.

“It just depends on when we start playing cricket,” Tom said. “It’s just such a hard one to forecast because let’s say we start playing mid-June and things in Australia carry on a lot longer and finish in October, which means the overseas players wouldn’t be able to come. I don’t know the right answer and until we start picking and choosing it’s so hard to predict.”