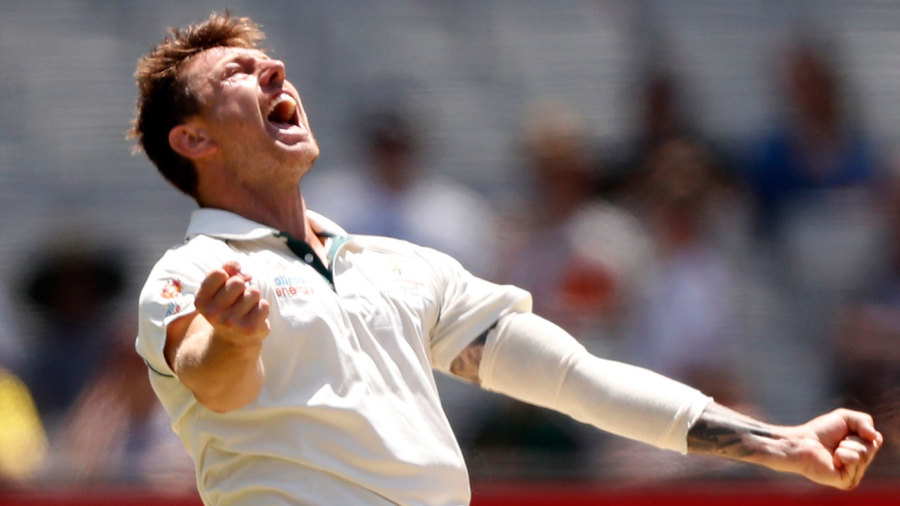 James Pattinson left New Zealand in tatters and heading for a crushing four-day defeat at the MCG after bursting through the top order including the key duo of Kane Williamson and Ross Taylor for a combined tally of two runs between them.

After being set 488, New Zealand plummeted to lunch on 3 for 38 with the chance of taking the match into the fifth a distant prospect.

Pattinson, who returned to the side as Josh Hazlewood’s replacement, struck with his fourth delivery when he drew Tom Latham into driving at a wide delivery, the edge well taken by Tim Paine diving to his left. It broke an opening stand that had shown small signs of promise, but even bigger prize followed a few moments later after a switch of ends following the successful first over.

Williamson, who played a poor shot in the first innings to fall for 9, was given lbw when a delivery nipped back to catch him on the crease. The captain called for the DRS, as he had to do, and the replays showed it was clipped leg stump by, dare it be said, the barest of margins. It was the type of decision that can often go against the side under the pump.

While there may have been an element of bad fortune in Williamson’s dismissal, Taylor’s downfall was self-inflicted as he dragged on an under edge as he attempted to cut Pattinson to give the quick his third wicket in nine deliveries

Australia could have had their first opening in the opening over when Mitchell Starc swung one back into Tom Blundell which would have taken leg stump and been overturned on DRS had Paine reviewed. A freshly-shaven Blundell made a punchy start to his innings, launching a pull over wide mid-on against Pat Cummins, and working Starc off his pads when he strayed a touch too straight

Australia batted on for 10 overs without every really getting out of second gear, the declaration coming when Travis Head was bowled round his legs by Neil Wagner for his seventh wicket of the match. That was all a prelude to the contest really starting again and it remained one-way traffic.