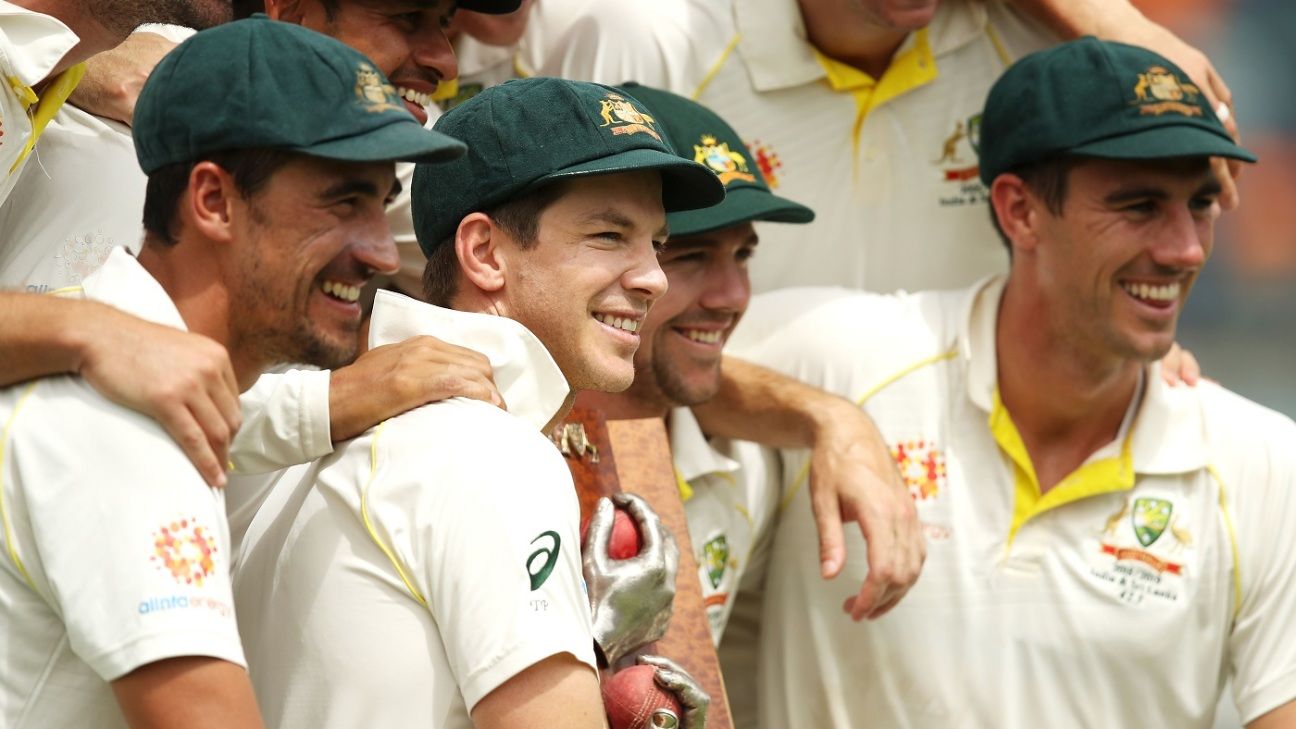 Australia Test captain Tim Paine has revealed that he has been thinking about this year’s Ashes series for at least six months, and believes that the dominant 2-0 series win over a decidedly modest Sri Lanka side has helped the hosts crystallise a formula that can help them return them to the pinnacle of world cricket.

The two victories – by an innings in Brisbane and then by 366 runs in Canberra – were achieved against opponents who seemed completely unprepared for the challenge of Australian conditions in general and pace bowling in particular. Paine nonetheless was unequivocal in asserting that the unity central to those displays – bowlers hunting as a pack, batsmen building partnerships and, finally, centuries – provided the blueprint for success against stronger opponents on higher-profile days.

“Honestly, we were quite disappointed with the way we played against India,” Paine said. “I think the differences between the two series were that our ability to bowl as a group against India wasn’t quite there at times. Whether that’s because Virat (Kohli) and (Cheteshwar) Pujara were more patient than us and forced our bowlers out of their plans, but I thought we turned it around in this series with a real focus on bowling for each other and playing cricket as a team.

“Obviously you need individual performances to win moments, but overall the stronger our team can be and the more that we play for each other – this series, or Sri Lanka and the way that we played in these last two Test matches – I think we can beat anyone in the world. The focus was on us playing as a team, so we’ve got to keep driving that home.”

PAINE ON SMITH AND WARNER

There will be no assignment of greater import than the Ashes in England later in 2019 where the Australians, bolstered by the possible returns of the banned Steven Smith and David Warner, will seek to become the first team clad in the baggy green to win the urn in the UK since 2001. Paine, who made his debut in England in 2010, albeit against Pakistan, admitted he had been thinking and dreaming of the series for quite some time, and also had a fair few names in mind for the likely 17-man squad.

“About six months ago … I’ve been dreaming about it actually,” Paine said when asked when he would start thinking about the Ashes. “I’m happy now that we’ve got this out of the way, I can put everything into it because every Australian cricketer can’t wait to go and play an Ashes series and particularly in England.

“It’s something that I’ve certainly dreamed of as a kid. I didn’t think I’d be going over as the captain, but in the back of my mind I’ve been thinking about it, I’ve been watching England, keeping a really close eye on them, I can’t wait to get over there.

“I’ve got a fair idea what it (the squad) might look like. But I’m not a selector, so I get asked my input. But I think they would have a pretty good picture of what it would look like. What we’ve seen over this summer is that we’ve now started to build a squad with plenty of depth. So there’s probably anywhere between 16 and 20 players now that we think are in the mix, a really good place to be.”

First among these names will undoubtedly be paceman Pat Cummins, who reaped an eye-popping 14 wickets at 7.78 against Sri Lanka despite operating at first change behind Mitchell Starc and Jhye Richardson. “He’s got to be pretty close to it, isn’t he?” Paine said in response to whether Cummins was now among the world’s very best.

“The difference with Pat and those guys is he doesn’t take the new ball. So he bowls at times when the ball’s not doing as much and the wicket’s a bit flatter. I think his ability to get it done in all conditions – whether it’s moving around or not – is second to none.

“I felt as the summer went on he got better and better the more he bowled, it felt quicker and more accurate. He’d be the fastest Australian bowler to 90 wickets. That probably says he’s right up there.”

Two other names clearly in Paine’s squad are Smith and Warner, who he identified as critical parts of an Ashes-winning team. The end of the Sri Lanka series marked the end of a stretch of nine Test matches that the former captain and vice-captain have missed through suspension, and there can be little doubt as to how warmly they will be received when they return to the fold.

“I think everyone has to a degree got to earn their stripes, I think those two have plenty of runs in the bank,” Paine said. “I see us going to the Ashes and them having a huge part in us winning the series. That’s how I see how important they are to this team. We know how good they are. Hopefully once their bans are up they’ll be welcomed back and they’ll win Test matches like they did before.”