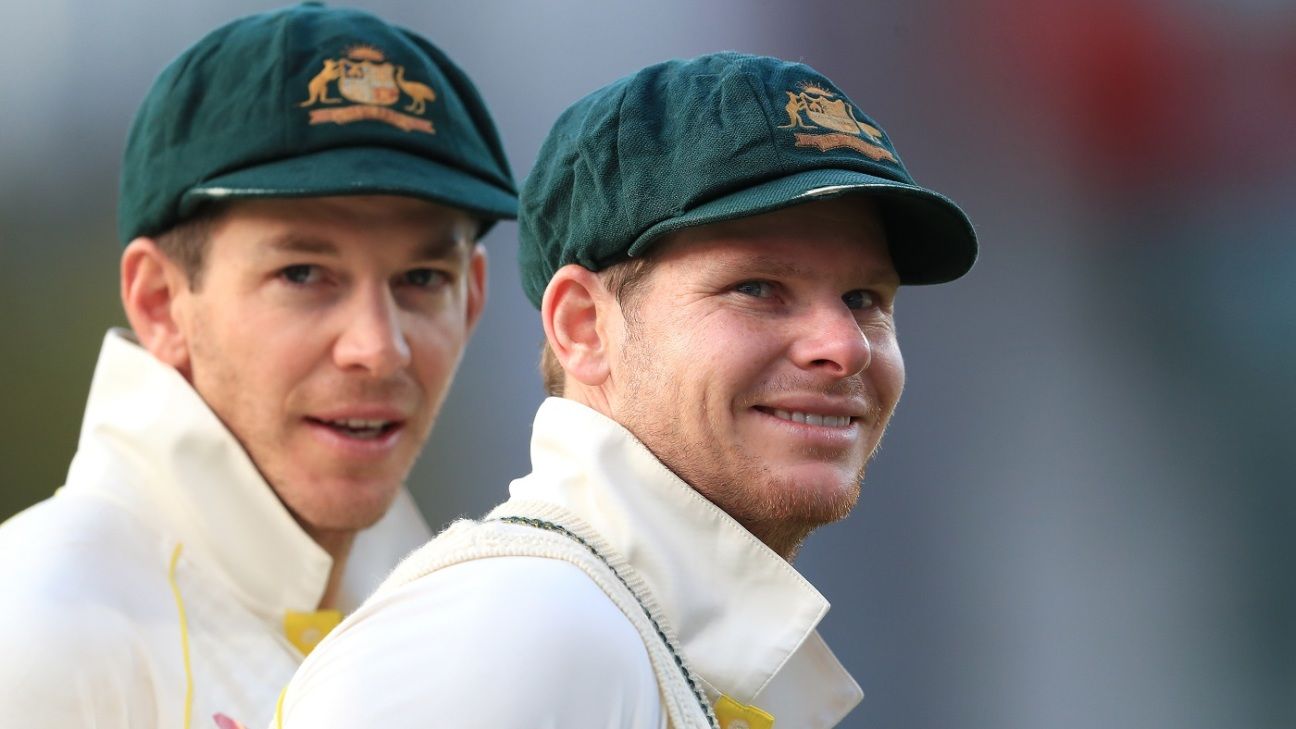 Australia captain Tim Paine believes the return of Steven Smith and David Warner to Test cricket down under will give the hosts the horsepower they need to mount a genuine challenge for the World Test Championship title. Paine said that the series against Pakistan would give them a chance to reel in some of India’s enormous lead at the top of the table.

Under the idiosyncrasies of the inaugural Test championship, a two-Test series offers the possibility of collecting 120 points for a 2-0 sweep, a result that would vault Australia from fifth to second position on the WTC table behind Virat Kohli’s side.

Apart from that, Joe Burns has returned at the top alongside Warner, while Marnus Labuschagne‘s formative last summer reaped strong rewards in England, a trend that Paine is looking to continue.

“Hopefully a huge one with runs,” Paine said of the impact he was looking for from Smith and Warner. “We’ve enjoyed having them back last winter and certainly Steve has added a hell of a lot of runs, a hell of a lot of know-how and experience and Dave is the same. I touched on it a lot last summer, it’s really critical that our young players spend a lot of time with those guys, learn from them as much as we can and try and emulate the things they’ve been doing.

“We would like to support Steve a lot more this summer, Davey is certainly one of those guys who is really keen to get amongst the runs and just watching him the last few days in the nets, he looks as good as I’ve seen him for a long time, which is a great sign for us.”

Warner gave a strong sign that he would rebound from a horrific Ashes series by sculpting a high-quality century for NSW against Queensland at the Gabba early in the season, and Paine said he had seen further evidence to back that up this week.

“He hasn’t lost any of his appetite to score runs, he’s still working as hard as I’ve ever seen him work,” Paine said. “Just watching him in the last few days, he just looks like he is back to his best, the ball is making a different sound off his bat again, he looks like he is in great positions most of the time when he’s batting in the nets.

“You can’t afford to be playing a Test match at the end of a Test series as a dead rubber, there’s no such thing, and our team has got our eyes set firmly on that Test final in June 2021. That’s one of our team’s goals”

“But the best and most pleasing thing about Davey was during the whole Ashes when he was probably in the worst form of his career, he didn’t change one bit. A lot of players would. He has got unbelievable self-belief, which is his main strength. Obviously, he didn’t put the runs on the board he would like, but I still know he believes and we believe he is a world-class opener, he has played nearly 80 Tests and averages 45, so I’d be expecting that to be back up over 50 by the end of this series.”

Coach Justin Langer has noted the boom-and-bust tendencies of the Test team under Paine’s leadership, only once – against Sri Lanka last summer – putting two successive wins together in the same series. It will be essential for Australia to do so to contend for the championship.

“That’s the key to being a good Test team, being able to do it consistently,” Paine said. “We touched on it this week as well with the importance of the Test championship. You can’t afford to be playing a Test match at the end of a Test series as a dead rubber, there’s no such thing, and our team has got our eyes set firmly on that Test final in June 2021. That’s one of our team’s goals.

“It just adds to the importance of every Test match, every Test series, so for us to be playing consistent cricket both home and away and in all types of conditions, is something we’re certainly striving for. I think through that difficult period last year what we did was get some guys some exposure to Test cricket that probably wouldn’t have got it beforehand. So we’ve started to build some real depth around our squad. With depth, I think that’s when you start to get that consistency because guys know they have to perform to keep their spot.

“We’ve had some really good players in this series that have been left out of the Australian Test squad, which is disappointing for them, but really good for our side in the fact we’re building that depth and with the depth, we’re hoping we’ll get that consistency of performance.”

As for Labuschagne and Burns, Paine reckoned their Queensland experience would provide a useful head start to the top order. “At the moment, in the near future, the No. 3 spot is his to nail down,” Paine said of Labuschagne. “I thought he did a wonderful job in England, and he is someone we think can certainly fill that hole at No. 3. He’s had a terrific start to his Test career, he has got good technique, good character, good temperament, and a good No. 3 needs all those. We’re certainly excited by what he can do in that role.

“We know what we’re going to get from Burnsy, he is a hardened first-class opening batter and he bats at the Gabba a lot where it’s hard to score runs, particularly at the top of the order. He knows his game really well, he is really confident in it, and I think he has been picked now when he has come into the prime of his career and he is playing as well as he ever had. Similar to a Matthew Wade, we’ve just picked those guys now at the right time and they’ll make the most of this opportunity.”