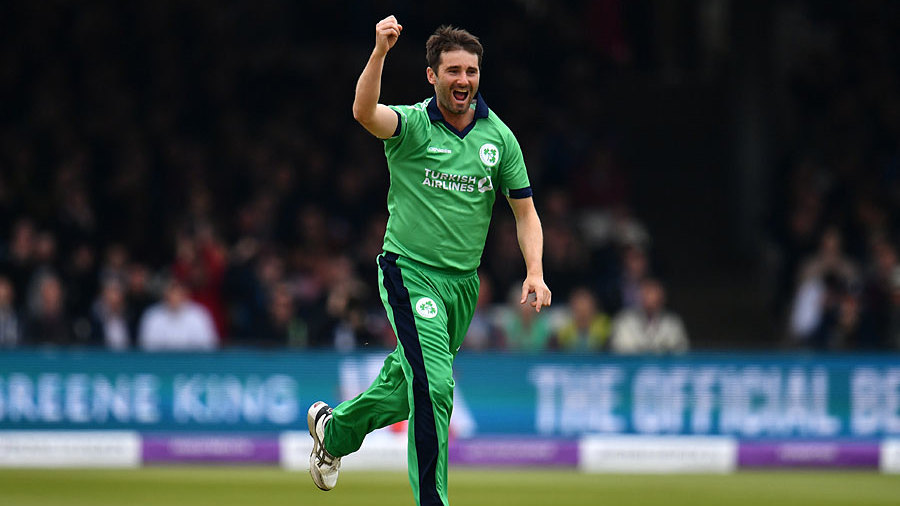 Tim Murtagh‘s first international five-for helped Ireland to a five-run win over Zimbabwe in the second ODI in Belfast. After Ireland had been made to scrap for their total of 242 for 9, Murtagh, a month shy of his 38th birthday and playing his 57th ODI for Ireland, tore through Zimbabwe’s top order with the new ball, returned to nip out the vital wicket of Sean Williams for 58, and then closed out the game with a nerveless over at the death to finish with 5 for 21. Zimbabwe’s pursuit ended at 237 for 9 despite Ryan Burl keeping them in the hunt with a maiden ODI fifty.

Murtagh’s second ball of the game was clubbed to the midwicket fence by Zimbabwe captain Hamilton Masakadza, but the visitors managed just one further boundary off him as the veteran seamer perfectly exploited helpful conditions at the Civil Service Cricket Club ground in Stormont. Before his first over was up, he had exacted his revenge by removing Masakadza’s off bail, but it was in his third over that he really dented Zimbabwe’s chase.

Solomon Mire poked at one outside off to be caught behind for 4, and then came the key dismissal of Brendan Taylor, pinned in front of his stumps for a golden duck. Williams survived the hat-trick ball, but from the depths of 14 for 3 it seemed Zimbabwe’s chase had been terminally derailed.

But Williams had Craig Ervine, fresh from a century in the last match and in the midst of a rich vein of form, for company. Ervine took the lead in a 56-run stand before he was caught behind for 43 off Shane Getkate‘s medium pace, wicketkeeper Lorcan Tucker quick to make amends for an earlier lapse, having dropped a regulation chance in Getkate’s previous over.

With the match in the balance, Sikandar Raza tried to seize the initiative with a counter-attacking innings, thumping 15 runs off Getkate in the 21st over to push Zimbabwe’s score beyond 100. But one shot too many meant his effort was to be a cameo rather than a match-turning knock, and when he fell to a catch in the deep for 31, when the required rate was less than five an over, parity was restored.

Williams whipped Andy McBrine to the midwicket fence to bring up an unusually patient 76-ball fifty, but as the match wore on a pitch that had worn a greenish tinge all day started to become increasingly two-paced, and it was quickly apparent that Zimbabwe’s chase would not be a straightforward one.

Murtagh returned, probing with a wicket-to-wicket line as the odd delivery kept low while others kicked off the track, and soon had a pulling Williams well caught by Andy Balbirnie, close in at midwicket. Richmond Mutumbami was undone by a delivery from Getkate that shot through low, kissing the edge, and Zimbabwe were wobbling 160 for 7 with a further 83 needed, and only the tail to keep Burl company.

He found an able ally in Donald Tiripano, and together they inched Zimbabwe back into contention. With Tiripano battling cramps, the pair took the requirement down to 15 from 12 before Ireland captain William Porterfield turned back to the talismanic Murtagh to bowl his final over, and the penultimate over of the innings. After three dots and a single, Tiripano played over the top of one to be bowled for 33, giving Murtagh his fifth wicket and snapping a 69-run stand.

Zimbabwe needed 14 from the final over, but Mark Adair held his nerve and targeted the blockhole to deny them. Burl reached his fifty, but was run out attempting an unlikely second run off the fifth delivery, leaving Tendai Chatara needing to hit a six just to level the scores. He managed just a single to long-off, and Ireland wrapped up a victory that also gave them an unassailable 2-0 series lead.

Murtagh’s wickets helped his team to defend a total that had been built around fifties from Paul Stirling, James McCollum and Tucker. Ireland’s was an innings of two halves: the top order dominated the opening salvo, and Zimbabwe’s frontline seamers struggled to make any inroads despite their captain’s decision to bowl first on a track that had a healthy covering of grass.

Eleven boundaries – including three in a row for Stirling off Chatara – flowed in the first Powerplay, and both Irish openers raised their fifties in the same over, the 23rd. But Masakadza then turned to Mire’s rarely-used seamers, heralding a Zimbabwean fightback in the second half of the innings, before Zimbabwe’s spinners put the squeeze on at the death.

Mire picked up 4 for 43, while Masakadza deployed Raza and Williams to put the brakes on Ireland’s charge at the death. The two spinners took a combined 4 for 71 from 16 overs to hold Ireland back, but Murtagh’s career-best bowling effort ensured that the hosts’ total was just enough to secure the win, and the series.