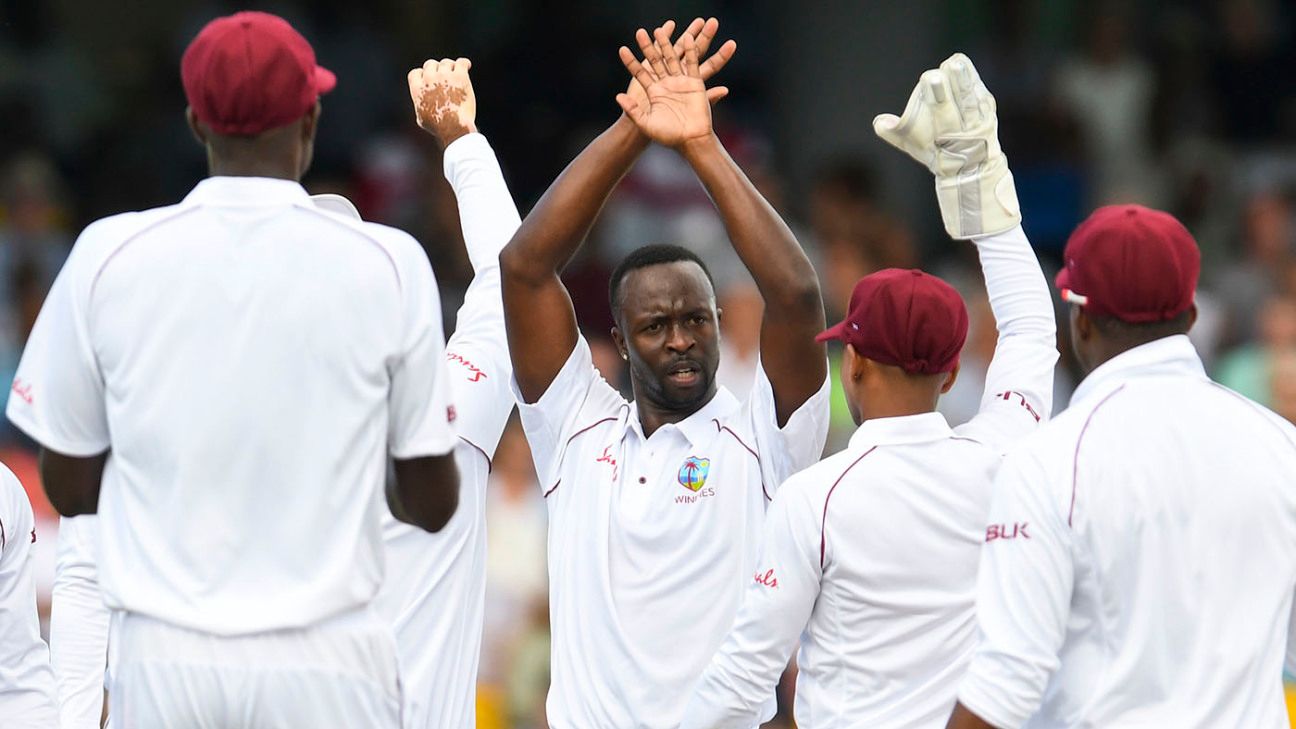 Just for a moment on Thursday afternoon, we could have been back in the 1970s or 80s.

Just for a moment, with Kemar Roach doing a more than passable impression of Malcolm Marshall – and yes, that IS high praise, but spells of five wickets for four runs in 27 balls tend to deserve such praise – and Jason Holder doing a passable impression of Joel Garner, this West Indies attack looked as skilful, intimidating and entertaining as their illustrious predecessors. As a quartet, they generated pace, gained movement and bowled with almost relentless discipline.

It’s true there were a couple of poor shots from England batsmen. Keaton Jennings, for example, was drawn into a loose drive, while Moeen Ali’s top-edge jab at a short ball – the first delivery he faced – sustained a worrying decline in his personal form. Since the start of the Ashes (November 2017) Moeen is averaging 18.36 in 11-and-a-half Tests with a top score of 50. Since the Sri Lanka tour, he’s averaging 11.14 in three-and-a-half Tests. If he maintains that sort of trajectory, it will not be long until Jack Leach is keeping him out of the side by virtue of his superior batting.

But this was, in general, a case more of fine bowling than feeble batting. West Indies’ seamers bowled with pace and skill in extracting life and movement from the surface that was largely been absent when England bowled in the first innings of the match. And if one or two batsmen will feel they could have done a bit better – both Rory Burns and Jonny Bairstow appeared to be beaten for pace by the skiddy Roach – two or three more could be forgiven for scratching their heads and wondering what more they could have done.

Take the wicket of Ben Foakes, for example. He was drawn into a forward defensive stroke by a fine delivery from Alzarri Joseph that was angled in but left him and took the edge on the way to the keeper. Or Sam Curran, who received the sort of fast, rearing short ball from Shannon Gabriel that would have pleased Patrick Patterson (had he bowled it; nobody would want to face it). Or Joe Root, who was set up by a series of balls leaving him, and pinned by one that nipped back and trapped him leg before. These were, by any standards, fine deliveries.

Still, to lose 10 wickets for 54 runs in 21.3 overs will rightly cause concern in the England camp. And while they may feel, with some justification, that they have had the worst of the pitch – 17 wickets fell in the day and there is every sign that it will deteriorate further – they would do well to reflect on their fortune with tosses in recent times. You cannot reap the rewards of eight successive toss wins, and not accept the challenge of losing the ninth.

“Sam Curran received the sort of fast, rearing short ball from Shannon Gabriel that would have pleased Patrick Patterson”

So, just as the 51 all out in Jamaica (2009) raised questions for England, so should this. Was their warm-up schedule – just two, two-day games in an environment lacking any intensity – adequate? Or did it underestimate their opposition? There were two first-class games (and a two-day game) ahead of the Tests on the Ashes tour, after all.

Equally, what role did selection play here? While it is, in many ways, counter-intuitive to highlight the selection of the bowlers after a batting collapse, all the evidence so far suggests that Stuart Broad or Chris Woakes, with their extra height and pace, might have extracted more from the pitch than Curran. Also, England picked two spinners. They claimed one for 115 in 29 overs in West Indies’ first innings and, though Moeen started to enjoy conditions in the second, Adil Rashid was not asked to bowl. West Indies, by contrast, picked only the allrounder Roston Chase, and did not deliver a single over of spin at any stage of England’s.

And where are England’s fast bowlers? While one of West Indies’ opening bowlers (Gabriel) generated pace of 92.4 mph at one stage (Joseph also hit 89.6 mph), one of England’s (Curran) had an average pace of 78.9. They have different skills, of course. But Gabriel also generates movement and the fact remains that, on many surfaces, the harder bowlers hit the pitch, the more chance they have of getting something out of it. West Indies had three seamers with average speeds higher than any of England’s seamers. As was the case in Australia, this enduring England weakness has been exposed.

So we may reflect on this as something of a reality check for England. They had reached No. 2 in the world rankings thanks to some fine cricket, certainly. But several old weaknesses remain – not least the inability to nail down a top order and the propensity to collapse (they lost nine wickets in a session here, but have lost 10 in a session three times since October 2016). Perhaps winning at home against India and away against a modest Sri Lanka has flattered them a little.

So, a grim day for England. It was noticeable, though, that as Roach led the West Indies team off the pitch, the England supporters who make up the majority of the crowd here gave them a sustained standing ovation. They knew they had seen something special.

Yes, this performance will sting English cricket for a while. But anyone who loves cricket will be able to rejoice in the excellent performance of a West Indies side who were dismissed, by some, as no-hopers (“very ordinary, average cricketers,” according to Geoff Boycott) in the lead-up to the series.

In Joseph and Shai Hope, and Shimron Hetmyer, Kraigg Brathwaite and Oshane Thomas, they have the nucleus of a side who could lead them to many better days in the future. That, for us all, would be something to celebrate.