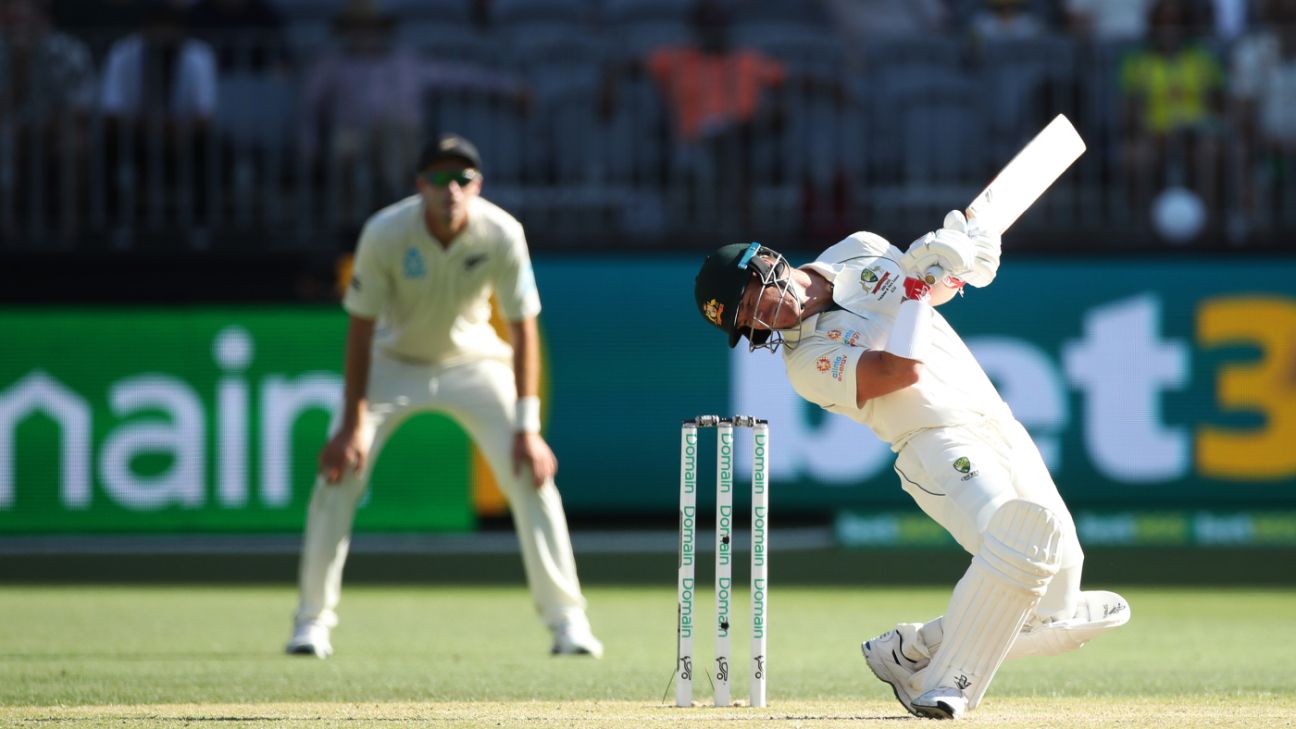 New Zealand’s eyes are still firmly fixed on trying to save, or even win, the opening Test in Perth but if, as is very likely, Australia come out on top they may have won a few little battles late on the third day.

Their short-ball tactics, led by Neil Wagner and this time implemented by Tim Southee as well, are so well telegraphed yet still continue to reap considerable reward. “The five men out on the pull gave it away,” Joe Burns said with a smile.

Burns was one of the five Australia second-innings wickets to fall to the short delivery, when he gloved Southee to gully, the odd one out being Tim Paine who was cleaned up second ball.

Significantly, the plan worked for the second time in the match against Steven Smith, who picked out deep square leg having been given a working over by Wagner which included a painful blow on the gloves. It meant that for the first time in his career, Smith had gone three Tests without a half-century.

David Warner miscued a pull to mid-on, Marnus Labuschagne picked out midwicket (although not until he had scored another fifty and become the first batsman to 1000 Test runs this year) and Travis Head flicked straight to leg gully, his second poor dismissal of the match. Those moments are unlikely to have much bearing on this game, but they are little markers for the Tests to come.

“First and foremost it’s to try and get through this match but we have wait and see what the wicket’s like in Melbourne,” Ross Taylor said. “It’s definitely a tactic we’ve used in New Zealand to good effect and Neil has been a fantastic exponent of doing that. The match-ups throughout this whole series, not just this match, will be key and we’ll get a lot of confidence from that.”

Burns acknowledged that knowing the plan was coming and play it are two different things, highlighting the fact that the pace of New Zealand’s – around the low 130kph-mark without the injured Lockie Ferguson – presents a different challenge to when the ball is fired down at 150kph.

“We spoke it, they’ve done it to us and all sorts of different teams in the past,” he said. “We spoke about being clear how you want to play. It’s always disappointing when you lose wickets but credit to the New Zealand bowlers, to get through the overs they’ve done and get executing the short ball for long periods of time. It’s probably why they are No. 2 in the world

“It’s easier said than done to say you’ll come round the wicket, or for Wagner to bowl long periods of the short ball to that field, there isn’t much margin of error if you miss. If you bowl bad balls you’ll leak a lot of runs. Credit to them, it’s a big part of their bowling plans. As a batter you just try to wear them down, pounce on bad balls, but they didn’t miss too many times.

“It’s awkward because you feel like you can play it. At the speeds they bowl it’s challenging, different because they are asking you to play the shot to get off strike and you are bringing in all their catchers. Credit to them because they can execute it for a long period of time. They find a way to keep creating wickets when they flatten out.”