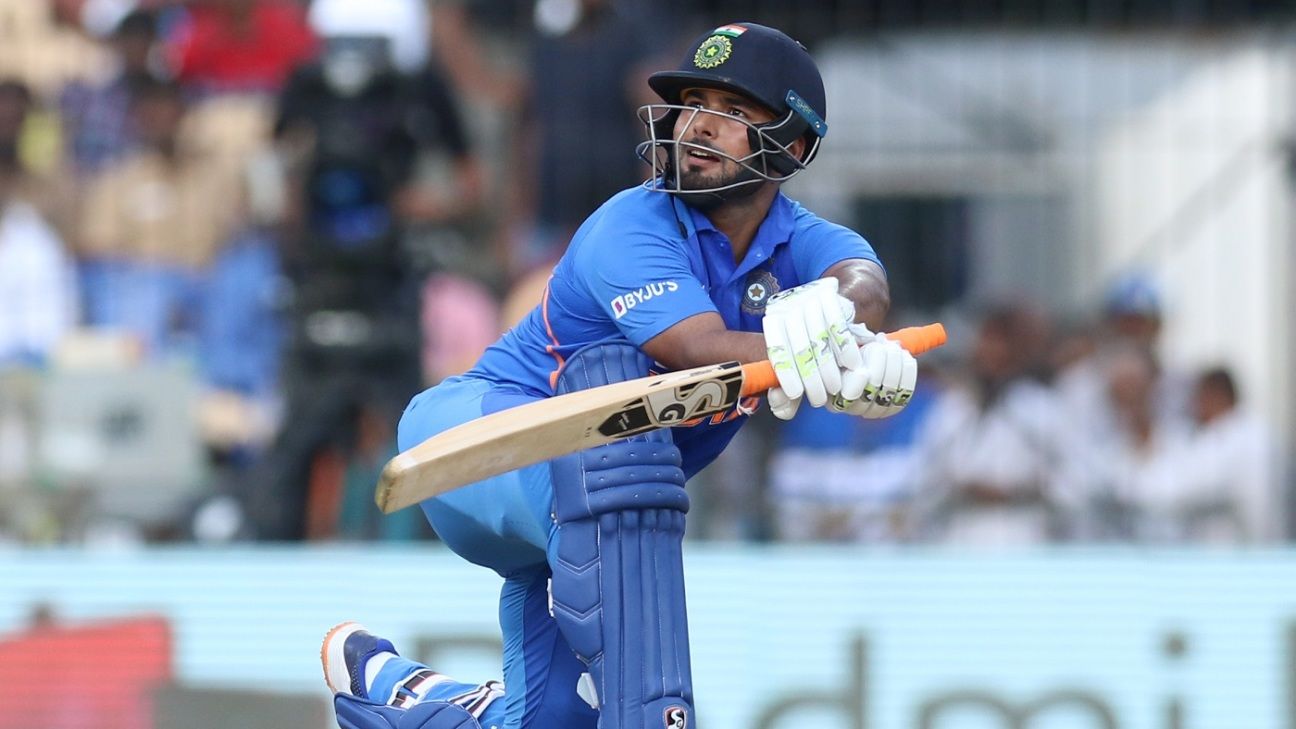 A 69-ball 71 in the first ODI against West Indies signaled a welcome return to run-scoring form for Rishabh Pant, and he said afterwards that playing “according to the situation” was his takeaway from his time in international cricket and that “there is nothing called natural game”.

The natural-game aspect has been a constant around Pant, the 22-year-old wicketkeeper-batsman, who has been blamed for throwing his wicket away with seemingly irresponsible shots. On Sunday, Pant batted with some degree of restraint but still scored at a rate of over a run-a-ball, lifting India from 80 for 3 to 194 in collaboration with Shreyas Iyer, who scored 70 in 88 balls.

West Indies have been found to have fallen short of the targeted over-rate in the first ODI in Chennai by four overs, resulting in the team being fined 80% of their match fee.

The charge was laid by the four officiating umpires and the penalty arrived upon by the match referee, David Boon. West Indies captain Pollard pleaded guilty to the offence after the match and accepted the proposed sanction, so there was no need for a formal hearing.

“When me and Iyer got together, we wanted to get a partnership going,” Pant said at the press conference after West Indies won by eight wickets to go 1-0 up in the three-match series. “We wanted to be together till the 40th over as we had lost three early wickets, and the 50-overs game is a long one. We thought if we are able to do that, we and the rest of the team would be able to capitalise on that.

“It’s my learning curve, and I am thinking that I want to do whatever I can to get a good score on the board and in the end I got some runs”

Pant, through his lean run over the past few months, has often been taunted by fans who have chanted “Dhoni, Dhoni” while he has been out in the middle, but in Chennai, Dhoni’s “home” in the IPL, there was a pleasant change for the youngster as the spectators shouted “Ree-shabh Pant, Ree-shabh Pant”.

“It is very important,” Pant said of the crowd support. “I was looking to improve every day but not getting there. I am not saying that I got there [today], but I am just trying to improve. It’s my learning curve, and I am thinking that I want to do whatever I can to get a good score on the board and in the end I got some runs.”

Rohit Sharma and Virat Kohli, among others, have voiced their support for Pant in recent weeks, while Ravi Shastri, speaking to India Today recently urged fans and critics to be patient with the young man.

“See, the guy is 20-22. He came in and in Test match cricket, he has got two or three hundreds already overseas,” Shastri said. “It’s a learning curve as far as Pant goes. He is destructive with the way he bats, he is a match-winner on a given day. But there are times when you come in to the game like the way he has and done what he’s done, you suddenly become a known quantity from unknown. That’s when the pressure starts building on you as a young player. Living up to expectations becomes a thing.”

Shastri also suggested that a return to the domestic circuit, where the Ranji Trophy is currently on, might be good for Pant. Speaking about his shot selection, one of the aspects of his batting under the most scrutiny, Shastri said, “But there’s time. He doesn’t have to do it all the time on the cricket field when he is playing for India. Sometimes, domestic cricket is good. There is less pressure in domestic cricket and playing domestic cricket and rediscovering themselves.

“He’s lucky that he has age on his side. India is lucky that they have got multi-taskers. You have got [KL] Rahul who can keep, Sanju Samson, MS in the background. [Wriddhiman] Saha in the Test match. There is talent there.

“He will come back tougher and stronger, if there is a need for that to happen. He doesn’t need to be spoken about as much as he is spoken about now. No! He is young, give him time. In five years, if he doesn’t set the world on fire, then talk about it.”

Responding to a question on the criticism he has had to deal with, Pant said, “As a player, I only want to follow my processes. I am aware of the talks – some are good and others not so good, but the more I concentrate on my job the better it is. You have to believe in yourself. It doesn’t matter what people say about you. At times, you will get runs, while that might not happen on other days. But the process is always important.

“The team management has told me to calm myself and keep improving the game and fitness. Basically improve in all aspects.”