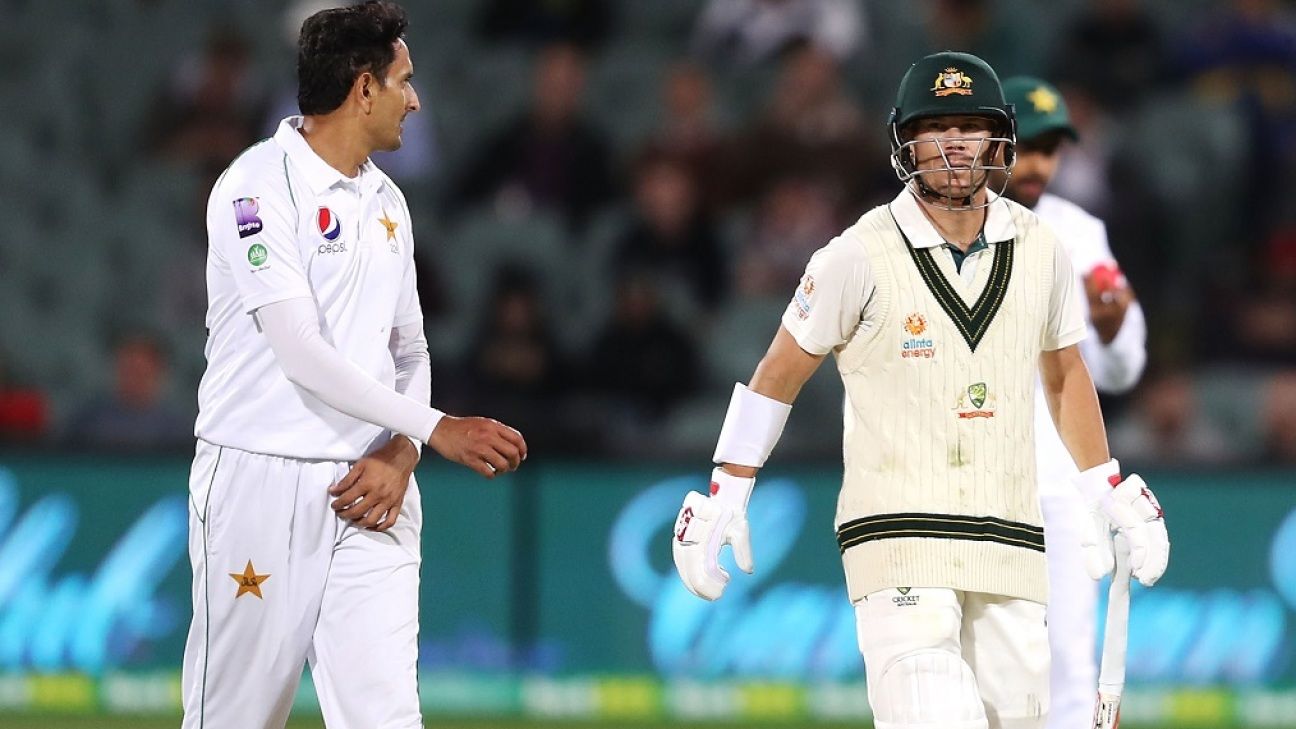 ‘Don’t judge a pitch until both sides have batted’ is an old adage in cricket. While it would be early to call the Adelaide Oval a flat deck, it is still noteworthy when one of Pakistan’s best seam weapons on tour says there has not been much help from the surface yet.

It is common perception that surfaces for day-night Tests are sprinkled with a generous green covering of grass to ensure the pink ball doesn’t scruff up and lose its hardness too early. On the opening day of the second Test, David Warner and Marnus Labuschagne waltzed their way to centuries, making light of whatever assistance there was from the pitch during the course of their unbeaten 294-run stand.

Playing for the first time in the series, Mohammad Abbas sent down 19 wicketless overs for 56 runs; the others barring Shaheen Afridi didn’t fare better either. Australia finished a truncated opening day on 1 for 302, comfortably reeling off their runs at 4.13 per over.

“Today was a tough day. In your home conditions, you know where to bowl and how to go about it,” Abbas said. “I came here and practised a lot. But we haven’t got the kind of help from the wicket that was expected. I tried to do my best and worked really hard. They were very confident and played me well too.

“I bowled a few maidens [six of them] and tried to bowl in partnerships but it didn’t go to plan. It’s a part of the game. At times, the batsmen are successful, at times it’s the bowlers. They were carrying forward the confidence from the last game. We couldn’t build control from both ends.

Abbas’s non-selection for the Brisbane Test raised a few eyebrows from different quarters of the cricketing circle in Pakistan. Waqar Younis, the bowling coach, hinted that it was a case of Abbas needing to regain lost confidence quickly to be considered. It perhaps resonated with the thoughts in the Pakistan camp: good enough to tour, not good enough to make the XI.

The stats back that theory – Abbas has taken just seven wickets in his last five Tests. But he didn’t seem to think the shoulder injury he suffered in New Zealand, which led to him being out of the game for 10 months, had contributed to his wickets drying up.

“I don’t think so,” he said. “There are ups and downs in a career. I started really well. But you know I got injured against New Zealand and it took me a long time to recover from that. I am bowling a lot and trying really hard. Hopefully, I’ll get back into rhythm very soon.

“I am not at all happy with my own performance. It’s understandable that I’m considered the main bowler. When you play Test cricket after 10 months, there’s a difference for sure and it takes a while to get your rhythm back. The match isn’t done. “

Abbas also said being left out of the first Tests “didn’t affect me too much”, and that there was no shame in the wicketkeeper standing up to the stumps, like Mohammad Rizwan did to Abbas on Friday. For some bowlers, it could be a blow to their ego. For Abbas, it was simply sticking to the team’s plan.

“That’s a plan for us,” he said. “If a batsman is struggling against my bowling, then he often stands outside his crease. It was a plan we’d tried in Dubai as well. That’s why I asked him to come up to the stumps. But there was little help off the pitch. You keep changing plans but it didn’t work.”